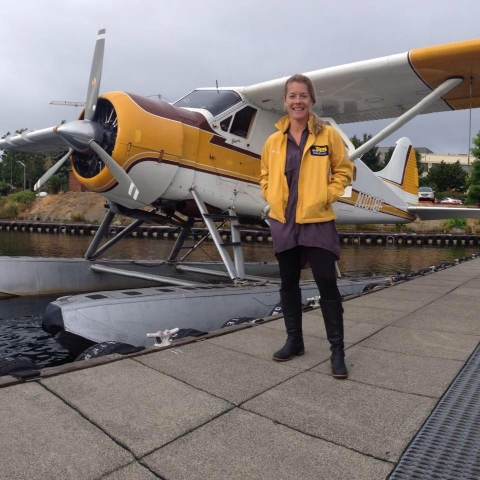 It’s been a week since I first learned that yet another Southern Resident Killer Whale, L-92, went missing and is presumed dead. I decided it’s time to say out loud what I’ve only grumbled about when my camera’s turned off.

I am skeptical of Governor Jay Inslee’s executive order to save the Southern Resident Killer Whales. It’s not because I’m a journalist who is wary of most pitches until action follows. It’s also not because the whales are now at historic lows with the most recent death of L-92 bringing them down to just 75 total, with less than half capable of reproducing. I’m skeptical because I have covered these whales for several years now and I’ve seen what it’s like behind the polished media curtain of task forces and staged press events. The view has dampened my hope. Simply put, many of those entrusted with the SRKW’s fragile future often appear more concerned about territory and ego than collaboration and change.

At least this is how it feels as the lone full-time television environmental reporter in Washington, one of the few in the entire country. And I want to qualify this by saying that I work with field crews like biologists and veterinarians and law enforcement all the time, and I’m beyond grateful for their passion and dedication. This message is not for those who put collaboration over control. It’s for those who prefer secrecy over transparency as a means of maintaining power instead of pursuing progress. If you’re confused by what I’m saying and have never heard of people like this, you’re probably one of them.

Let me explain first how I arrived at my sour grapes. The angst had been building for a couple years when a gray whale stranded on a beach in the Olympic National Park in 2017. I tried everything short of buying my own sea plane to get out there so we could tell the public about another sick whale. We agreed to remain a necessary distance away. We agreed to jump through every hoop presented, frankly. A couple groups tried to be helpful but several others worked very hard to keep us from any kind of access. Because making decisions about media coverage of whales requires more discussion and lobbying than it takes to pass a healthcare bill through Congress, we lost. In the end, we flew our helicopter over the whale as a last ditch effort at transparency.

We believe the public deserves to know about the plight of natural resources, especially those that need our help. After all, whales are not owned by the government or non-profits. These whales are wild animals who serve a higher purpose far from where any human can survive. They are God’s ultimately, and we are simply the stewards. But if we are going to use “belong” language for a second, let me be so bold as to say that these whales belong to the public. Their management is entrusted to the government. The government does not own them. Neither do non-profits with grant money from the government coffers which originates from tax dollars.

The more I try telling stories about the SRKW, or whales in general, the more I hear the same complaints from others. Bureaucracy and power posturing paralyze action while the whales continue to go extinct. It’s certainly paralyzing my ability as a journalist to rally the public to save these whales. Experts are afraid to tell the truth because they might lose their permits. Newcomers are scoffed at for introducing original ideas because, well, how dare they. Don’t they know the fate of the SRKW belongs to a select few for whom all others do the bidding?

Rarely if ever do the organizations most intimately involved in SRKW recovery contact me about media coverage. Same goes for all the other kinds of whales. Maybe a viewer will write us or a source will call me, I’ll contact a public information officer and they’ll make a few calls, and then when the story is entirely over or a whale is undeniably dead and a dozen department heads have been consulted, I’ll get to talk about it with five bad photos and a press release. It seems this is the trend with endangered species in general. The more at risk wildlife are, the more hesitant people are to talk about it. Why is this? Why are people so afraid? Why do journalists in my own newsroom continue to come up to me saying, “I had no idea it was this bad for the Southern Resident orcas!” It seems contrary to what wildlife need from us: awareness.

One time I told a state wildlife officer that it’s gotten so bad, I would rather stick my head out of a moving car and roll the window up on my neck than cover whales. It’s a problem when someone with my ability and platform and passion to engage the public instead dreads whale news, because I know I will make a bazillion phone calls only to get stymied in the end and waste a day that could have been spent covering wildlife for which advocates are not just willing but excited to work with the media.

As I attended Governor Inslee’s press conference when he announced his executive order to save the SRKW, I remember the scripted speeches and the applause and the dozen or so groups represented from state and federal agencies to tribes and non-profits. It was a rah-rah kum ba yah moment like many I’ve witnessed but this time with the real urgency of extinction propelling a “we can do it” moment like few I’d yet to see. And even then I rolled my eyes a little bit, hoping no one caught it, because I had a sinking feeling that nothing would change. When the event ended and we all returned to our daily routines, mine would include trying to tell the stories of these whales while many of theirs would include resistance to it.

I was right. Not even a couple weeks later, I was set up to do a story about dams and fish and recent efforts at habitat restoration that would bring back the vital food the SRKW need to stop starving to death. The day before, it fell apart. Again. One organization didn’t know I planned to come so another organization obscurely told me it wasn’t a good time, and then I heard the word I hear so very often: “politics”. I don’t know exactly what imploded but I was told that, once again, the issue was charged with “politics”. Then came the typical apologies for wasting my time, some of which I believe are sincere. The scales fall off the eyes of others just as they’ve fallen off mine. And then comes that feeling of powerlessness.

But there is power in truth and that’s why I am risking future collaboration by telling it. If a journalist can’t tell the truth, who can? Perhaps I will never get to cover another whale tale after this, but then again, I rarely get to tell the real story anyway. And if the SRKW pods go extinct, then I won’t have any stories to tell.

I hate to be a Debby Downer but I continue to lose hope that these whales will survive. I would love for history to prove me wrong someday. More than that, I would love for our entrusted state and federal management teams to prove me wrong. Listen, I understand the issues facing the SRKW are deeply complex, charged with political and economic undertones, following decades of bad human behavior that’s screwed up ecosystems to the brink of no return. I do believe many field staffers are working tirelessly to do whatever they can. Those charged with fixing the problem didn’t create it, and I sympathize with the uphill battle. That said, we’ve known these whales have faced extinction for decades, and yet their plight has only gotten worse. Knowledge of the problem does not seem to be the hold up. There are plenty of cooks in this kitchen, so why do plates keep coming out empty? Something has to change, and fast. If it does, I hope I will be there to shout from the mountaintops, “We saved the whales!” Until then, consider this my plea. Help me help you. Help all of us help the whales. President Truman once said, “It is amazing what you can accomplish if you do not care who gets the credit.”