2. "Oops, We Did It Again:" Federal agencies release a Draft Salmon Plan as bad as the last one.

Support SOS. Give to our end-of-the-year fund drive. All donations are 100% tax-deductible.

Last month salmon and fishing advocates delivered a second wave of official public comments to the U.S. Entity - led by Bonneville Power Administration and the Army Corps of Engineers. The Entity is tasked with delivering to the State Department a recommendation from Northwest states about if and how to renegotiate the Columbia River Treaty (CRT) with Canada. Save Our wild Salmon’s recent comment tally for the ‘Regional Recommendation’ reflects an even higher action alert response rate than the earlier ‘Working Draft’ action alert that circulated during the summer. Thanks very much to everyone who participated! Your active involvement helps send a clear message to decision-makers that a modernized CRT is important – and that getting negotiations started early in 2015 is a priority.

To be sure, some energy utilities and others industrial river users that rely on the Columbia dams for power are concerned about a “modernized” Treaty – and oppose adding 'ecosystem function' as a third Treaty purpose. The intensifying impacts of climate change and the need for justice for Native American tribes in the Columbia Basin (who were never consulted or considered when the first Treaty was approved in 1964) demands that ecosystem function - a healthy river - join power and flood control in a new 21st century Treaty.

What’s ahead: The U.S. Entity is expected to finalize its recommendation and deliver it to the State Department in December. Then its up to the State Department and the Obama Administration to decide how to proceed from there. Salmon and fishing advocates hope the Administration initiates negotiations with Canada early in 2014, and finalizes a new Treaty before the end of 2015.

In the meantime, steady work by salmon and fishing advocates will continue – reaching out to people, stakeholders and elected leaders in the Northwest and Washington D.C. to support a modernized 21st Century Treaty that protects and restores healthy Columbia Basin waters and watersheds on which all present uses of the Columbia and its tributaries depend, and that helps the people, businesses and communities of both nations join closely together to weather the large and harmful changes that climate change is now causing in our common waters.

2.  “Oops, We Did It Again…” NOAA takes a page from Britney Spears and releases the same failed draft salmon plan; salmon and fishing advocates call for a new approach.

On Sept. 9, NOAA Fisheries released its Draft Salmon Plan for the Columbia and Snake Rivers – also known as a biological opinion. Ordered by a federal judge after he rejected the previous plan in 2011 (the third in a row to be struck down in court since 2000), this disappointing draft once again misses an opportunity to follow the best science and meet the near-term needs of salmon and steelhead. It fails to look at any new measures, even those that the court explicitly directed the agencies to consider – such as securing greater river flows, lowering reservoirs to speed the migration of young fish, and removing the four dams on the lower Snake River. The draft plan even allows for the roll back of existing protections like spill. And it fails to address the impacts of climate change.

NOAA and its action agencies – the Army Corps of Engineers, Bureau of Reclamation, and Bonneville Power Administration – are now working on a final version of the Federal Salmon Plan, due on January 24, 2014.

As part of this process, NOAA sought input on their draft plan; huge thanks to all of you who submitted comments, urging the federal government to strengthen the draft and issue a final plan that does more to help salmon and move them away from the threat of extinction. Save Our Wild Salmon and 13 of our partner organizations also submitted comments to NOAA and we wanted to take this opportunity to share some highlights with you. You can read our comments in their entirety here.

We hope that NOAA and its federal partners, including BPA, will carefully consider the comments submitted by salmon and fishing advocates, and by the other two winning co-plaintiffs in the litigation over this very plan – the State of Oregon and the Nez Perce Tribe. Collectively, these comments provide a clear view of what a legal, science-based federal salmon plan could and should look like. If NOAA chooses to strengthen and improve its draft plan – by doing what the court directed them to more than two years ago – we could actually see some progress in the Columbia Basin, for salmon, communities, ratepayers, taxpayers, and businesses. But if NOAA opts to stick with a failed, and illegal, status quo, they will certainly risk another round of litigation. We’re continuing our work to encourage a lawful, science-based plan, but should the latter scenario prevail, we’re ready to keep fighting for what salmon need. 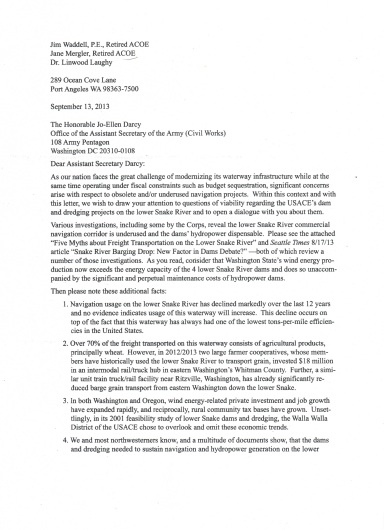 The Port of Lewiston's economic woes continue as calls for a new economic analysis on the lower Snake River waterway grow.

The Lewiston Tribune recently ran several stories noting both the decline in revenues and shippers shifting investments from barging to rail.   With shippers growing nervous about the long-term reliability of the lower Snake waterway, some farmers are beginning their own studies looking at transportation alternatives. Other shippers are putting their own dollars into infrastructure upgrades at the lower Snake River ports—in order to support rail, not the waterway.  MacGregor Co. recently invested $10 million into rail improvements for a fertilizer distribution center at Port of Wilma on the lower Snake River where 90 percent of the products will arrive by train, not barge.

In the midst of this economic transition away from barging, two retired Corps employees, including Jim Waddell who worked on the Army Corps’ 1999 economic analysis of dam removal and local citizen economist Linwood Laughy, sent a letter to the Corps of Engineers calling for a new cost/benefit analysis on the waterway to answer the many questions being asked about whether maintaining four federal dams on the lower Snake River for a declining barge system is worth the cost to taxpayers and local communities. Read their letter here.

Frustrated by the delays, mega-load shipper Omega Morgan and client GE withdrew their appeal and have sought routes through Oregon where they are again drawing opposition from local communities, climate change activists, and Native American Tribes. While the public debate over the future of the lower Snake River dams continues, significant shifts are quietly occurring, making the case that these dams are increasingly obsolete and not longer serve in the best interests of the region's people or its salmon.

Emerald Water Anglers’ owner Dave McCoy has been operating as a full service fly fishing outfitter in Seattle since 1999, and he’s now operating in Glenwood Springs Colorado as well. In addition to being highly regarded as an outfitter with an excellent team of guides and instructors, Dave and his team have been strong, active advocates for the cold, clean, free-flowing waters and healthy watersheds that wild salmon and steelhead depend upon. He’s been very supportive of not only Northwest fisheries conservation efforts, but programs across North America.

Fishhawk Fisheries: With processing facilities in Astoria, OR and Kenai, AK, Fishhawk Fisheries is recognized as a sustainable source of wild-caught salmon, shrimp and other fish.  The company is owned by 3rd-generation Astorian Steve Fick, a strong, long-time voice for Columbia-Snake wild salmon recovery. On more than one occasion Fick has taken time to travel to eastern WA to meet with farmers and shippers to explore common ground around issues of economic prosperity and Snake River dam removal.  Like so many other individuals who make their living in commercial fishing, Fick knows that if wild salmon are lost, so is his industry - an economic backbone for his homeown.  For more info:  (503) 325-5252.