5. SALMON MEAN BUSINESS! These businesses are generous supporters of SOS. 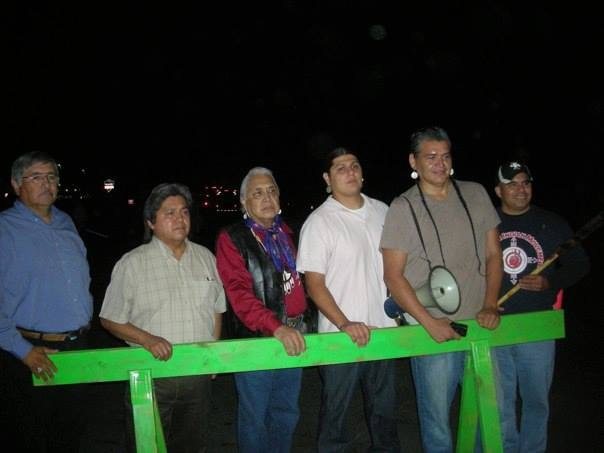 “We have no other alternative….If you turn the cheek once too often, you run out of face.” -- Nez Perce Tribal Chairman Silas Whitman

“Megaload” hauler Omega Morgan defied the Nez Perce Tribe and U.S. Forest Service the night of August 5th and began moving controversial tar sands equipment owned by General Electric from the Port of Wilma on the banks of the lower Snake River near Lewiston, ID on its route across the Nez Perce Reservation and Highway 12 along the Wild & Scenic Lochsa River.

Omega Morgan confronted a road blockade - 200 Nez Perce tribal members and supporters - at the reservation boundary at midnight. Led by the Tribe’s Council, Nez Perce of all ages flooded the highway and stopped the looming mega-load for over two hours. Tribal leaders, elders and supporters were arrested amid drumming and chanting.

“We have to make a stand. We’ve tried every way diplomatically. People aren’t listening,” said Chairman Silas Whitman at a press conference before the blockade. Whitman noted that calls to the Idaho Governor and elected officials were met with silence.

I traveled down to Lewiston Monday evening to represent SOS’ support for the Nez Perce Nation. Personally, I’ve never witnessed anything as powerful. Elders, children and young people sat down on the road, blocking passage for a looming piece of equipment amid the flashing lights of police and a mega-load motorcade.

Eventually police cleared the road and the mega-load managed another 3 miles on its journey. On the second night, it met another blockade. Given a 5-day permit to get the load to the Montana border at Lolo Pass, Omega Morgan was days behind schedule. It violated its travel permit numerous times, refusing to pull over for traffic to pass and forcing cars to wait for hours in some cases.

The Nez Perce Tribe and SOS partner Idaho Rivers United have filed a lawsuit against the U.S. Forest Service for not enforcing their authority to regulate the loads in the Wild & Scenic river corridor and have asked for an injunction to stop any more trucks form rolling until necessary reviews occur. The U.S. Forest Service will consult with the Nez Perce Aug 20th. The first court hearing is scheduled for Aug. 27th.

Omega Morgan wants to move the second mega-load sitting at Port of Wilma by September 1. Eight more loads are reportedly on their way to the Port.

Save Our wild Salmon supports Nez Perce efforts to stop this equipment from reaching the Tar Sands mining operations in Alberta, a significant contributor to climate change and threat to Canada’s First Nations. Mega-loads threaten the health of the federally designated Wild & Scenic Lochsa River – home to ESA-listed salmon and steelhead.

Halting these shipments relates directly to SOS’ longstanding efforts to restore wild salmon and steelhead to the Columbia-Snake Rivers by restoring a free-flowing lower Snake River.

The lower Snake River Ports of Lewiston and Wilma are courting Big Oil to bring these loads up the Snake River. It’s a desperate attempt shore up shipping business for a waterway that is declining in viability and value to the region. More information on the upside-down economics of the waterway here. With fewer goods shipped on the river over time, the Ports are effectively asking local and national taxpayers to subsidize Big Oil transport costs to move loads that are environmentally, legally and morally objectionable.

The high taxpayer costs of maintaining this marginal shipping channel will increase even further if the Corps of Engineers moves forward with its plans to dredge the lower Snake waterway in the short-term, and raise levees in the long term. The Corps of Engineers is expected to release its final Sediment Management/Dredging Plan within the month. Dredging is both expensive and extremely damaging to salmon habitat and clean water.

Meanwhile, for the third week in a row the water temperatures behind the Snake River dams hit 70-plus degrees, conditions that can be lethal to salmon. As regional temperatures rise this summer, the water behind the dams will become even hotter – and more harmful for endangered salmon and steelhead and other native species. More information on 'hot water' is available here.

In the short-term we need to stop the mega-loads. Longer term, we need an honest assessment of what’s best for taxpayers, the lower Snake waterway and the wild salmon and steelhead that travel through it. It may not be four aging dams.

2.    Thanks to you, the U.S. Government’s Columbia River Treaty “Working Draft” recommendation has come under fire during summer comment period.

The U.S.-Canada Columbia River Treaty was first negotiated in the middle of the last century; hydropower operations and flood control were its sole purposes. Neither fish and wildlife nor the health of the ecosystem were considered. Columbia Basin treaty tribes were not even consulted at the time nor was there any consideration of the interests of other communities who depend on the benefits of a healthy watershed.

The Treaty is now up for re-negotiation, and the two federal agencies – Bonneville Power Administration (representing hydroelectricity) and U.S. Army Corps of Engineers (representing flood control) - are leading efforts to develop the government’s position before the U.S. State Dept. heads into negotiations with Canada.

This impending re-negotiation presents a huge opportunity to assure that a renewed Treaty reflects 21st century values, knowledge and economies. "Ecosystem function" can and should join power and flood control as a third Treaty purpose - to use as a tool to rebuild endangered salmon and steelhead populations, restore watersheds damaged by dams, and respond effectively to the intensifying impacts of climate change.

The public comment period for the 'June 27 Working Draft' just closed; thousands of people registered their strong opposition to the Working Draft’s current language (a HUGE THANKS to all of you who weighed in!!!). We expect one final updated Draft from the government to be released for public comment in September. So we may ask you for your help one more time to help improve the United States' starting position for negotiations and the prospects for a modernized Treaty. SOS and allies have been meeting with members of Congress and other elected officials this month to communicate our serious concerns with the Working Draft. You can view a copy of the letter that SOS and the NW Energy Coalition submitted jointly as our official public comment on August 14.

SOS and allies will continue reaching out directly to decision-makers in the Northwest and Washington DC; and it is essential that your voices - thousands of people supporting ecosystem function in a modern Treaty - also continue to be heard. Thanks again!

Finally, here’s an article from north of the border about the Treaty and its potential to bring salmon back to ancestral spawning beds in British Columbia. Before the construction of Grand Coulee Dam on the Columbia River in the 1930s, Chinook and other salmon returned in huge numbers to British Columbia. No longer. But a truly modernized treaty could help change that.

Last month, we reported that federal agencies would submit a new draft biological opinion or Federal Salmon Plan to the court and public at the end of August. We recently learned that the draft of this “new” plan will not be released until mid-September. Unfortunately, news of this two-week delay does not include any indication that Bonneville Power, Army Corps of Engineers, and Bureau of Reclamation will use this extra time to strengthen the plan, include an expanded spill program, complete a comprehensive analysis of lower Snake River dam removal as requested by the court back in 2011 when the first Obama Administration plan was ruled illegal, or take any number of other actions to ensure that this new plan will finally meet the needs of salmon, fishing communities and the law.

We’ll keep you posted as we learn more.

4.    RIVER RESTORATION ROUND-UP: News on dam removals, rivers, and fish from around the nation. 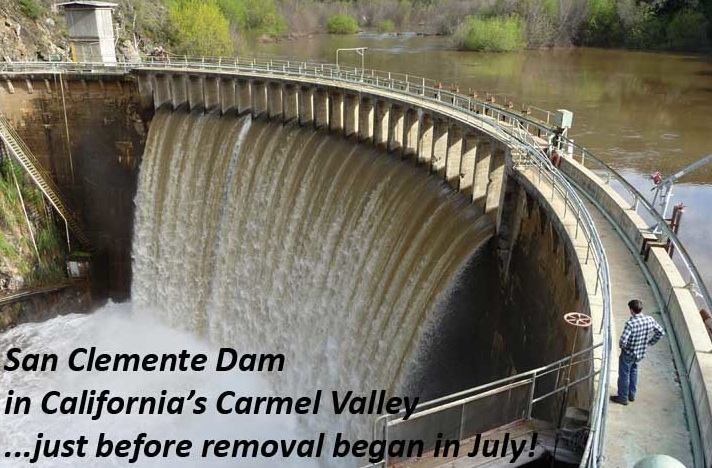 B. National Geographic on the removal of the Penobscot River’s Veazie Dam (7.22.2013)

A large part of the strength of Save Our wild Salmon derives from the diversity and depth of our allies and supporters. Here are three businesses that have been very supportive of SOS over the years.  We rely on the support of many allies, including these businesses, and would like to express our thanks to them. We also encourage you to support them by giving them the - your - business!

Monterey Fish Market (San Francisco, CA): Paul Johnson is the founder and owner of the Monterey Fish Market and has long been a great friend of SOS and other conservation and fisheries advocates. MFM includes a wholesale market on San Francisco's Pier 33 and a retail outlet in Berkeley. Paul promotes sustainably captured fresh fish and encourages ocean conservation, and authored an excellent guide to fish, cooking, and conservation, Fish Forever.

Jensen's Old-Fashioned Smokehouse (Seattle, WA): Mike Jensen grew up around his parents' retail smokehouse in Bremerton, Washington. Graduating from the University of Washington with a business degree, Mike jumped at the opportunity to purchase a small meat market in North Seattle. Jensen's reputation as Seattle's premier smokehouse has developed over the last 25 years. In addition to producing excellent food, Mike has also generously supported Save Our wild Salmon with donations of delicious smoked salmon for many events over the years. Mike sells his fine products at a retail shop and online.

Chris grew up fishing and hunting the lower Snake River area before Lower Granite dam was built. He has a deep appreciation of what was lost when the four dams were built--beautiful river breaks offering great habitat for gamebirds and deer, as well as plentiful wild salmon and steelhead runs. Chris is a dedicated wild salmon and steelhead advocate - he has met with senators and governors, underwritten SOS events and lobbied his friends and peers to support removal of the four lower Snake River dams for years.

Most recently, he's been working on a film that weaves together his love of mountains and wild salmon called Wisdom Earned. Check out the trailer here.