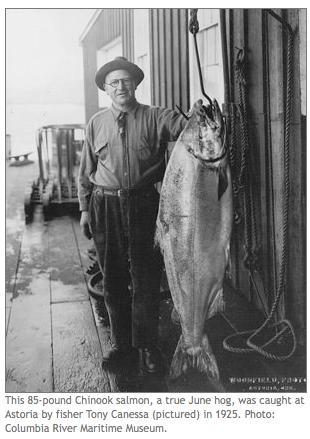 We have a whopper of an update for you this month.  Okay, maybe not as big as that guy over there -> but close.  We've got reactions to President Obama's salmon plan, a great story from Daniel Jack Chasan, an important update on Washington State's efforts seeking leadership from their senators, and this month we celebrate a key member of the marine ecosystem - the orca.
Read on...
Note: Pictured here is one of the legendary June Hogs, the largest salmon ever caught in the Columbia River and maybe the world. Some fish grew to three to four feet in length and weighed 75-100 pounds. These salmon were wiped out with the completion of Grand Coulee Dam in 1938.
1. Reactions to Obama's Salmon Plan
Communities around the Northwest and nation express disappointment with another do-nothing plan.
2. Let's really talk about taking down those Snake River dams
Are you listening, Senators Murray and Cantwell?
3. One-of-a-Kind Project / National Geographic Global Action Atlas
National Geographic launches new interactive website, highlights the incredible migration of the one-of-a-kind Snake River salmon.
4. Are you listening, Senators Murray and Cantwell?
Business and community leaders in Washington State make public call for leadership in Snake River salmon crisis
5. Celebrate Orca Month! - new video on Salmon and Orcas

1. Reactions to Obama's Salmon Plan
Communities around the Northwest and nation express disappointment with another do-nothing plan.
In late May, as you may recall, just one month after oil began spilling into the Gulf of Mexico — crushing wildlife and fishing communities — and on the eve of Endangered Species Day, the Obama administration announced that they are sticking with the Bush administration's failed 2008 analysis and strategy for endangered wild salmon on the Columbia and Snake rivers in the Pacific Northwest rather than employ sound science and follow the Endangered Species Act, and actually protect and restore these tenacious but critically endangered fish.
Since that time, folks from across the country have been expressing their clear disappointment with the Administration's failure to change the status quo for salmon, salmon-dependent communities, and American taxpayers.  Read some of the reactions below and don't forget to TAKE ACTION.

"I have deep concerns that this revised plan does not include sufficient improvements over the 2008 version to accomplish its purpose of protecting salmon," said "An issue as complex and important to our way of life as Columbia Basin salmon restoration requires more than just minor changes—it requires a renewed commitment to following best practices and the very best science. This plan falls far short of what's needed to put imperiled wild salmon and steelhead on a path toward real recovery."
- Congressman Jim McDermott (D-WA). More from Rep. McDermott.

"This is a disappointing decision from the administration. These fish are truly one-of-a-kind — the only salmon on the planet that travel as far and as high. Their habitat is equally unique, providing the largest, wildest, highest, coldest salmon habitat in the lower 48, and our best chance of protecting and restoring Columbia and Snake salmon in the face of climate change. We can recover salmon and restore the Snake River in a way that works for local communities and the region's economy, and we should embrace that path, not shy away from it."
- Rebecca Wodder, President of American Rivers

"We believed the President when he said he would follow science and strengthen the ESA, but the administration has seemingly allowed regional political pressure to trump science and law. Tomorrow is Endangered Species Day. We should be celebrating and working to protect America's endangered species, but instead, for Columbia Basin salmon, we're mourning. Even so, make no mistake — we're not done fighting to save species like wild salmon. They are simply irreplaceable."
- Brock Evans, President of the Endangered Species Coalition

"It's sad, but clear, that NOAA and its fisheries service have not gotten the President's message. Their actions tell us there has been no change from the disastrous policies of the past 15 years that failed to protect endangered fish while endangering fishing jobs and fishing economies. Fishing communities deserved better than this.
- Zeke Grader, the executive director of the Pacific Coast Federation of Fishermen's Associations.

"The administration has chosen to wear blinders regarding the impacts of climate change on salmon. The science tells us that our rivers and lakes are warming. This administration had an opportunity to confront this problem and to protect salmon from the impacts from climate change. Instead it elected to ignore the impacts and defend a discredited strategy written by the previous administration."
- John Kostyack, the executive director of the National Wildlife Federation's Wildlife Conservation and Global Warming program.
2. Let's really talk about taking down those Snake River dams 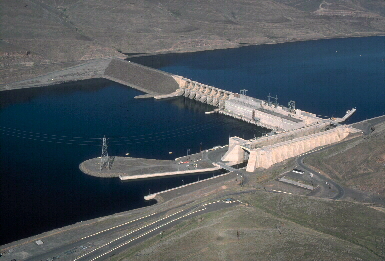 "Economic effects have long been cited as reasons to keep the dams in place. While some inland businesses and farmers are willing to look at how dam removal could work for their communities, the leadership for a larger conversation has been missing. Are you listening, Senator Murray?" A clip from Daniel Jack Chasan's recent article on the political dynamics surrounding Columbia and Snake River salmon.
Read on.
3. One-of-a-Kind / National Geographic Global Action Atlas
National Geographic launches new interactive website, highlights the incredible migration of the one-of-a-kind Snake River salmon. 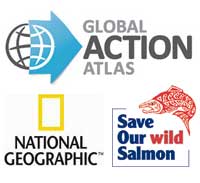 The wild salmon and steelhead of the Snake River Basin are an incredible story of nature that began over 100 million years ago. For millennia, these salmon and steelhead have fulfilled the challenge of climbing higher and higher to return to their alpine homes to spawn, making them the mightiest of all salmon. Their offspring have become stronger, more determined, and more Olympian with each generation.
And these salmon are truly unique to this planet. They are one-of-a-kind. Did you know that the Snake River sockeye salmon and steelhead journey of more than 900 miles is longer than that of any other sockeye or steelhead in the world?  Their journey, and that of the Snake River chinook salmon, is a climb of over 6,500 feet. This is the highest climb of all salmon on the planet; it brings them to the highest salmon spawning habitats on earth, and the largest and wildest habitat left in the continental United States.  This one-of-a-kind place – nestled in the Rocky Mountains of central Idaho, northeastern Oregon, and southeastern Washington, is a virtual “Noah’s Ark” for salmon – if we can get them there, they can and will thrive.

We – our generation – are the ones who will decide whether these one-of-a-kind creatures continue to exist for our children and for generations beyond.  With that in mind, Save Our Wild Salmon, with the help of National Geographic and others, has launched a project to tell this story to the nation.  Please help us spread the word.

Check out National Geographic's Global Action Atlas.
While you are there, become a fan of Save Our Wild Salmon's page.  Ask your friends to do the same. Take Action: Send a message to President Obama urging his leadership to recover these one-of-a-kind salmon.  After you take action, please forward the action to your friends and family.

Check out the "One of a kind" project narrative.
4. Are you listening, Senators Murray and Cantwell?
Business and community leaders in Washington State make public call for leadership in Snake River salmon crisis

Yesterday, over 120 business owners and community leaders in western Washington State wrote to U.S. Senators Patty Murray and Maria Cantwell urging their leadership in solving the Northwest salmon crisis. The open letter to the senators also appears as a full-page ad in today's Puget Sound-based weekly - the Stranger.
The letter signers include over 50 businesses, 40 community leaders, 20 organizations, and several prominent local scientists.
Check out more on the letter at Working Snake River for Washington
5. Celebrating Orca Month
Partners in Washington state work to recover Southern Resident Killer Whales of the Puget Sound 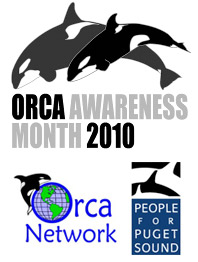 From the Kitsap Sun: "A new orca calf has been born in K pod, one of the three groups of killer whales that frequent the Salish Sea and Puget Sound, experts say.  The young calf, designated K-43, was spotted Tuesday swimming with K-12, presumed to be the mother, according to biologists with the Center for Whale Research.  All three groups are beginning to settle in for a summer of fishing in and around the islands. J pod and portions of L pod have already arrived, but both pods have been coming and going, apparently not finding many chinook salmon, experts say." Read more from the Kitsap Sun.
Special Note:  Ken Balcomb from the Center for Whale Research and the folks at Working Snake River for Washington asked us to relay a very important message: this baby will not have future without more chinook salmon. Salmon make up the majority of their diet and they are good at finding and catching them; but, what happens if salmon populations continue to decline? As Ken makes plain: "No salmon = no orcas."