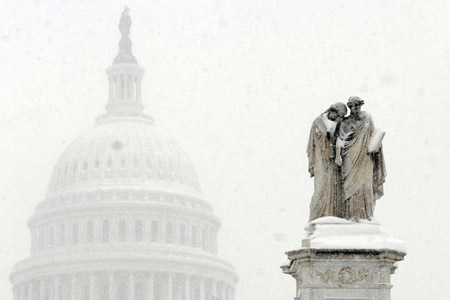 1. House passes all anti-salmon provisions.
Dear Senate: Don't let Pacific salmon and jobs get the pink slip.  Take action today.
2. Politics trumping science, more jobs at risk.
Paul VanDevelder's very enlightening oped in the Oregonian, a radio story with Steve Hawley, Letters to the Editor, and some thoughts from our own Nicole Cordan.
3. Next steps for Obama's salmon plan in court.
Salmon community braces for a decision, hopes for real change.

1. House gives salmon and jobs the pink slip.
The funding bill is now before the Senate - please take action today.

Last week we reached out to you regarding several dangerous provisions in the key congressional funding bill - the Continuing Resolution, HR 1.  We received a huge response - thank you for your efforts.

We need your help again.

Unfortunately, the House version of the Continuing Resolution passed with all of the anti-salmon, anti-jobs provisions intact.  The bill is now before the Senate.

As it stands, the bill includes specific language that, if enacted, would eliminate all funding for science-based measures designed to protect salmon populations in California’s Sacramento-San Joaquin Basin and crucial actions needed for Klamath River restoration.

Please contact your Senators and urge them to end the attacks on salmon and jobs.

2. Politics trumping science puts more jobs at risk.
Paul VanDevelder's very enlightening oped in the Oregonian, a radio story with Steve Hawley, Letters to the Editor, and some thoughts from our own Nicole Cordan.

Oregonian - The reckoning: A looming decision on endangered salmon will set the stage for momentous battles over the future

*This important piece from Paul VanDevelder highlights the work of Obama administration officials and key Members of Congress - Commerce Secretary Gary Locke (former Governor of Washington State), Lorri Bodi, Senior Policy Advisor on Fish & Wildlife for the Bonneville Power Administration, and the offices of Washington Senators Patty Murray and Maria Cantwell among them - to subvert salmon science and restrict the dialogue with the people whose very livelihoods depend on salmon...
OpEd from the Sunday Oregonian, February 13th, 2011
By Paul VanDevelder
Sometime this spring, a federal district court judge in Portland will render a decision based on the federal Endangered Species Act that will determine the fate of two dozen endangered salmon stocks that spawn in rivers from Sacramento to British Columbia. Just another ho-hum environmental lawsuit? Don't bet on it.

Judge James A. Redden's decision promises to be as momentous as any court-ordered environmental remedy in our lifetimes, the Dred Scott of environmental law. Of the many battles waged in the wake of the Endangered Species Act, no other beast, fish or fowl has created a more politically charged -- or more expensive -- fight than West Coast salmon.
Read more of VanDevelder's OpEd.
-------

Public News Service - Author Steve Hawley provides some perspective on salmon declines in the Columbia and Snake Rivers:
"What the record shows, and the story that my book tells, is there are entrenched sets of political and economic interests that have really worked hard to badly bend, if not outright break, the laws that are mandating that we not let these species go extinct."
Listen to the story here.

SOS Blog: Jobs. Jobs. Jobs. Jobs. Jobs.
Nicole Cordan, Policy & Legal Director for Save Our Wild Salmon, ties some current events together.
We hear a lot from the White House and Congress about protecting jobs and creating jobs. About innovation. About “winning the future.” But, when it comes to salmon, our decision-makers are both failing to create new jobs and also to protect the few we already have. We are continuing the failures of the past, not winning the future.
Read more.
-------

Letters to the Editor: High Country News and the Oregonian
Salmon got your tongue?
From Bob Rees, President of the Nothwest Guides & Anglers Association, to High Country News:
Judith Lewis Mernit's "Obama and the West" was strangely silent on the administration's track record on Northwest salmon (HCN, 2/7/11). Maybe that's because it doesn't fit neatly into the theme of "slow but steady progress." Columbia Basin salmon -- and the communities that rely on them -- have suffered mightily since the nation's first salmon population, Snake River sockeye, was officially listed under the Endangered Species Act 20 years ago.
Read more over at High Country News.
Oregonian Letters to the Editor - Salmon recovery: The reckoning
I appreciated reading Paul VanDevelder's opinion piece highlighting attempts to suppress science in the management of the Columbia and Snake rivers ("The reckoning," Feb. 13). In the long term, suppression of scientific evidence has repercussions beyond just tarnishing federal agencies. Manipulated salmon science leads to misinformed and flawed salmon policy. Resulting salmon declines make for lost jobs in our region. And this pretty well sums up the federal track record of the past two decades in the Columbia and Snake rivers. The fact that one of Oregon's own, NOAA Administrator Jane Lubchenco, is caught up in this mess adds insult to injury.

The people of the Northwest deserve a part in the discussion of how to move our region toward a solution that recovers salmon while protecting communities. And we deserve a chance to let science, not politics and manipulation, guide our decisions. The Obama administration hasn't yet given us that chance.

3. Next steps in court for Obama's salmon plan
Salmon community braces for a decision, hopes for real change.

As mentioned in Paul VanDevelder's piece above, communities in the Pacific Northwest and across the nation are awaiting a key ruling from federal Judge James Redden on the Obama administration's salmon and steelhead plan for the Columbia and Snake Rivers.  Though Redden has yet to set up a timetable for the next steps, oral arguments will likely begin sometime in March or early April.

For those of you just tuning in, we have arrived at a critical juncture.
Over the last twenty years, the federal government has spent over $10 billion public dollars on policies that have failed to protect wild salmon and steelhead in Columbia and Snake Rivers and the communities that depend upon them.  Much of this time and money has been spent mitigating towards extinction while avoiding the four elephants in the room: the lower Snake River dams.

And the past two years have unfortunately seen a continuation of the status quo for salmon policy from the Obama administration.  They stuck with the old Bush-erc salmon plan, adding a supplemental document that has since been panned by scientists in the West.
This decision by the Obama administration comes after plenty of extra time from Judge Redden and the comments of more than 70 members of Congress, 3 former Northwest governors, hundreds of local and national businesses, thousands of scientists from around the country, the State of Oregon, the Nez Perce Tribe of Idaho, thousands of commercial and sports fishermen across the Pacific Rim supporting a stakeholder-driven solution and an "all options" approach to the crisis facing wild salmon and steelhead in the Pacific Northwest.  Since that time, tens of thousands of salmon, clean energy, and taxpayers advocates nationwide have sent messages to the Obama Administration to continue this call.
With the Obama administration setting the recovery bar for wild salmon and steelhead so dangerously low, the upcoming decision in federal court now has huge implications for the Endangered Species Act and conservation efforts across the country.  In addition, thousands of jobs hang in the balance.

The Northwest and the nation deserve a forward-thinking plan from the Obama administration that includes a broad set of initiatives and sound investments to provide alternatives to the four lower Snake River dams. By working with affected stakeholders to develop a legally and scientifically sound salmon plan, the administration can restore wild salmon to abundance, create good jobs in farming and fishing, and build a truly clean energy economy for future generations.