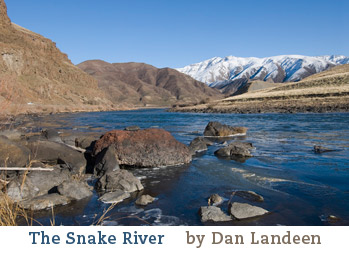 Faced with overwhelming scientific opposition (from independent, federal, state, and Tribal fisheries biologists) as well as public opposition (from at least half a dozen regional newspaper editorials) to its plan to eliminate spilling water over federal dams on the Snake River during a key portion of the 2010 salmon migration, the Obama Administration announced that it will - for now, at least - drop its proposal and continue spilling water throughout the spring.  Spilling water over dams means that more juvenile salmon and steelhead will arrive safely and healthy at the Pacific Ocean, and that boosts future adult salmon returns.

This reversal by the Obama administration represents a major victory for salmon, fishermen, and science!Despite the Administration’s change of plans regarding spill this spring, serious questions remain about its overall salmon policy, and its commitment to science and the health of our fishing communities. While federal agencies have agreed to continue spill for now, they reserved the right to roll it back at any time during the balance of the spring migration. Nor have they yet committed to summer spill (June-August). We’ll be keeping a close eye on what happens going forward. However, the region may face further clashes with the Administration over spill levels during the migration this spring and summer.Up Next: Spill, Science & Stakeholders – A Test for the Final Salmon Plan Due in May.

The Obama administration’s next big step for Northwest salmon will come on or around May 20 when it is expected to deliver its revised Columbia/Snake federal salmon plan (or biological opinion) to U.S. District Judge James Redden. Unfortunately, despite the judge’s numerous requests, there is little evidence to suggest that this amended plan will be any different substantively from original 2008 federal salmon plan.  As you may recall, the role of science and transparency – hallmark promises of the President - in the development and revision of this salmon plan has been – and remains - completely insufficient.  More on the "science" of Obama's plan.

This revised plan can help meet the test of science and transparency, as well as do what the law requires, by taking at least the following steps:

End the costly and unnecessary annual arguments over whether “to spill or not to spill?” The science is clear - spill improves survival for fish that migrate in the river and more spill would be even better.  The federal agencies should commit to a full spill program  -- and increase spill too -- during each and every salmon migration for the ten-year duration of this plan.

Heed Judge Redden’s specific call for a thorough and up-to-date climate change analysis. The current salmon plan must be changed so that it no longer uses the past twenty years as a predictor of the next twenty years – the latest science tells us that this backward-glance approach simply doesn’t work. River and ocean temperatures are already rising.  As the climate continues to change, we will need to do even more to increase river flows, restore habitat, and help salmon survive their migration to and from the ocean.  The revised plan must take concrete actions to address this reality, not pretend it doesn’t exist.

The science is clear that dam removal is the surest and best option to protect Snake River salmon.  The new plan should require the federal agencies to move forward with removal of the four lower Snake River dams by 2015, including initiating immediate, comprehensive studies to understand and prepare for dam removal.  If the salmon show us that this action is unnecessary, the actual removal can be stopped, but we should be ready to move forward if salmon are continuing to decline

Convene stakeholders to work together to craft a lawful, science-based blueprint that both works for people and protects and restores healthy salmon populations.

People For Puget Sound's Kathy Fletcher knows that orcas are a critical part of Puget Sound's ecosystem, and that Columbia-Snake Basin chinook are essential for their survival. On April 12, she took the Obama administration to task -- again -- for its apparent lack of interest in saving the endangered orcas.

Puget Sound's Southern Resident killer whales (or orcas) were listed as endangered in 2005. Since that time, NOAA Fisheries has known that inadequate food is a primary reason for the orcas' decline. And yet NOAA continues to avoid even considering the action – removal of the four lower Snake River dams - that has the enormous potential to provide these spectacular, intelligent marine mammals with enough of their main food – chinook salmon.“The Southern Resident Killer Whales will go extinct without more chinook salmon. The orcas and the people of the Northwest who care about their fate deserve a plan for the Snake and Columbia River’s fish-killing dams that protects and restores our salmon and our resident killer whales.” – Kathy Fletcher, People for Puget Sound

3. LAST CHANCE for Hot Pants / Cool Rivers - Mountain Khakis and SOS Photo Contest: Send us a photo of your favorite river for your chance to win some great gear!

Save Our Wild Salmon has teamed up with Mountain Khakis to highlight our shared love of free-flowing rivers.  To show their support for the Snake River and its salmon, and celebrate all the beautiful rivers to be found around the world, Mountain Khakis is giving away some sweet gear and clothing throughout the month!

Between April 5 and April 30, send us a photo of your favorite river. As a little incentive we'll be featuring a photo on the Save Our WIld Salmon and Mountain Khakis blog each week and we'll be giving away some cool Mountain Khakis gear!

On April 30, we'll give away our grand prize - a product from MKs new Snake River Collection!

Entering is easy! To submit, upload your photo(s) to the Save Our Wild Salmon Flickr Pool. Make sure your photo has a title and a description. We look forward to seeing your work and the rivers that you love!

To win you must be a U.S. resident or have a U.S shipping address. Sorry, rest of the world!