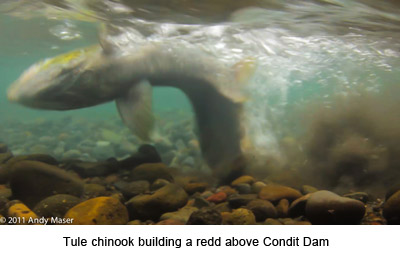 2. Dams are falling (but the sky is not) - Elwha, Condit, and the Year of the River. 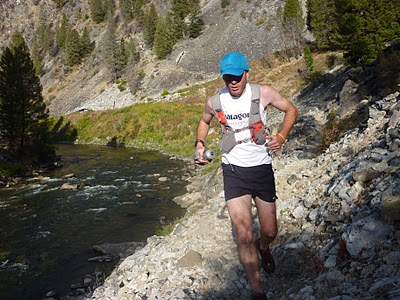 As you may recall, last weekend endurance athletes Luke Nelson and Ty Draney set off along the Middle Fork of the Salmon River into the Frank Church / River of No Return Wilderness in central Idaho.  Their mission: cover over 120 miles of rugged terrain - with an elevation gain approaching 20,000 feet - in less than two days, all to raise funds and awareness for SOS' campaign to restore Columbia-Snake River salmon. In a nutshell, they made it.  What was thought to be 120 miles turned out to be closer to 140.  But it sounds and looks like it was quite an adventure.  Click through the stories below to find out more. It's not too late to donate to this project.  Please give what you can to help our cause: Donate Here. 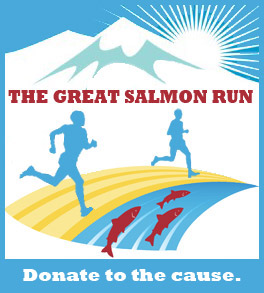 "The restoration of salmon has a lot more to do with than just saving fish. It brings back jobs. It brings back cultural aspects that have been lost," said Luke Nelson.  Read more >

From Luke Nelson's blog, The Challenge of Balance: We kept pressing forward now with darkness settling in for a second time during the trip, our bodies ached, but we knew it would be too cold to hunker down near the lakes at nearly 9000'.  We had to keep moving.  Just as the sun set we heard an amazing sonnet of an elk bugling quite near to where we were, we joked that he was cheering us on, but now I think he was trying to warn us‚Ä¶ More > From Ty Draney's blog, El Vaquero Loco: The thought of warm food at the Flying B kept us plodding on, excited to get off our feet and fill our bellies. It became painfully obvious by 9 p.m. that our progress was going to be too slow-we weren't going to be able to make dinner. About 7 miles short of our goal, approximately 60 miles into our trip we decided to sleep on a beach along the river. There was a group there already but they graciously gave us a spot by the fire, and some tube steaks. Never did a hot dog taste so good. More >

2. In the Northwest, dams are falling (but the sky is not)

Elwha, Condit, and the Year of the River. 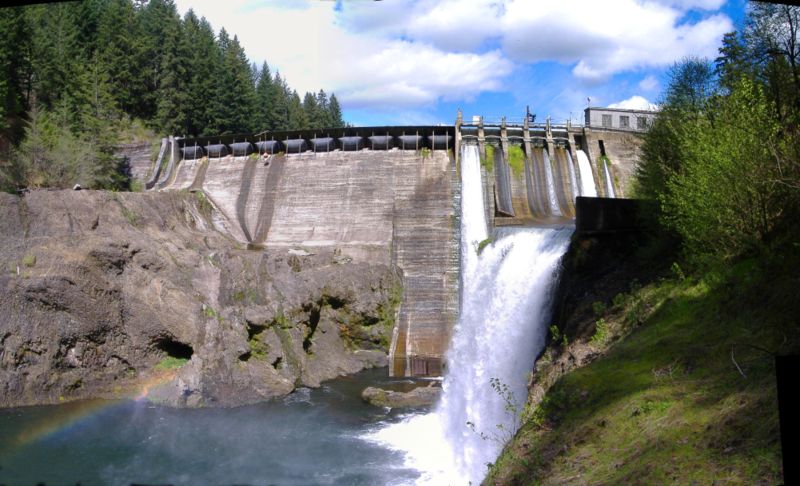 While dams across the country are being removed to restore healthier, free-flowing rivers, in many ways the Northwest - and especially Washington and Oregon - has taken the nod to become the epicenter for the movement these days.

September on the Elwha: Amid much fanfare last month, the restoration of the Elwha River ‚Äì throttled by two gigantic concrete walls for 100 years ‚Äì began with massive jackhammers and backhoes. The removal of America‚Äôs largest dams yet will require about 2.5 years to complete. During its pre-dam glory, the Elwha River drainage was a premier salmon and steelhead river - home to more 400,000 fish each year; 100-pound chinook as well as chum, sockeye, coho, pinks, and steelhead. Restoring this river is expected to generate over time the greatest salmon restoration this country has yet seen.

While there are some emerging debates and disagreements about techniques being used to restore salmon and steelhead populations, such as the sources of fish being used to repopulate the basin and whether the use of hatcheries in this case is a wise choice, Save Our Wild Salmon is excited about this project and the fact that we have progressed to the point where we are now having these types of debates, about how we will recover fish in the newly-restored river.

Year of the River: Episode 1 from Andy Maser on Vimeo.

October on the White Salmon: Following quickly on the heels the Elwha River process is the removal of Condit Dam and restoration of the White Salmon River, a tributary of the Columbia River in southwest Washington. On October 26, contractors will blast a hole in the dam‚Äôs concrete base and drain the 92-acre reservoir in just six hours. The torrent will snake 3.3 miles downstream to the Columbia River, taking with it millions of cubic yards of sediment that have settled behind the dam over the past 98 years. While Elwha River restoration is slow-going, a free-flowing White Salmon River will occur literally overnight, though the full removal of the dam is expected to take months, and washing out the load of sediments downstream from the dam site may ultimately take a couple of years. White Salmon Fall Chinook salmon were recently trapped downstream and transported above the dams into habitat they have not visited in nearly a century. They are already making nests and kick-starting the re-colonization process.

Condit Dam Update 1: Buildup to the Blast from Andy Maser on Vimeo.

3. Updates from the blog.

What do wild salmon, failed nuclear plants, and Google have in common?

They all play a role in how the hugely complex Federal Columbia River Power System‚ and the agency that runs it, the Bonneville Power Administration‚ makes and spends money. That was the take-home message from a hearing held yesterday in the House Natural Resources Subcommittee on Water and Power about a controversial bill, the Endangered Species Compliance and Transparency Act, or HR 1719.

Read more from Gilly Lyons over on the blog.

President Obama Greeted in Seattle by a 25-foot Salmon

Last Sunday, September 25th, President Obama visited Washington State on a very brief fundraising trip lasting mere hours that included stops at a private home in Medina and the Paramount Theater in Seattle. Because Presidential visits are rare occurrences in Seattle (his last visit was in 2009), we thought we would use the occasion to send President Obama a special message regarding salmon and jobs in the Northwest.

A new report released today concludes that the facts simply don't support the Bonneville Power Administration's choice of dam energy over wind energy policies this spring - under the rationale of ‚Äúprotecting salmon". Turns out salmon still like water.  Read on. 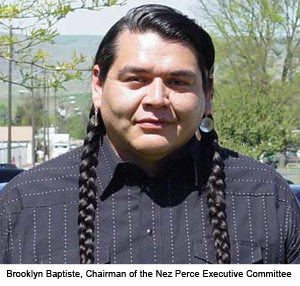 This week, Brooklyn D. Baptiste, Chairman of the Nez Perce Tribal Excecutive Committee wrote a letter to Idaho's Senator Mike Crapo seeking his help to set up solutions-oriented talks among stakeholders in the Columbia-Snake Basin.  Here is an excerpt of their letter:

"In conjunction with the legal discussions that would be necessary between NWF, the State of Oregon, the Tribe and the United States, the Tribe believes there will be value in establishing a stakeholder "solutions table" to explore all scientifically-sound options and to help develop recommendations to the Administration and Congress that could lead to the recovery of imperiled populations of salmon and steelhead while simultaneously providing new opportunities that accommodate and even enhance the social and economic needs of affected communities and of the region at large." As you may recall, the Nez Perce and the State of Oregon have fought alongside salmon and fishing advocates across the country in pushing for a new direction from the President Obama and the federal agencies. If you haven't already, please stand with them and take action here:
Send a message to the Obama administration. Read the letter on Rocky Barker's Idaho Statesman blog or download the letter here.