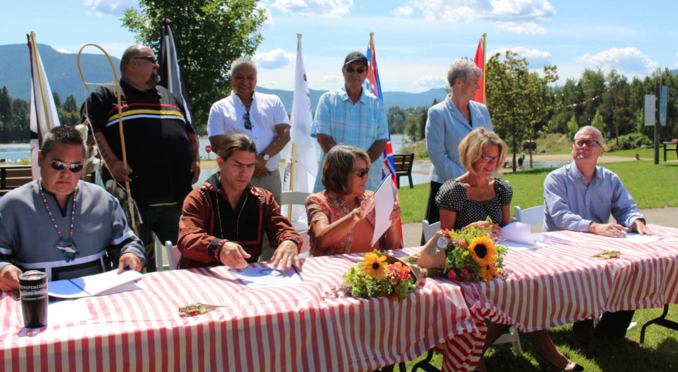 The three-year commitment is being described as ‘historic’

Calling it an “historic” and “unprecedented” day, leaders from three Indigenous groups and the provincial and federal governments have signed an agreement to bring salmon back to the Upper Columbia River.

Representatives from the Syilx Okanagan, Ktunaxa and Secwepemc peoples, British Columbia and Canadian governments signed a letter of agreement in Castlegar on Monday.

“Our fundamental goal is to bring the salmon back to their historic range, the headwaters of Columbia Lake,” said Kathryn Teneese, chair of the Ktunaxa Nation Council. “To be able to enjoy salmon again in our rivers and lakes for food. Thank you again for the representatives of the other governments for joining in this enterprise and committing financial support.”

The three-year commitment between the five governments will see them work together to explore ways to reintroduce salmon to the basin.

A news release said that if successful, the agreement could restore fish stocks to support Indigenous food, social and ceremonial needs and harvest opportunities for all local communities.

The various governments and councils will spend $2.25 million supporting the talks. One-third of the money also comes from the Columbia Basin Trust, whose staff were credited for bringing the disparate parties together to the agreement.

There’s a lot to study and much of the work will be technical in nature. The parties will look at everything from water levels, climate change, to the role of dam operators to provide means for fish to get over their obstructions — various methods have to be explored for their sustainability.

They’ll even study how the reintroduction of salmon could negatively impact the ecosystem.

“We want to study the impacts of reintroducing salmon to the species that are already flourishing in the river,” said Doug Donaldson, the Minister of Forests Lands, Natural Resources Operations and Rural Development for British Columbia. “Some of those species are endangered.

“It’s a massive undertaking, and it’s about time it started, but we have to look at all the different impacts on fish that are already in the system.”

Salmon, once abundant up the entire Columbia River system, have been blocked from their traditional migration routes for 80 years since the introduction of dams to the system downstream in Washington State. The loss of the salmon run devastated Indigenous communities upstream that relied on the fish as a food source and cultural touchstone.

“This was the essence of our culture and life that kept us healthy, not only physically but was the bond of our communities,” said Shuswap Indian Band Chief Barb Cote. “Today we have a duty to make sure the waters are healthy, so when the salmon return they will be able to reproduce and give us the sustenance that is crucial to our future generations.”

Observers to the signing ceremony said it truly was a special accomplishment.

“It’s huge, it’s millennial, this is very, very important,” said Kootenay author Eileen Delehanty Pearkes. “For 77 years there have been no salmon coming up above Grand Coulee Dam from the U.S. to Canada.

“Across the ecosystem, human and non-human, animal, bird, plant, you name it, everyone has suffered in the Upper Columbia from the loss of the salmon.”

“It’s absolutely an historic day,” says Jay Johnson, a negotiator and policy advisor to the Okanagan Nation Alliance. “We’ve been trying to do this in isolation for decades. And we have had success. In the Okanagan tributary, we went from 600 salmon to 500,000 salmon.

“So at a time of global crisis, climate change, and environmental degradation, we now have an international good-news story, bringing salmon back in a sustainable way for food security purposes for generations to come, and we can do that five-fold in the basin here.”

The potential for the recovery of the system is phenomenal. If they succeed in overcoming the hurdles — and the dams — Johnson says up to two-to-three million fish could be coming in and out of the system in the decades to come.

Such a sweeping environmental changes has to be carefully planned.

“That’s why we need the support of all governments to do so,” he says.

Officials said the agreement will be a complement to the current negotiations underway to renew the Columbia River Treaty.

The first meeting of the agreement’s signatories will take place in mid-August.