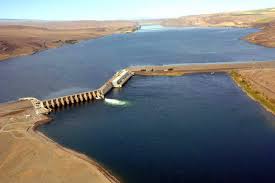 The 2-inch-thick underwater crack at Wanapum Dam, on the Columbia River near Vantage, Wash., extends horizontally across the upstream side of the 65-foot-wide pier called a monolith. It’s one of 12 monoliths on the spillway.

BEVERLY, Wash. – The large crack in part of the Wanapum Dam spillway may have been there long before divers detected and photographed it Feb. 27.

The crack, which measured about 2 inches thick by 65 feet wide when divers first observed it near the base and across the full width of one of the dam’s concrete support piers, had algae growing on the fracture, Dawn Woodward, director of hydro operations for the Ephrata-based utility, told the Wenatchee World’s editorial board last week.

Other parts of the fracture appeared clean, indicating that they may have been more recent.
“We see some evidence that the fracture began some time ago,” Woodward said. “The critical path is to determine the root cause."

The fracture is on the upriver side of the Number 4 concrete pier, also called a “monolith” by public utility district staffers. It’s between spillgates 3 and 4.

The PUD has hired Coeur d’Alene-based contractor Kuney-Goebel JV and subcontractors to do investigative drilling into the damaged pier to map the crack’s size and shape. Drilling began Thursday and is expected to take about nine days. The process includes an underwater camera to capture more images of the crack.

Earlier forensic studies, including ground-penetrating radar and echo imaging, allows experts to see into the structure and bedrock, but have provided no conclusive data about a cause, Woodward said.

No possibilities have been ruled out, Woodward said. She and other PUD officials declined to name suspected causes.

A thorough look at the rest of the spillway turned up no additional damage, other than some minor surface damage on spillways neighboring the No. 4 pier, officials have said.
Investigators don’t yet know if other parts of the dam would also be vulnerable to cracking, Woodward said.

A review of seismic activity in January and February revealed no events that could have caused the damage, but they could expand their analysis to a larger time frame. They’re also looking at the dam’s relation to fault lines in the area, she said.

Water doesn’t appear to be getting under the dam to undermine it at its base, she said.

“We do not believe it is a foundational problem,” she said.

Wanapum Dam is the PUD’s largest power plant, capable of generating 1,092 megawatts of electricity, enough to supply nearly 900,000 Northwest homes. It is near Vantage, just south of where Interstate 90 crosses the Columbia River.

The dam continues to generate electricity but at a reduced rate.