JOSEPH — Allen Pinkham Jr. built a small, dugout canoe in 2018 and launched it in Wallowa Lake.

This year, the greatgreat- great-grandnephew of Chief Joseph is constructing three much larger canoes that may be more than 30-feet long. In fact, they may become part of a flotilla to draw attention to the issues of imperiled salmon and the Lower Snake River dams.

“The canoes are a very important part of our Nez Perce culture, and I want to bring them back,” Pinkham said.

Three huge Ponderosa pine logs, up to 4 feet in diameter and 37 feet long, were donated to the project by JayZee Lumber Co., of Joseph, after they cut them as Forest Service-designated hazard trees. Pinkham and fellow Nimiipuu (Nez Perce) Adam Capetillo are doing the initial work of sculpting the logs into canoes in the JayZee yard.

Pinkham anticipates that more people will work to refine and finish them at the Wallowa Band Nez Perce Homeland Project property (the Tamkaliks grounds) in Wallowa, Pinkham said.

“It’s very generous of JayZee Lumber to donate the logs,” he said.

The idea for a powwow to help fund the canoe work at the Homeland Project grounds occurred to him as he was making plans for canoe work in Wallowa, Pinkham said.

“I thought about bringing maybe two dozen people to the Tamkaliks grounds to finish the canoes,” he said. “Then I thought I could make a mini-social powwow out of this.”

So Pinkham asked Angela Bombaci, executive director of the Homeland Project, if he might organize a small-scale powwow at the Tamkaliks grounds later this fall. No decision has been made.

“It could really help fund the canoe project,” he said.

Pinkham’s powwow would not include the usual dance competitions, but would be a limited gathering focused on the canoes, with perhaps an owl dance and a rabbit dance, which are social dances for couples. It would be organized and run strictly in accord with the Oregon governor’s office and Oregon Health Authority protocols, he said.

“Indians have had some experience with pandemics and disease,” he said. “We want to be very careful.”

Pinkham envisions that his three new dugout canoes will participate in Indian canoe voyages and gatherings that have been appearing on the Snake and Columbia rivers. Those gatherings bring river tribes together, and also draw attention to the issue of the four dams on the Lower Snake River and consequent salmon decline — issues which are very important to Pinkham, he said.

“Having a number of canoes on the river is part of pressing my agenda of salmon recovery and dam removal,” he said. “It would cost $50,000 to $100,000 to keep a couple of canoes and their crews safely on the water. It will start on the water, but it’s probably going to end up in the courthouse.”

He said a major aim is to draw more attention to the salmon issue.

“If more people wanted to join, I could change my little three-canoe flotilla into an armada,” he said. “It’s like the late Rep. John Lewis’ mom said, ‘If you are going to get into trouble, get into good trouble.’” 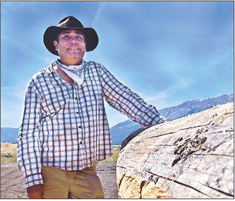 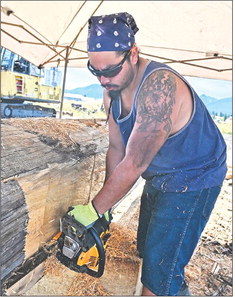