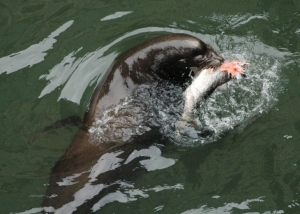 The United States Congress is currently considering legislation that could affect the management of fisheries in the Northwest and directly impact local fishing.

n and steelhead. Another would effectively reverse a recent judge’s decision to increase spill at Columbia River and Snake River dams to improve downstream migration.

There are also two bills that would amend the Magnuson-Stevens act, which regulates ocean fisheries.

H.R. 2083 Sponsored by U.S. Congresswomen Jaime Herrera Beutler, R-Battle Ground, the Endangered Salmon and Fisheries Predation Prevention Act, or H.R. 2083, would amend the Marine Mammal Protection Act of 1972. It would authorize the National Oceanic and Atmospheric Administration (NOAA) to issue one-year permits allowing Washington, Oregon, Idaho, and a broad coalition of tribal entities to kill sea lions in a portion of the Columbia River or certain tributaries in order to protect fish from sea lion predation. Sea lions in the Columbia River and its tributaries consume thousands of salmon and steelhead every year. This bill specifically targets those marine mammals that set up at “pinch points” where the salmon funnel through tight areas, such as fish ladders. Heath Heikkila of the Coastal Conservation Association thinks the marine mammal problems need to be addressed, and soon. “We badly need a solution to the predation by sea lions,” he said. “They have tried hazing and moving the animals, but it hasn’t worked.”

Herrera Beutler proposed the legislation after hearing the concerns and frustrations of many of her constituents. She said that she understands the importance of salmon to our region and worries about the damage sea lions can cause. “There is a 90-percent chance of Willamette steelhead going extinct (because of sea lions)” she said. “Forty-five percent of our spring Chinook disappear between the mouth of the Columbia and Bonneville Dam.” She is aware that critics of the bill denounce the killing of sea lions. “This is not an anti-sea lion bill,” Herrera Beutler said. “It’s a balanced approach that protects our salmon. It has the support of fish
and wildlife managers, as well as the tribes, and the governors of Washington, Oregon, and Idaho.” The bill currently is awaiting a floor vote in the house, and its future in the Senate is as yet unknown. However, Herrera Beutler is hopeful. “This is the best chance we have had yet,” she said. “But it’s not a sure thing.”

H.R. 3144 H.R. 3144 is to “provide for operations of the Federal Columbia River Power System pursuant to a certain operation plan for a specified period of time, and for other purposes.” This bill, sponsored by U.S. Congresswomen Cathy McMorris Rodgers, R- Spokane, would effectively reverse the recent decision by U.S. District Judge Michael Simon that ordered more springtime spill over dams along the Columbia and Snake Rivers. H.R. 3144 would order the Army Corps of Engineers and the Bonneville Power Administration to adhere to the 2014 Obama-era plan for operation of the dams, which pre-dates the judge’s order.
Advocates say spill allows juvenile salmon to safely pass over dams, rather than sending them through the structures, which kill a percentage of the juvenile salmon as they head to sea. Spilling water instead of running it through the generators reduces the money earned from the dams. Also, some advocates of the bill say dissolved gasses caused by spill pose a risk to juvenile fish. Congresswoman Herrera Buetler supports the bill. She said the 2014 salmon plan is a “comprehensive plan”

that was designed by scientists of federal agencies during the Obama Administration. She said the legislation is not about blocking spill. “It’s not an issue of whether or not to spill, it’s about the best way to do it,” she said. “This is about how to mitigate the effects of the dams in the best possible way.” “We don’t want to breach the dams and wreck the economy,” she adds.

Liz Hamilton, the executive director of the Northwest Sportfishing Industry Association minces no words when she condemns this bill. “This bill stinks,” said Hamilton. “The judges decision allows spill up to the gas cap, and it is the number one thing they can do to restore salmon populations” The gas cap is the limit on dissolved gasses in the river. Hamilton and the NSIA have been actively involved in the legal wrangling over operation of hydro dams in t

he Columbia Basin. The dams are already ordered to spill during the summer months when fall salmon are migrating out to sea, but the new ruling means the power agencies will now have to spill water in the spring as well. Spill has been widely lauded for increasing returning adult fall salmon in the Columbia River. Long-time fishing guide Jack Glass of Team Hook-Up Guide Service has fished the Columbia and its t

ributaries for decades. He is pleased with the results of the summer time spill. “I’m very much in favor of the spill, and we need to maintain that,” he said. “Given the poor ocean conditions we had, if we had not had that spill we would not have any fish coming back this fall at all.” The bill has passed the House and awaits action by the Senate. H.R. 2023, H.R. 200 These two bills are designed to amend the Magnuson-Stevens Act, which was passed in 1976, and reauthorized as recently as 2006. The act provides a structure for ocean fisheries but was designed for commercial fishing. The new bills give state managers more flexibility when setting recreational ocean fishing seasons. Sport anglers have often criticized the act because its structure does not lend itself well to recreational anglers. The bills also allow for a number of exemptions that foes say can be used by state fishery managers to get around annual catch limits set by federal fish managers for ocean fish stocks.
These bills get mixed reviews from sport anglers. Most believe the Magnuson-Stevens act needs to be revised to reflect the rise in
popularity of recreational ocean angling, but many are not happy with the provisions concerning annual catch limits. Bob Rees, an Oregon fishing guide and director of the Northwest Steelheaders, worries about possible reductions in ocean fish stocks if the bill becomes law. “It is a Gulf Coast initiative, bit it is changing federal law,” he warns. “Many of our ocean species could be affected, including
groundfish.” The Magnuson-Stevens act is credited with recovering 40 overfished populations since 2000, including populations of lingcod along the West Coast
.