Tri-City Herald: ‘Who are we without salmon?’ Tribes gather along dammed Snake River to call for action 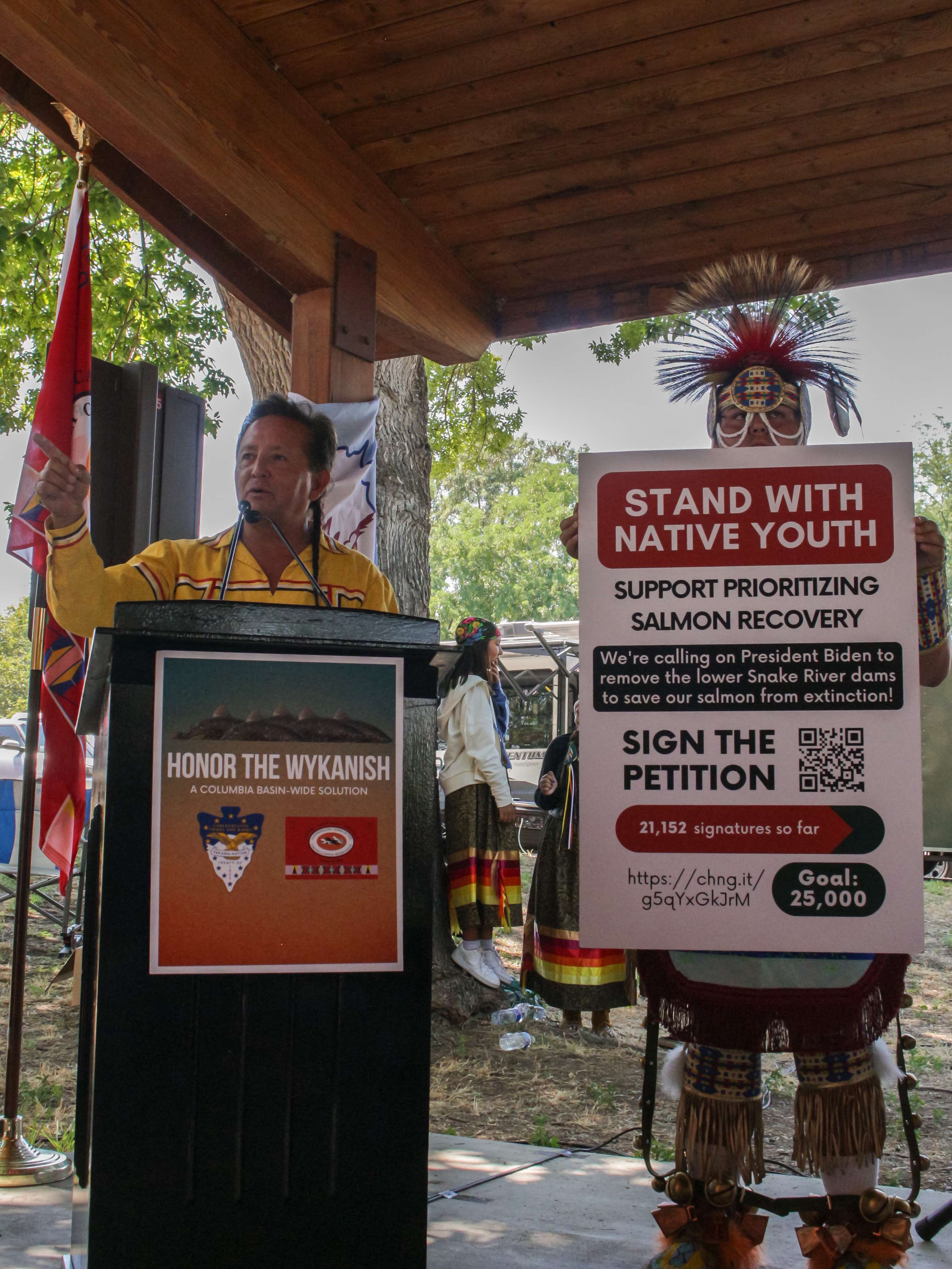 Tribal leaders gathered at the Snake River to celebrate the role of salmon in the Northwest on Tuesday and advocate for the future of endangered fish. The Yakama Nation and the Confederated Tribes of the Umatilla Indian Reservation called for immediate action on a comprehensive strategy to ensure that endangered salmon do not become extinct.

The strategy must include breaching the four lower Snake River dams in Eastern Washington to avoid extinction of endangered salmon and bring populations back to harvestable levels, said a message from the chiefs of the Jamestown S’Klallam and the Suquamish tribes read at the gathering at Fishhook Park downriver from Prescott.

“It’s not only achievable, but affordable compared to what we’ve paid on previous failed efforts to help the fish,” the two chiefs said.

The solution should also take into consideration farmers and the energy needs of families across the region, they said.

The dams, from Ice Harbor Dam near the Tri-Cities upriver to Lower Granite Dam near Lewiston, Idaho, allow barging of wheat and other agriculture products and produce low-cost electricity.

The tribes regularly work with non-Native communities to find collaborative solutions to challenges in the Northwest, and they can do it again to save the salmon, said speakers at the celebration.

“Salmon are sacred to us. Stand with our tribes. Save our salmon,” said Yakama Nation Councilmember Jeremy Takala. “Through collaboration and community we can protect our guaranteed treaty rights.”

It is the obligation of the Native American community to ensure salmon swim the Snake River for generations to come, said Corinne Sams, board member for the Confederated Tribes of the Umatilla Indian Reservation.

“The reality is, our salmon are deteriorating and for far too long our salmon and treaty rights have been threatened,” she said. “This is unacceptable. Who are we without salmon?”

Salmon are not the only reason for breaching the dams, according to the Yakama, Nez Perce, Umatilla and Warm Springs tribes.

“These federal dams have been built and operated on our tribes’ homelands, waters and fisheries,” they said in an ad in the Tri-City Herald Tuesday morning.

“They flooded our sacred places, including our ancestors’ gravesites,” said the ad. “This is not a ‘past’ injustice. It is occurring today and every day.”

A draft study commissioned by Gov. Jay Inslee and Washington U.S. Sen. Patty Murray, both Democrats, that was released in June, points the way toward dam breaching, they said.

The draft study concluded that it would be costly — perhaps requiring more than $27 billion — but the dams could be breached and their benefits replaced.

It would be the action most likely to restore endangered salmon runs and benefit tribes, the draft study said.

The draft study was condemned by supporters keeping the four dams, who said other factors, such as ocean conditions and predators, affect salmon populations and that Snake River salmon returns are in line with returns at undammed rivers in the Northwest.