Make sure to check out the video of Governor Inslee's Response here. 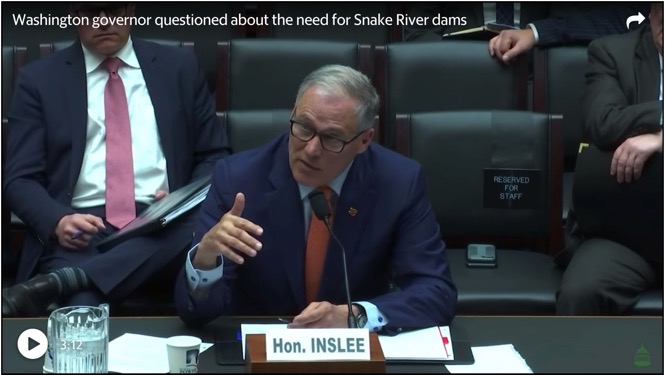 Washington Gov. Jay Inslee is being urged to veto spending $750,000 for a state study on breaching the four lower Snake River hydropower dams.

He is scheduled to sign the $52.4 billion operating budget bill for the next two years on Tuesday.

It includes $375,000 in the next fiscal year and $375,000 for fiscal 2021 to look at the issues associated with the possible breaching or removal of the lower Snake River dams to help salmon and the orca off the Pacific Coast.

The proposal has had strong opposition in Eastern Washington, particularly from electric utilities, ports and organizations representing agriculture and economic development.

Washington governor questioned about the need for Snake River dams

“Instead of studying the removal of our federal dams, these state dollars could have been used to fund salmon recovery programs that directly aid endangered salmon species,” they said in a statement.

The four lower Snake River dams from Ice Harbor near Burbank upriver to Lower Granite provide essential benefits to the Pacific Northwest way of life, from powering nearly 2 million homes with low cost and renewable electricity to shipping farm and other goods, they said.

Their call on Monday for a veto echoed their statement when the proposed state budget was released in late 2018.

Earlier this month a group of 31 agencies also asked Inslee to remove the $750,000 for the study from the operating budget.

“The issue remains profoundly controversial and divisive,” the letter said.

They pointed out that a comprehensive study already is underway, as ordered by a federal judge, to consider the impacts of removing the dams.

A federal decision on operating the Columbia River Power System, which includes the lower Snake Dam, is planned for September 2020.

“Extreme measures such as dam breaching have been studied and rejected many times over the years,” the letter said. “Instead of pursuing this divisive path, we need to renew our investments in fish passage, habitat and other river improvements.”

Earlier in the year, the Tri-City Development Council led a local effort, joined by ports, chambers of commerce, cities, counties, PUDs and others, to urge state legislators not to spend money on the study as they considered the proposed budget.

“It is safe to say that all Washingtonians care about the health and future of the unique and iconic southern resident whale population,” said the letter signed by TRIDEC and others. “No one disagrees that this group of orcas is in trouble.”

But the state study would not be as comprehensive as the federal effort and would not produce a document that decision-makers would rely on or that would be used to inform science-based species recovery activities, the letter said.

“Simply put, this study would not be the best use of limited taxpayer resources,” the TRIDEC letter said.

Groups that have long sought to remove the lower Snake River dams are using the orcas to play on the public’s sympathies to promote their goal of dam removal, the letter said.

The National Oceanic and Atmospheric Administration Fisheries has concluded that one narrow approach to fish recovery, such as breaching dams on the Snake River, will not have a measurable improvement on orca survival, it said.

The local groups also have pointed out that the four lower Snake River dams provide a significant contribution to transmission grid reliability. They balance electric generation and demand on the grid and help support intermittent wind energy.

Inslee is schedule to sign the operating budget and other bills at 9:30 a.m.