Tri-City Herald: Up to 300 gallons of oil may have spilled into the Snake River from a leaking dam turbine 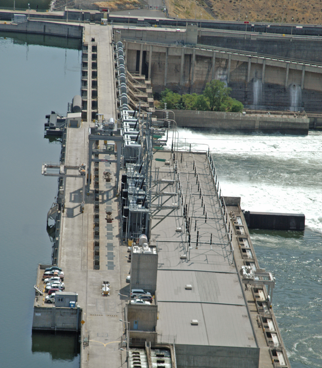 Up to 300 gallons of oil may have leaked into the Snake River from a power-generating turbine at Lower Monumental Dam.

The Army Corps of Engineers reported the suspected spill this week, but it’s unclear when it possibly happened.

The Army Corps disclosed the incident to regulators and the environmental group Columbia Riverkeeper under the terms of a 2014 settlement agreement.

Columbia Riverkeeper had sued to stop oil releases from the eight dams on the lower Snake and Columbia rivers.

The group issued a statement Thursday calling the most recent disclosure the latest in a series of spills that highlight the threat posed by the four aging Snake River dams.

The Corps reported that 200 to 300 gallons of unspecified “turbine oil” may have leaked from a turbine shaft at Lower Monumental, about 40 miles northeast of the Tri-Cities.

No Sheen Reported on Rivers

The Washington Department of Ecology confirmed it was also notified of the potential spill, which will be confirmed once the Army Corps takes an inventory of oil in the turbine.

A state spokesman said the agency has received no reports of a sheen appearing on the river.

The Columbia Riverkeeper issued a statement about its continuing concerns about the dams.

“Oil pollution from Lower Monumental Dam is just one more reason to remove the four obsolete, aging dams on the lower Snake River,” Miles Johnson, senior attorney for the riverkeeper group, said in a news release.

A series of 2017 spills released more than 1,600 gallons of oil into the Snake River at Lower Monumental.

According to Monday’s disclosure of the latest spill, the Army Corps can’t say if or when oil was released. Missing oil may have leaked through failed seals associated with the dam’s second turbine unit.

It deployed oil absorbents and other steps to collect residual oil.

The unit remains out of service pending an investigation. The investigation includes taking an inventory of oil used to lubricate the turbine to determine what is missing.

The Corps released a statement that it is working to improve its record on oil spills, including the potential of using nontoxic lubricants.

“We’ve improved our oil accountability program over time and while our systems aren’t perfect, the lessons learned have greatly improved our overall ability to track and contain oil,” it said. “We’ll continue refining these procedures because our goal is not to spill any oil.”

A spokesman said that other turbines in the Columbia-Snake system will compensate for the loss of power from Unit 2.

Each of the six units at the dam is able to produce up to 135 megawatts.

Lower Monumental Lock and Dam near Kahlotus was built in 1961 and provides power, navigation locks, fish ladders and irrigation.