Brett VandenHuevel and Julian Matthews
May 2020 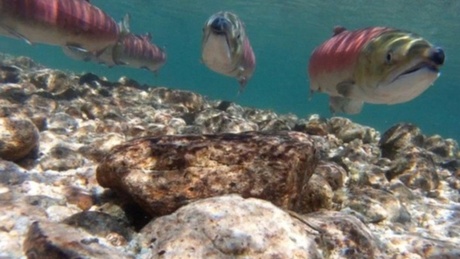 If you had other things on your mind last month, that’s more than understandable. Also, you didn’t miss much: the EIS is just another federal study aimed at propping up the status quo—while Northwest salmon and fisheries slide toward oblivion, and cheap solar and wind make Bonneville Power Administration’s hydropower less and less competitive.

We believe that Northwest-elected leaders should develop a solution that saves salmon by removing the Lower Snake River dams and reinvests in agriculture, transportation and river communities.

Effective leaders will make this happen—not a bloated government study short on solutions.

The EIS is so inadequate, in fact, that it appears to have cemented the belief among Northwest leaders that the federal agencies are not capable of providing solutions.

She calls for Lower Snake River dam removal and “propos(es) a path forward that can lead the region to an achievable and workable solution for future operation of the Columbia System, one that protects salmon and steelhead while assuring sustained economic growth for the region.” Washington Gov. Jay Inslee’s response is less robust, but strikes a similar chord.

Keeping Lower Snake River dam removal on the table, Gov. Inslee explained that he is “heartened by recent calls for, and steps toward, a regional collaboration about how to do more for salmon in a manner consistent with the energy, transportation, and irrigation … ”

We agree the Northwest needs a new path forward.

Despite past rhetoric on both sides, this issue is more complex than removing four dams on the Lower Snake to save salmon and orcas.

The system of dams on the Snake and Columbia rivers touches many aspects of life in the Northwest, from agriculture to electricity to fisheries. The hydrosystem was imagined nearly 100 years ago and largely constructed during the middle of the last century.

We are not trying to destroy that system; we are trying to improve it. For everyone.

In truth, the system is not working for many people.

Snake River salmon and steelhead runs are collapsing; tribal, commercial and sport fisheries are being decimated; and electrical utilities are wondering if they can keep paying for BPA’s costly hydropower.

As these problems intensify, they threaten the reliability of the remaining benefits of the Lower Snake River dams, namely transportation and agriculture.

Instead of continuing to fight each other, people and interests throughout the Northwest should come together and decide on a new path forward. Otherwise, the fate of our region, its resources, and its cultures will be decided by default, litigation, or chance.

Those labels are too simplistic and don’t track reality.

And many “east-side” tribes and fishing guides want dam removal, while some “west-side” electrical utilities would rather keep the dams in place. On this issue, east-west divisions are an illusion. In the Northwest, we are all part of the same watershed, transportation system, electrical grid and ecosystem.

We are all in this together. We need to find solutions that work pretty well for everyone.

Farmers in Eastern Washington need water for crops and reliable ways to get those crops to market.

Removing the four Lower Snake dams would not reduce the amount of irrigation water. And farmers who improve their irrigation intakes to accommodate changing water levels should not have to foot the bill.

Also, some wheat growers still ship their product on barges down the Lower Snake.

Dam removal would make this impossible, but dam removal advocates are also pushing for much-needed investments in rail and other transportation infrastructure. This is not about leaving people, especially farmers, behind.

It’s time to envision the Northwest in 20, 50 or 100 years. We all want our children to be able to catch and eat salmon. We all want them to inherit modern transportation infrastructure and a truly clean, cheap, and reliable energy system. It’s time to come together around common causes.

The federal agencies that run the Lower Snake River dams are clearly not interested in changing the status quo, even though it’s not working for many people in the Northwest.

Despite—and perhaps even because of —the EIS’ shortcomings, conversations are happening across the Northwest that might lead to real progress.

It won’t be easy or simple. The ecosystem and the economy of the Northwest are deeply entwined with the Columbia and Snake rivers. The regional politics also are complex, and the issues don’t fit neatly into westside-vs-eastside or red-vs-blue narratives.

But we must succeed. The future of salmon, sustainable fisheries, affordable power and agriculture in the Northwest all depend on our ability to come together and solve these challenges before it’s too late.

Brett VandenHuevel is the executive director of Columbia Riverkeeper, and Julian Matthews is a board member of Nimiipuu Protecting the Environment.