Idaho Statesman: 'This will be a big deal for people who fish for trout' 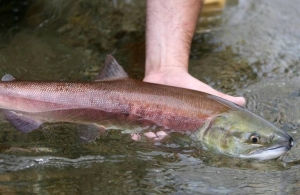 Salmon and trout anglers across the Pacific Northwest are going to have fewer places to fish over the next 40 years, concludes a new study published this month.

Scientists at the Forest Service's Rocky Mountain Research Station in Boise found that in the summer and early fall, rivers in the Pacific Northwest have already warmed 1.8 degrees Fahrenheit since 1976. That's the same rise measured at the Bonneville Dam over the last 80 years and used in models by climate scientists.

The researchers studied 391 monitoring sites. The temperature pattern gives them confidence the warming trend is going to continue for the next 40 years, said Dan Isaak, the lead researcher. That means salmon and trout are going to have less habitat, and will be replaced by warm-water fish like smallmouth bass.

"This will be a big deal for people who fish for trout," said Isaak. "It might be that places their grandfather and father took them, there might not be trout anymore."

The good news is that the warming isn't happening as fast as scientists previously thought. That gives both the fish and managers time to adapt. But adjusting will be harder for some species than others...