The Stranger: Giving up Chinook Is a Nice Idea but It Will Not Save the Orcas 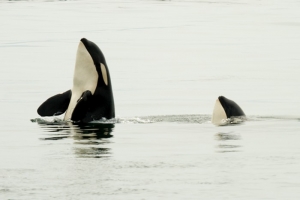 The Seattle Times published a heart-warming/heart-breaking story Wednesday about chef Renee Erickson, who recently announced that she will be yanking Chinook salmon from her restaurant menus in response to Tahlequah, aka J35, the Salish Sea orca who became an international cause célèbre after carrying her dead baby for 17 days.

“It’s sad," Erickson told the Times. "I love eating [chinook], and I grew up catching it." But, she added, “The biggest gut wrench is that we have starving orcas. We are eating the salmon they need to eat.”

The Salish Sea's resident orca population has declined from 98 in 1995 to just 76 today members today, in large part because of chinook shortages. Taking chinook off restaurant menus (and your own shopping list) is a commendable action. But, unfortunately, it won't save the whales. It's kind of like every other environmental crisis: You can stop driving your car/running your AC/using straws/etc, but actually solving climate change and cleaning up the oceans will take a hell of a lot more than individual do-gooding.

Instead, we need big changes, and that means repairing and restoring watersheds and rivers like the lower Salmon in the Columbia Basin. "The Columbia Basin is a historic source of big, fatty chinook for orca," says Joseph Bogaard, the executive director of Save Our Salmon, a coalition of conservationists and fishers. "The basin is large, with low population density and with large remaining areas of high quality, protected habitat. In certain key areas, habitat restoration isn’t needed so much as restoring connectivity this habitat."

And the way to restore connectivity to this habitat is to tear down the dams that prevent salmon from reaching the Pacific. There are, however, some powerful entities working against that. Federal agencies like the Bonneville Power Administration and the Army Corps of Engineers—not to mention utilities—have "led the charge to protect status quo dam operations in the Columbia Basin for decades," Bogaard says. "This pattern must change. The steep losses of chinook salmon in the Columbia/Snake Basin primarily caused by the federal dams are a major reason why orcas are teetering on the brink of extinction."

Those in favor of maintaining dams argue that the region's ample hydroelectric resources are a big part of why the Pacific Northwest has some of the best air quality on the continent (current smoke storm notwithstanding). And that is undoubtedly true. So will removing dams on the lower Snake mean dirty air, service interruptions, higher power bills, and greater reliance on fossil fuels, as some conservatives and special interest groups have argued?

Well, no, actually. According to a study conducted by the NW Energy Coalition, increasing efficiency and renewable energy sources like solar and wind will make up for energy lost by tearing down dams on the Lower Snake—and at an estimated cost of just one extra dollar a month for consumers. As NW Energy Coalition's Nancy Hirsh wrote in the Tri-City Herald, "The power replacement study—the most extensive yet undertaken on the subject—shows that power from the four lower Snake River dams can be affordably replaced by a mix of energy efficiency measures and renewable energy resources without any loss of electric-system reliability and with little or no increase in greenhouse gas emissions. In fact, electric system adequacy, reliability and flexibility would actually improve. These findings put to rest the decades-old myth that we have to choose between clean, affordable, and reliable energy on the one hand, and the recovery of salmon populations on the other."

Now, it's possible we'll someday have the political will to remove dams on the lower Snake River—in March, Gov. Inslee convened an orca recovery task force that will supposedly explore all options, including dam removal—but tearing down dams and restoring the ecosystem will take several years to achieve. In the meantime, Bogaard says, "A highly effective near-term measure to rebuild chinook populations in what was once the planet’s most productive salmon landscape is to increase ‘spill’ at the federal dams on the lower Snake and Columbia Rivers. Spill sends water (and out-migrating juvenile salmon) over the tops of dams. They arrive at the Pacific Ocean more quickly and safely and survive at a much higher rate than fish that are barged or go through turbines." The Bonneville Power Administration and utilities, however, don't want to do this, because increasing spill (and tearing down dams) costs them money.

In the meantime, forgoing chinook may be all most of us can do. But if the chinook—and the orcas who depend on them—are ever going to recover, it's going to take a lot more than choosing something else for dinner.