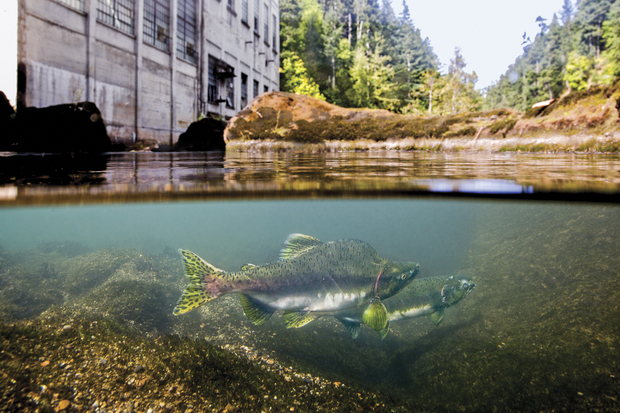 The Columbia and Snake rivers have been providing sustenance throughout the northwest since man first inhabited the region – first directly via the salmon that swim through their waters, then through irrigation and power generated by those waters.

Over the generations, the methods used to harness the power of those mighty rivers have taken their toll. When combined with the larger-scale plight of the planet, the cumulative effect is deadly to the original harvest and throughout the food chain.

While government agencies and conservation groups wrestle with how best to protect the native salmon that live and spawn in the waters of the Columbia and Snake, the bottom line is that due directly to human-generated factors, those waters themselves are becoming incapable of sustaining their inhabitants.

Last week, the National Marine Fisheries Service approved an application allowing the Washington Department of Fish and Wildlife and partners to expand a program to lethally remove sea lions preying on threatened and endangered salmon and steelhead in the Columbia River basin.

But sea lions aren’t the greatest enemy of salmon – science and research has determined that to be climate change and hydroelectric dams.

Robb Krehbiel, northwest representative of the Defenders of Wildlife, described the problem.

“The EPA recently did an analysis of the Snake and Columbia river dams, because the state of Washington has told the federal government ‘Hey these dams are in violation of our Clean Water Act standards,’ which says that you have to keep your water below 68 degrees in salmon-bearing rivers. So the EPA did analysis to try to figure out where (the temperature rise) is coming from and they concluded that the majority of that heat is created because of the presence of those dams.”

Despite acknowledging the science, federal agencies have defended keeping dams on the lower Snake River.

On July 31, federal agencies, including the U.S. Army Corps of Engineers, released their final environmental impact statement for 14 federal dams in the Columbia River basin, which decided that the dams should stand.

Most environmentalists, and even the Corps as far back as the 2002 EIS, have acknowledged that removing these dams are the best chance to save endangered salmon, along with the Southern Resident killer whales in the Puget Sound that rely on them for food.

“The federal failure to remove the dams despite clear supporting science is a disaster for our endangered salmon and orcas,” said Sophia Ressler, Washington wildlife advocate at the Center for Biological Diversity. “Dam removal is the only solution that protects these iconic animals. By neglecting this option, these agencies have let down our region and our wildlife.”

“We could kill a lot of seals and not get a ton of salmon back and we’re probably going to make a lot of people upset in the process.”

“People need to think critically about this issue and question what they are hearing from pro-dam supporters,” said Jim Waddell, U.S. Army Corps of Engineers (retired) and founder of the nonprofit Dam Sense, in a statement. “The EIS is certainly not the final word. The Corps can still respond to political and public pressure by placing the dams in non-operational status and starting to breach them this year.”

According to reports, currently only 72 Southern Resident orcas remain. These orcas, which are based in the Puget Sound but migrate along the West Coast, are starving to death as their primary food source, chinook salmon, continue to face significant declines in the region.

As the region continues to suffer the hottest temperatures of the summer, salmon in the Snake and Columbia rivers are likely to be severely impacted.

Most people think of the dams as impediments to recreational fishing, or impediments to salmon being able to navigate the rivers to spawning grounds – both accurate statements.

But Krehbiel says those issues aren’t the main problem.

“I think that is one of the biggest issues with the dams, especially on the lower Snake River but also on the Lower Columbia River – fish passage is sure still an issue for both adults and juveniles, and that’s what a lot of people think about when they think about these dams and the impact that they have to the fish. But really one of the more concerning issues is the temperature that they are creating.”

Dams create stagnant pools that allow the sun to heat the water to lethal levels, literally cooking the fish alive. Water above 68 degrees is bad for salmon and steelhead – it makes them more susceptible to disease and predation. As water gets hotter, salmon start to die off.

As the daytime highs across the state linger in the upper 80s and 90s, the water temperature rises with them.

“Every single reservoir behind the four lower Snake and four lower Columbia dams are all over 68 degrees,” said Krehbiel. “So it’s a big concern that the water has been this hot for so long in both of these rivers, and with climate change it’s only going to get worse.”

Current temperature projections list August as the second-hottest month of the year in Washington so far.

Computer and climate models from the EPA and independent researchers have shown that the four lower Snake River dams are a major cause of this hot water and removing them would keep water temperatures on the lower Snake and lower Columbia well below the 68-degree threshold. To survive, salmon need access to the climate-resilient spawning habitat found in the Northwest.

Krehbiel acknowledges that it’s a multilayered problem. But he also thinks there’s reason for hope.

“For a long time, folks were kind of hesitant to talk about the Snake River dams because they do provide a lot of services to people, and taking them down would require a lot of investments to be made to offset those services.”

Some of those investments, suggested Krehbiel, would be to extend rail infrastructure throughout the state, modernize and extend irrigation systems and invest in renewable energy sources to supplement and eventually replace the carbon-free electricity produced by the dams.

“I don’t think that these are all things that are out of the question,” he said. “It just takes a lot of work and it takes a lot of people coming together to have those difficult conversations.

“We really need our elected officials to weigh in and sort of bring folks together to create that sort of holistic solution.”

Krehbiel was encouraged by statements made by lawmakers following the EIS, stating that Govs. Jay Inslee, Kate Brown and Brad Little all recognize the issues and the need to find appropriate solutions.

“There’s a lot of conversations happening, there’s a lot of new moral leadership emerging amongst our elected officials,” Krehbiel said. “I just hope that we collectively act with the sense of urgency that’s needed, given how dire the situation is for salmon on the river and our Southern Resident orcas, who are highly endangered and starving to death.”

It’s also important to remember that the lack of salmon is significantly impacting Native American tribes throughout the Columbia Basin.

“Virtually every single tribe that commented on this process said that removing the four lower Snake River dams was what they wanted to see happen,” Krehbiel said.

The impact salmon have on tribal culture, religion and ceremony is far-reaching. It’s also a food justice and food security issue.

So while some folks consider salmon a recreation opportunity or a choice for dinner, for others throughout the Pacific Northwest ecosystem it’s the identity of the region.

“It’s so much more than just the fish and I hope that more people see that and recognize that because salmon are just an amazing animal,” Krehbiel said.

“It would just be devastating if this generation or the next generation is the one that lets them go extinct.”