The Seattle Times: Skinny orcas are up to 3 times more likely to die than healthy whales, new research shows 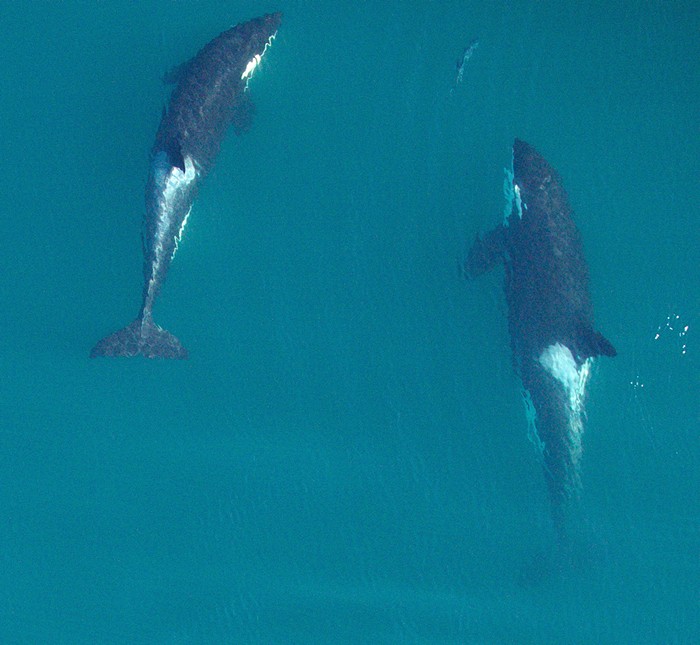 Skinny southern resident killer whales are two to three times more likely to die in the next year than whales in a healthy condition, new research shows.

In a paper titled, “Survival of the Fattest,” scientists used drone images taken between 2008 and 2019 of the J, K and L pods of endangered southern resident killer whales to explore the link between food and survival.

They found a clear connection: poor body condition in living whales is a good predictor of dead ones.

That was not expected because L pod is rarely seen in Puget Sound. But L pod orcas clearly have learned to target fish homing to Puget Sound rivers while those adult Chinook are shimmering out at sea.

The paper vindicated the work of scientists who have been pioneering drone imagery as a noninvasive method to gather body-condition data, said John Durban, senior scientist with Southhall Environmental Associates.

The research definitively shows that imaging can detect relatively subtle conditions in body condition and link that directly to increased chance of mortality. “It’s an early warning system,” Durban said. “If we see early on we have large numbers of animals in poor condition, hopefully that could trigger a management response.

The team did not draw any conclusions about K pod and river systems from this round of data.

The data also shows the orcas can’t be considered as one entity, Durban said; the J, K and L pods have their particular foraging patterns, and they change. Like any skilled fisherman, the southern residents know where, and when, the fishing is good — cultural knowledge passed on generation to generation and season to season.

The southern residents have long used the San Juan Islands as a primary summer foraging ground, but in recent years poor Fraser River runs have changed that. The orcas have barely been in the islands this summer.

For the southern residents, both salmon abundance and access to hunt them matter.

Orcas use sound to hunt and especially when fish are scarce, providing quieter water could be a near-term quick assist. Area closures to fishing and other uses could help the whales forage without disturbance by vessels and boats.

The data also could help managers change fishing regulations to respond if the orcas are in urgent need.

“The new research findings may also help fisheries managers find ways to increase the availability and accessibility of Chinook salmon,” said Lynne Barre, director of killer whale recovery for the National Oceanic and Atmospheric Administration, or NOAA. “The goal is to increase availability in places and at times of the year when the whales most need them, while still providing fishing opportunity.” She said the research provides “a level of detail we did not have before.”

That takes improvement in salmon habitat, from the rivers where salmon spawn and rear to the estuaries and the ocean where they put on nearly all of their body size and weight. Water temperature increases in the sea surface and in the rivers to which salmon return are threatening their survival. For some highly imperiled salmon, such as spring summer Chinook in the Snake River, scientists say urgent action is needed across all life stages to prevent extinction.

NOAA, in cooperation with states and tribes, also is increasing hatchery production by tens of millions of fish in what may be the world’s largest-ever attempted wildlife feeding effort. How many of those young fish ever return as adults and wind up as live orca chow is yet to be seen.

But with only 74 southern resident orcas left, knowledge is power to make a difference, said Joshua Stewart, lead author on the paper and a postdoctoral researcher at NOAA’s Southwest Fisheries Science Center.