Salmon in Oregon’s John Day River encounter adverse conditions caused by both nature and man; but they don’t have to traverse as many dams, and that seems to be a crucial benefit 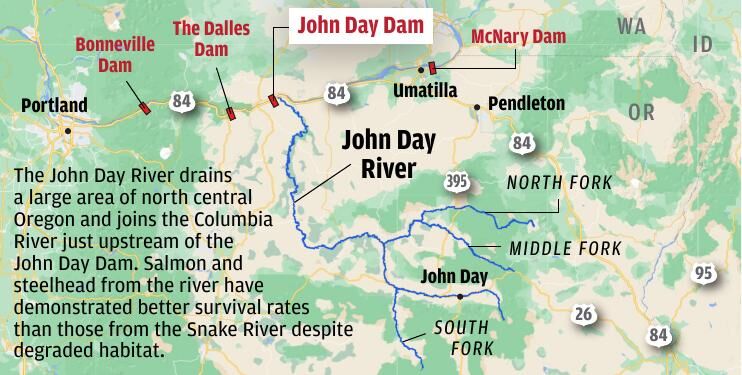 “It’s loose,” he says of the mound of gravel in the upper reaches of the Middle Fork of the John Day River.

That squishiness is a sign of recent spawning activity. In September, an adult female chinook used her body to excavate a depression for her eggs and then carefully piled gravel over them. The eggs will mature into juvenile fish sometime between March and May.

“The strategy they have evolved is to spawn in the fall so the fry emerge first thing in the spring and maximize the productivity benefit in spring when growth conditions are good,” said Tattam, a fisheries biologist for the Oregon Department of Fish and Wildlife at La Grande.

But that strategy comes with risk. Adult fish that return to the river in the spring when water is high and cold must survive over the summer when they are vulnerable to low flows and high temperatures. The emerging fry will face the same perils and others, like an abundant predator population, during the year or more they spend in freshwater. Intense heat waves like the one that struck in June can take their toll on both adult and juvenile fish.

It’s an evolutionary gamble made by spring chinook throughout the Columbia Basin and Pacific Northwest — one that will become more risky with climate change.

A good and bad example 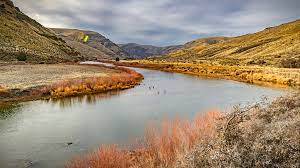 The John Day starts in the Elkhorn, Strawberry and Blue mountains of northeastern Oregon and flows about 300 miles west and north across a sparsely populated region to join the middle stretch of the Columbia River. Despite the relative lack of development, humans have had a significant impact on the river, which has been degraded by mining, logging, grazing and irrigation withdrawals. In many places, the river has been disconnected from its floodplain. Its lower sections are hot and low in the summer. Some stretches have been hemmed in by dredge mining and riparian alteration.

“None of the habitat would strike you as being what you would consider excellent chinook habitat,” said Jim Ruzycki, fish program manager for the Oregon Department of Fish and Wildlife.

Efforts are underway to repair some of that damage. The Confederated Tribes of the Warm Springs Reservation have conducted extensive habitat improvement work on the river’s Middle Fork, some of it on the same ground covered by Tattam and his crew during spawning surveys in September.

But its lack of high-quality habitat makes the relative success of wild spring chinook in the John Day River remarkable.

“It’s kind of counterintuitive. You wouldn’t expect that John Day fish would return at a rate three to five times higher than Snake River fish, but they do,” said Adam Storch, a scientist with the Oregon Department of Fish and Wildlife.

Storch is one of several scientists who has worked on a long-running study comparing salmon and steelhead returns in the John Day and Snake rivers. The work shows John Day fish, despite the degraded habitat, routinely outperform fish from the Snake River Basin in one key survival metric — smolt-to-adult ratio. The metric tracks the percentage of juvenile salmon and steelhead that survive their migration through freshwater to the ocean and ultimately return as adults. The survival disparity between the two tributaries of the Columbia River is one of the key arguments made by scientists and fish advocates for breaching the four lower Snake River dams.

Fisheries scientists and policymakers say for a run to be stable, it needs to achieve a smolt-to-adult return rate of at least 2 percent. A rate of 4 percent is necessary for a run to grow.

The long-term rate for wild Snake River spring chinook, as measured at Lower Granite Dam, is less than 1 percent, and for wild steelhead, it’s about 1.7 percent. On the John Day River, the rate is more than 4 percent for chinook and above 5 percent for steelhead. The John Day River doesn’t have any hatcheries, so all of the fish, with the exception of strays, are wild.

It’s the kind of survival fisheries managers on the Snake River, with its abundance of high-quality habitat in the mountains of central Idaho and northwestern Oregon, dream of.

What explains the disparity in smolt-to-adult survival? Why would the river with habitat that is in much poorer condition and more vulnerable to climate change be home to fish runs that are doing better?

The scientists conducting the study say dams are the most likely explanation. The John Day River is free-flowing. Fish that return there must negotiate just three dams on the Columbia River — Bonneville, The Dalles and John Day. Fish that return to the Snake River must pass eight dams — four on the Columbia and four on the lower Snake. Dams slow the speed of the river and lengthen the time it takes for juvenile fish to reach the ocean. That makes them more vulnerable to predators and getting lost in slackwater reservoirs.

The fish are also exposed to stress and injury when passing the dams. Studies show the fewer times smolts pass through hydroelectric turbines at the dams or the system of screens and pipes designed to protect them from that fate, the better they survive to return as adults.

“You start running out of culprits,” said Art Martin, a fisheries scientist with the Oregon Department of Fish and Wildlife. “The fact that those Snake River fish have to traverse more dams as juveniles and adults is a likely factor in this increased mortality in the Snake River fish compared to the John Day fish.”

Breaching the four dams has long been discussed as a way to save Snake River salmon and steelhead. The effort to do so gained momentum this year when U.S. Rep. Mike Simpson, R-Idaho, unveiled his $33.5 billion concept that would remove the earthen portions of the dams and compensate affected communities and industries. Now Washington Gov. Jay Inslee and Sen. Patty Murray, D-Wash., are also looking at breaching and how services provided by the dams might be replaced. At the same time, the Biden administration is negotiating with the Nez Perce Tribe, Oregon and environmental groups in an attempt to settle decades of litigation over the dams. All three entities support breaching, something the federal government has long resisted.

Tattam says the poor-quality habitat on the John Day has an impact on juvenile fish survival. But so do the dams. Having just three dams to contend with, instead of eight, makes a difference.

“John Day fish are behind in freshwater. They are not producing as many smolts per spawner in freshwater as even just the neighboring Imnaha and Grande Ronde populations,” he said. “But they make up for it, or even surpass the other populations in the Columbia River and later in the ocean.”

Others note that chinook in the John Day and Salmon River had comparable survival rates decades ago. But they diverged after hydrosystem development between Lewiston and the Tri-Cities.

“Whatever side of the argument you fall on, something happened around 1975 when the Snake River dams were finished,” Storch said.

If you want to find good spring chinook habitat, just look at a relief map of central Idaho, says David Johnson, director of the Nez Perce Tribe’s Department of Fisheries Resources Management. It’s wrinkled with mountain valleys above 5,000 feet in elevation and peaks that reach even higher. Spawning streams, fed by spring and summer snowmelt, stay cool even in July and August.

Many are in wilderness areas owned and managed by the federal government. Those not protected as wilderness are mostly surrounded by public land where development is limited.

It once produced an estimated 2 million spring and summer chinook annually, 50 percent or more of the entire Columbia Basin population.

“The vast amount of remaining habitat in the Snake is the exact type of habitat they need. It’s mountain streams,” he said.

Johnson and other fisheries scientists contend removing the earthen portions of the four lower Snake River dams will reduce dam-related mortality, allowing the fish to achieve smolt-to-adult rates in the 2 to 6 percent range and take fuller advantage of their high-quality habitat. 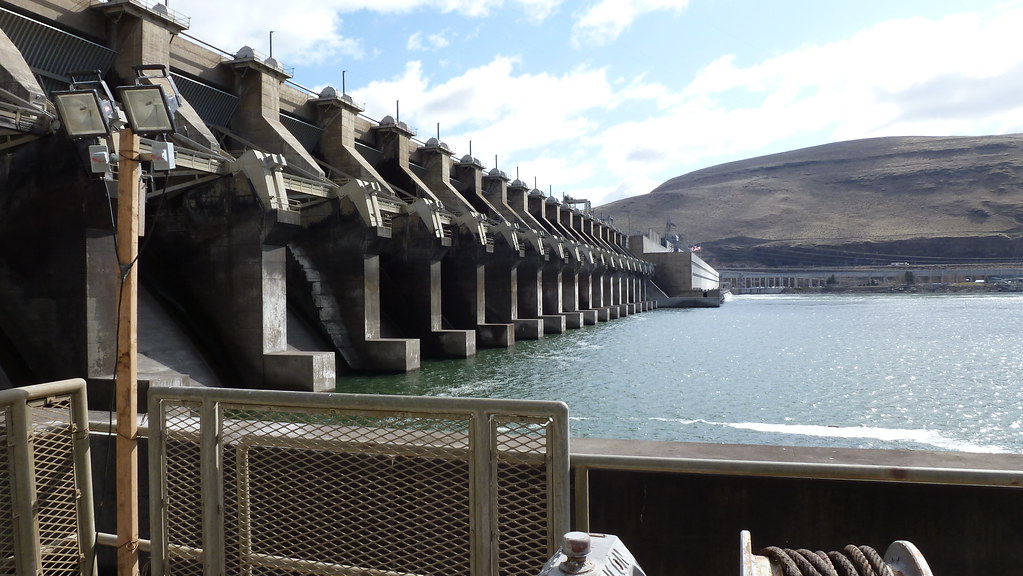 Much of that habitat sits at elevations that scientists expect to remain viable even as temperatures rise because of climate change. That is critical, said Jay Hesse, director of biological services for the Nez Perce Tribe’s Department of Fisheries Resources Management. As the climate warms, areas below 5,000 feet are likely to see more rain than snow during the winter. They will accumulate less snowpack, resulting in a much shorter duration of high spring flows that both adults and juveniles depend on. Streams will run lower and warmer in the summertime and surviving during the hottest days will be more difficult.

“The prediction is that snowpack-driven systems will not be existing under 5,000 feet or even higher,” Hesse said.

“That is why we see the Snake Basin as being so important to hanging on to these fish,” he said.

“Those fish spawn at 6,000 feet in elevation and the mountains go up from there and that is where the snowpack is predicted to remain in the future. Those fish will still be spawning and rearing in habitats that are driven by winter snow and spring snowmelt.”

But despite the high quality of habitat, wild Snake River spring chinook and steelhead are struggling. They have been under the protection of the Endangered Species Act for about 30 years. According to an assessment by the Nez Perce Tribe, 42 percent of wild Snake River spring chinook and 19 percent of wild steelhead have seen 50 or fewer spawning adults return to their spawning grounds for at least four consecutive years, putting them at risk for extinction.

Back on the John Day’s Middle Fork, Tattam records the redd and marks it by tying a piece of pink flagging to a nearby bush to ensure the nest isn’t double-counted in follow-up spawning surveys. At the end of the day, he and his team have counted only a handful of redds, far below the long-term average. Counts are down on the river’s North Fork as well. Like a lot of places in the Pacific Northwest, it’s a tough year for wild spring chinook salmon.

The river is showing vulnerability of its habitat. Tattam says the low numbers could be tied to the June heat wave but also noted this year’s adults are descendants of adults that returned and spawned in 2013 when another hot summer took a heavy toll on adult fish. Low numbers tend to beget low numbers.

“It would be common in big abundance years to walk up to some of these tail outs and see two or three females digging and four to eight males lined up by size jousting for position,” he said. “But right now I’m pretty happy to have seen two redds thus far. This could have been a really bad year, especially with the heat dome, but they somehow seemed to have survived it.”

Barker may be contacted at ebarker@lmtribune.com or at (208) 848-2273. Follow him on Twitter @ezebarker. A grant from the Institute for Journalism and Natural Resources helped defray some of the travel expenses associated with this series.