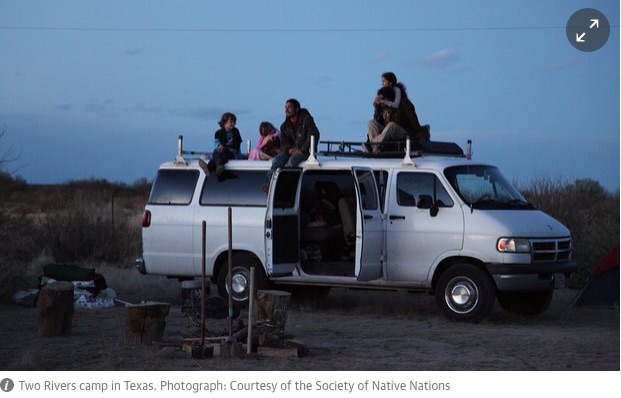 The Two Rivers camp, protesting the Trans-Pecos pipeline, is the latest sign that the Standing Rock movement is inspiring indigenous-led activism across the US

Indigenous activists have set up camps in the Texas desert to fight a pipeline project there, the latest sign that the Standing Rock “water protector” movement is inspiring Native American-led environmental protests across the US.

The Two Rivers camp, located south of Marfa near the border, has attracted dozens of demonstrators in its first week to protest the Trans-Pecos pipeline, a 148-mile project on track to transport fracked natural gas through the Big Bend region to Mexico.

Citing concerns about damage to the environment and sacred indigenous sites, the camp parallels the high-profile effort to block the Dakota Access pipeline (DAPL) and is one of multiple Native American land campaigns building on the momentum of the demonstrations in North Dakota.
“We’re going to follow the same model as Standing Rock,” said Frankie Orona, executive director of the Society of Native Nations and an organizer at the Two Rivers camp. “This is a huge historical moment for environmental issues, for protecting our water, protecting our land, protecting sacred sites and protecting treaties.”

Two Rivers emerged weeks after the Obama administration denied a key permit for the Dakota Access pipeline, a major victory for the Standing Rock tribe and thousands of indigenous and environmental activists who spent months camped in Cannon Ball in hopes of thwarting the $3.7bn oil project.

Though the fight against DAPL is not over – given that Donald Trump is an investor in the company and supporter of the project – the temporary win has energized ongoing indigenous environmental battles and inspired new ones.

The campaign against the Trans-Pecos project, which is also owned by Texas-based Energy Transfer Partners, has the closest connections to Standing Rock, with activists adopting similar tactics, including setting up spiritual camps in the region of construction and planning nonviolent “direct actions”.

“Our hope is that we can create a public pressure crisis,” said Lori Glover, a Big Bend Defense Coalition spokeswoman who owns the land in Texas where the camps are expanding. “I hope this helps us stop the pipeline long enough to get the government and Energy Transfer Partners’ attention and push them to do the right thing.”

Vicki Granado, ETP spokeswoman, said the Trans-Pecos pipeline is nearly 90% complete and defended the project in an en email, claiming that “underground pipelines provide the most environmentally safe and the most efficient means to transport natural gas, crude oil or other carbon-based energy products that are critical to Americans’ daily lives, and to our economy”.

Standing Rock garnered support from hundreds of indigenous tribes in a collaboration that some said was unprecedented, and Yolanda Blue Horse, a Native American activist in Texas, said she hoped Trans-Pecos would attract a similarly diverse and unified group.

Reports of intense police brutality and mistreatment in North Dakota have also inspired people to fight back, said Blue Horse, a member of the Rosebud Sioux tribe.

“What happened up there could very well happen to any of our communities if big money gets involved. That’s a scary thing.”

The protests escalated in Texas the same week that the US department of justice filed a motion against ETP to dismiss the company’s lawsuit challenging DAPL construction delays – the latest sign that Obama is working to impede the pipeline in his final days in office.

Some DAPL demonstrators are now on their way to Texas, according to Orona.
Outside of Texas, indigenous activists involved with Standing Rock have also recently turned their attention to environmental battles in a number of states, including Minnesota, Florida, Hawaii, Washington and Wyoming.

Elliott Moffett, a Nez Perce tribe member from Idaho, who has been fighting for the removal of dams to save wild salmon from going extinct, said the international attention on Standing Rock has helped the public better understand the intersection of indigenous rights and environmental activism.

“We’ve been here for thousands of years. We’ve had to deal with sustainability issues,” said Moffett, whose group Nimiipuu Protecting the Environment argues that dams in the Snake river impede tribal treaty rights.

In New Mexico, Native American groups have been fighting for stronger fracking restrictions after an oil field explosion affected a Navajo community. And after indigenous activists protested a proposed oil pipeline, which some had labeled “New Mexico’s DAPL”, the operator withdrew plans.

Lori Goodman, a Navajo activist and treasurer of Diné Citizens Against Ruining Environment, attributed the withdrawal to fears of a North Dakota-style protest.

“Standing Rock has really opened eyes. Now there’s no going back,” she said. “Enough is enough.”

After Standing Rock, some Native American activists said they hoped there would be broader support for protecting indigenous sites, even when there aren’t high-profile oil projects threatening the land.

“We’re still in a very perilous position regarding sacred places,” said Klee Benally, a Diné activist based in Arizona. “There is an awakening for indigenous resistance. It’s about cultural survival.”