The Bellingham Herald: ‘Spirit of the Waters’ totem pole journey begins. Here’s where you can see it 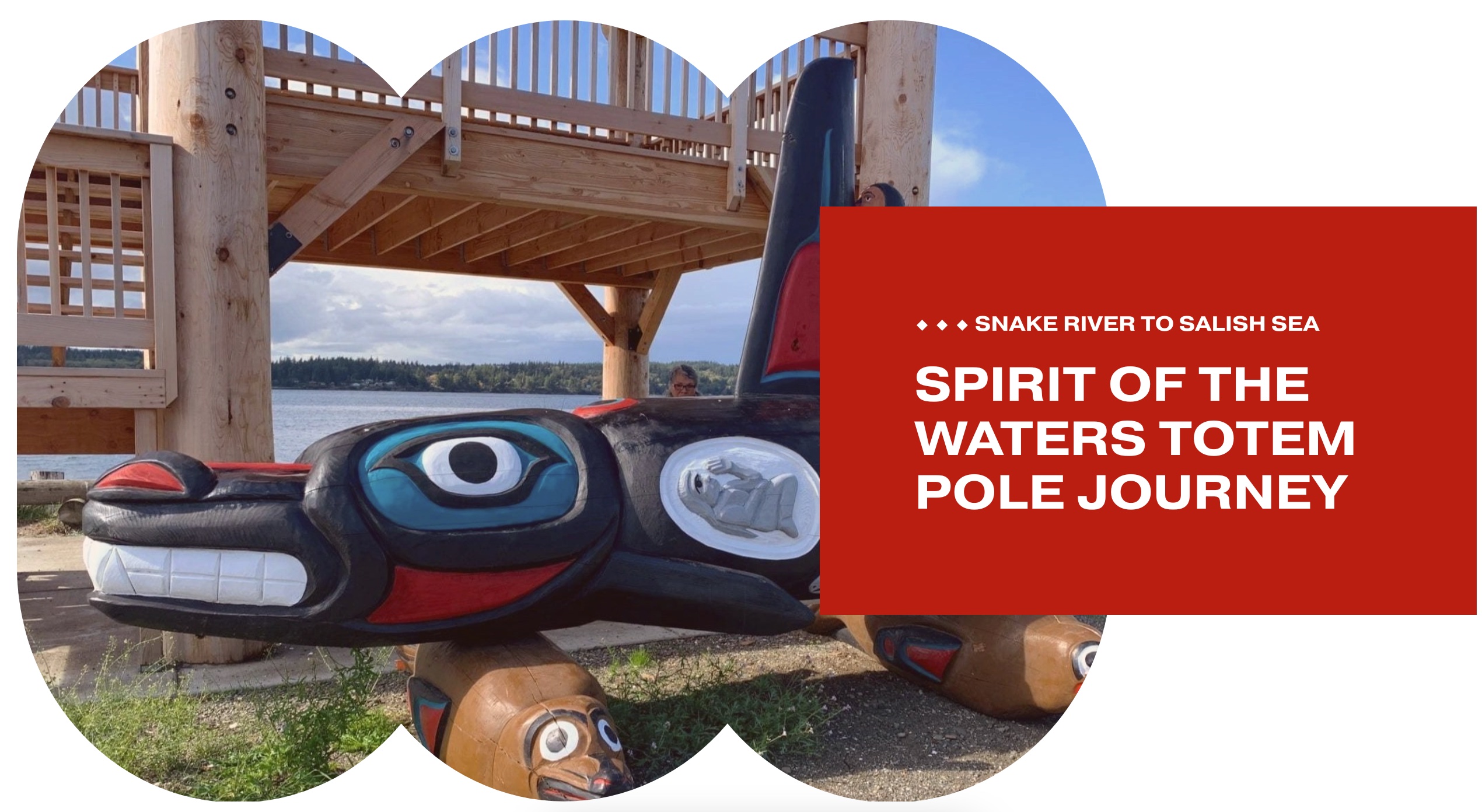 Lummi Tribal members and Native communities across the Pacific Northwest gathered with faith leaders, activists and neighbors for the Spirit of the Waters Totem Pole Journey launch Tuesday, May 3, at Bellingham Unitarian Fellowship.

The 2,300-mile journey highlights the vital role of the Snake River, salmon and orca to the lifeways and identities of Tribal communities in the region. The updated pole, created by House of Tears Carvers, will travel for 17 days through Tribal and metropolitan communities in Washington, Oregon and Idaho to advocate for the removal of dams on the Lower Snake River and for the health of salmon and orca.

The pole builds off the House of Tears Carvers’ 16-foot pole created for the journey to Miami to advocate for the repatriation of southern resident orca Sk’aliCh’elh-tenaut in 2018.

In addition to a fresh coat of paint, the pole — which has been displayed at the Stommish Grounds on the Lummi Reservation near Bellingham — features two 8-foot salmon representing the 150-pound “June hogs,” an extinct salmon of the Columbia River, master carver Jewell Praying Wolf James explained.

“We’re recognizing that all the way from the Chinooks at the mouth of the river to the people of Celilo Falls, Umatilla, Shoshone-Bannock, Nez Perce — we’re all salmon people. From the Columbia River to the Snake River to the Salish Sea,” James said in an interview with McClatchy. “The Salish Sea is being destroyed, life is dying and there’s more than just human beings that depend on it.”

The salmon replaced two seals from the original pole, which represented the food source of the transient orca pod.

A third 9-foot salmon featuring splashing water and a human on the side will join the totem pole on its journey. JoDe Goudy, Se’Si’Le board member and former chairman of the Yakama Nation, brought the piece along the Columbia River for various blessings.

At the tip of the pole’s central orca nose is an addition of a small orca, representing the calf of Tahlequah — a southern resident killer whale who garnered international attention after pushing her dead calf more than 1,000 miles in 2018. James said the red spot on the calf, which was originally carved by accident, now serves as a reminder that ship traffic is a danger to the whale population.

The new additions were carved from cedar from the Lummi Nation culture department. James estimates the updated pole weighs in at about 3,500 pounds.

“We need to restore the salmon run. We need to replenish the food for our orcas, our beloved relatives, our qw’e lh’ol’ me chen,” Siam’el wit said, advocating for the removal of the Lower Snake River dams.

In Xwlemi Chosen, the language of the Lhaq’temish (Lummi) people, orca are called “qw’e lh’ol’ me chen,” meaning “our relations who live under the water.”

“It’s time to restore Mother Nature back to how it is intended — as falls should fall, as rivers shall flow,” she said.

In a speech, Se’Si’Le founder, Lummi Tribal member and former chairman Jay Julius thanked James for his activism for the climate and Indigenous peoples and asked the community to follow his example.

Julius and Santana Rabang — who is of Coast Salish and Stó:lō Nation heritage — presented at the first-ever Indigenous Earth Day event at the Massachusetts Institute of Technology in April. Rabang spoke on behalf of Indigenous youth at the totem pole launch.

“These fights are going to be left to us and they’re showing us the way,” Rabang said about the elders and Indigenous leaders of the journey.

The launch featured songs from Lummi drummers and singers, music from Native flutist Peter Ali and a choir performance. Various local faith leaders blessed the pole’s journey and supported its message, including Echoes Pastor Emma Donohew — whose ancestor was an Oklahoma dam builder.

The event concluded with the community surrounding the pole to offer a group prayer.

The pole’s 17-day journey will continue in Oregon, then Idaho and will conclude in Washington:

For more information on the pole’s journey or to access virtual events, visit spiritofthewaters.org.