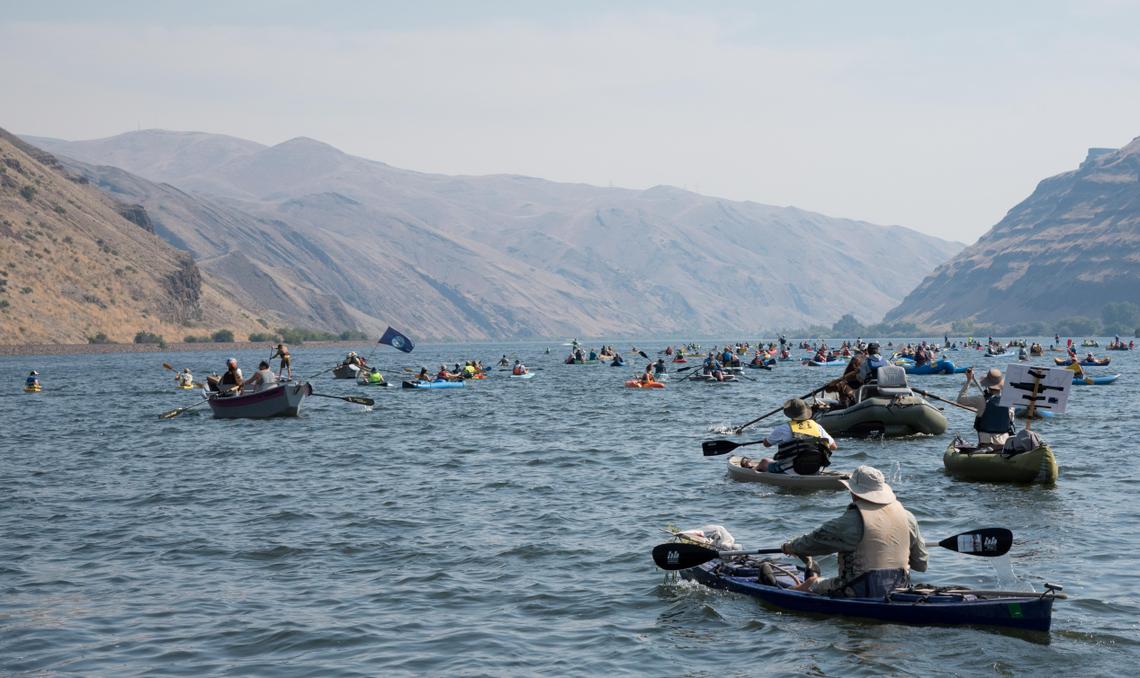 WASHINGTON – Sen. Patty Murray and Gov. Jay Inslee on Friday announced they will lead a regional process to consider “all options” to restore declining salmon and steelhead runs in the Columbia River Basin, including the potential breaching of the Lower Snake River dams.

In a joint statement, the Washington Democrats offered the first details of an initiative they first announced in May. In a virtual gathering of conservationists last week, Inslee outlined the process, which will assess what it would take to replace the transportation, hydropower and irrigation benefits provided by the four dams between Lewiston and the Tri-Cities – and if doing so is necessary to preserve salmon in the Snake River and its tributaries.

“We approach this question with open minds and without a predetermined decision,” according to Murray and Inslee’s statement. “Both of us believe that, for the region to move forward, the time has come to identify specific details for how the impacts of breach can, or cannot, be mitigated.”

Their announcement was made a day after the federal government and conservation groups agreed to pause a 20-year legal battle over measures to preserve salmon in the Columbia and Snake rivers.

Recognizing “the urgency of tackling this longstanding challenge as salmon runs continue to decline,” they wrote, their recommendations will be finished by the end of July 2022. Before that, they plan to conduct “robust outreach” to hear from communities across the Northwest, including tribes who say their fishing rights – guaranteed by treaties – are being undermined by declining salmon runs.

The statement also laid out a roadmap for legislation in Congress to keep dam breaching on the table. Murray aims to use the Water Resources Development Act, a bill Congress passes every two years, to authorize a federal study evaluating the cost and impact of dam breaching.

That legislation should pass in the second half of 2022, and the study – conducted by the Army Corps of Engineers or another federal agency – could pave the way for Congress to authorize dam breaching in a subsequent Water Resources Development Act in 2024 or 2026. While the Murray-Inslee process will make a recommendation on dam breaching, a federal study would only examine what such a move would take.

Reactions poured in from both sides of the dam breaching debate soon after Murray and Inslee made their announcement.

A coalition of 12 conservation groups that favors dam breaching – including Columbia Riverkeeper, the Idaho Conservation League and Trout Unlimited – welcomed the initiative, especially for its emphasis on involving tribes and Murray and Inslee’s decision not to “start from scratch,” promising to draw on the extensive research already done on an issue that has been debated for decades.

In a statement, Justin Hayes, executive director of the Idaho Conservation League, credited Murray for moving the process forward in Congress but cautioned that another federal study alone would not solve the region’s salmon wars.

The coalition pointed to a recent poll, conducted in July on their behalf, that found while most Washington voters were unaware of an effort to breach the dams and replace their benefits, 59% of them were open to that idea when it was described to them.

The poll also found, however, that far more Washington voters believe removing the dams is unnecessary than those who think breaching must happen to save salmon. That perspective is represented by the state’s three House GOP lawmakers, Reps. Cathy McMorris Rodgers of Spokane; Dan Newhouse of Sunnyside; and Jaime Herrera Beutler of Battle Ground.

“It is becoming more and more clear that the public and stakeholders who rely on the Columbia Snake River System have been shut out of conversations between the Biden administration, federal agencies, and groups whose sole mission is to breach the Lower Snake River dams,” the three Republicans said in a joint statement.

Calling the timing of Murray and Inslee’s announcement – a day after the Biden administration announced the pause in litigation – “suspicious at best,” the GOP lawmakers said the Murray-Inslee process “appears to be nothing more than a predetermined backdoor deal in the making.”

“It should sound the alarm for anyone interested in transparency and a balanced public dialogue over the vital role the dams play in the Pacific Northwest,” they said. “There is something fishy going on, and it’s not just the promising salmon returns we are seeing on the Lower Snake River.”

That last line of the Republicans’ statement refers to the number of spring and summer chinook counted at the uppermost dam on the Lower Snake River this year, a 17% increase from a year earlier, which they have cited to argue salmon can recover without breaching the dams.

Tribes and conservation groups counter that even with that increase, those chinook and other fish that return to spawn in the Snake River Basin are far below their historic levels. That figure also includes hatchery fish, which are not counted for the purposes of the Endangered Species Act, under which Snake River spring and summer chinook are listed as “threatened.”

Samuel Penney, chairman of the Nez Perce Tribal Council, hailed Inslee and Murray’s move, which he said comes at “a moment of crisis for the Northwest that tribes and their peoples perhaps have seen most clearly and worryingly.”

“Salmon are at a crisis; there is a plainly intertwined climate warming crisis; and for tribes this is a moment of frank demand that the United States address 90 years of tribal and environmental injustice imposed by the Columbia Power System on tribes and their lands and waters,” Penney said in a statement.

“The Columbia Power System was literally constructed out of the rivers and reservations and homelands of 19 Columbia Basin tribes. When that destructive history is truly understood, the modesty of the present request is plain, and the science supporting it is clear: salmon need a free-flowing, climate-resilient Lower Snake River, not a series of slow, easily-warmed reservoirs. The Nez Perce Tribe and its people intend to ensure that salmon do not go extinct on our watch.”

Kurt Miller, the executive director of Northwest RiverPartners, hydropower advocacy group based in Vancouver, Washington, called Murray and Inslee’s commitment to salmon recovery “commendable,” but questioned its transparency and worried it would begin with the assumption that dam breaching is the best way to save Snake River salmon.

“I think that the truth is people don’t like the idea of climate change being the cause, because then they feel helpless,” Miller said, pointing to declines in chinook salmon along the Pacific coast of the U.S. and Canada, which scientists attribute partly to changing ocean conditions.

Joseph Bogaard, executive director of Save Our Wild Salmon, a coalition of fishing associations and conservation groups, said he was encouraged by Inslee and Murray’s announcement and hoped for progress toward dam breaching next year.

“We have a certain political window of opportunity in 2022,” he said. “And that sort of doubles the sense of urgency.”

Bogaard added that he credits Rep. Mike Simpson, an Idaho Republican, for jump-starting the process when he endorsed dam breaching as part of a comprehensive proposal he released in February, after years of private meetings with stakeholders in the region.

Simpson did not respond to a request for comment on Murray’s and Inslee’s approach, which appears to mirror his in many ways, although Simpson’s proposal failed to garner the support from either Democrats or Republicans he needed to secure funding through bipartisan infrastructure legislation that passed the Senate in August.

Sen. Maria Cantwell, who chairs the Senate Commerce Committee, a key panel with jurisdiction over parts of the federal hydropower system, also welcomed the announcement from her fellow Washington Democrats.

“Salmon are an integral part of the Northwest economy and environment,” Cantwell said in a statement. “I look forward to stakeholders getting out of the courtroom and collaborating around science-based solutions. I look forward to hearing from all Washingtonians, including Tribes, farmers, fishermen, and river users, and working with my colleagues on this issue.”

Murray and Inslee will soon announce a way for the public to submit written comments as part of their process, they said in the statement.