Spokesman-Review: Snake River spring Chinook struggling like never before, feds decide against classifying them as ‘endangered’ 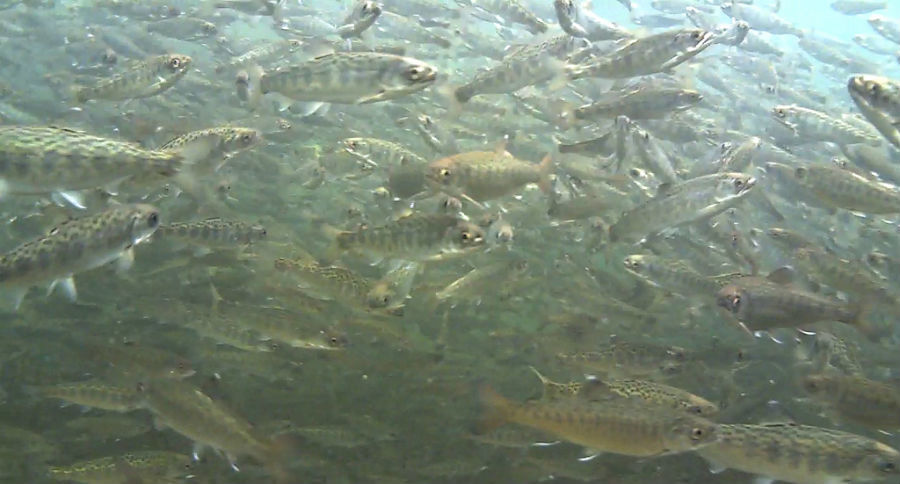 LEWISTON – Federal fisheries managers found that wild salmon and steelhead from the Snake and Columbia rivers are threatened by climate change like never before and that urgent action is required to save the fish.

But officials at the National Oceanic and Atmospheric Administration opted to leave their status under the Endangered Species Act unchanged, surprising some who thought Snake River spring chinook might be reclassified from threatened to endangered. They also did not list breaching the lower Snake River dams as one of the recommended actions to help the fish. That is a departure from a draft report the agency released in July saying the dams need to come out.

The difference relates to the goal of the two disparate documents. In July, the agency released a draft report saying the dams should be breached, along with other aggressive actions, if the region wants to restore wild fish to healthy and harvestable levels.

The status reviews of four species that return to the Snake River and three to the mid- and upper Columbia River released Thursday look at less lofty goals – keeping the fish from going extinct and restoring them to the point ESA protection is not needed. For example, the delisting criteria calls for a return of about 33,500 wild spring and summer chinook to their spawning grounds. The healthy and harvestable level, set by the NOAA convened Columbia River Partnership Task Force, is about 98,000 wild spring and summer chinook returning to the Snake River.

Biologists believe about 12,000 to 15,000 wild spring and summer chinook returned to the Snake River basin this year – that is up from previous years but still well shy of the number needed for delisting and miles from the higher goal for harvestable numbers.

“We’re not anywhere close to that. We’re kind of worried about moving in the other direction,” said Michael Milstein, a spokesperson for NOAA Fisheries. “It’s such an ambitious goal, much beyond what the Endangered Species Act requires. But that’s what people have told us we should be shooting for.”

Checking in
Every five years or so, the agency is required to review the status of fish and marine mammals protected by the ESA. The idea is to assess if recovery efforts are on pace and if changes need to be made.“

It is a snapshot of how the species have done in the last five years and how they are faring overall at a critical time,” Michael Tehan, Assistant Regional Administrator for the Interior Columbia Basin for the agency, said in a news release “We are seeing the impacts of climate change play out, which demonstrates the urgency of moving the most critical recovery actions ahead now. The takeaway message is that we cannot wait.”

The previous half-decade has been a rough one for salmon and steelhead from the Columbia basin and beyond. Poor ocean conditions and often hostile summer temperatures in freshwater have hit the fish hard. According to the review, 27 populations of wild Snake River spring chinook declined by an average of 55% and face a moderate-to-high risk of extinction. Steelhead declined by about 50% and face a moderate extinction risk. Sockeye continue to be critically imperiled. Fall chinook are doing much better and it’s conceivable the fish could be removed from federal protection if that pattern continues.

“Fall-run chinook salmon are a bright spot that reflect the hard work that tribes and states have put into their recovery,” Tehan said. “We know what the species needs and we have been able to apply that.”

Nancy Munn, a NOAA scientist who led many of the reviews, said the agency seriously considered moving Snake River spring chinook from threatened to endangered. Instead of taking that step, they plan to closely watch fish numbers and expect a rebound if ocean conditions continue to improve as they did last year.

“If that doesn’t happen, if we see continued declines when ocean conditions are good, then we’re going to take a closer look,” she said.

To address climate change and other threats, the agency is stressing the need to make inland spawning habitat more resilient to higher summer temperatures and lower flows through large-scale habitat restoration projects. They also call for reductions in predation by sea lions and other marine mammals that feast on returning adults in the lower Columbia River.

Wild salmon and steelhead have been under federal protection for about three decades. They face a number of threats including dams on the Snake and Columbia Rivers, degraded habitat, competition from hatchery fish, predation and, in some cases, harvest.

More information on the status reviews is available at bit.ly/3PyKSqb.