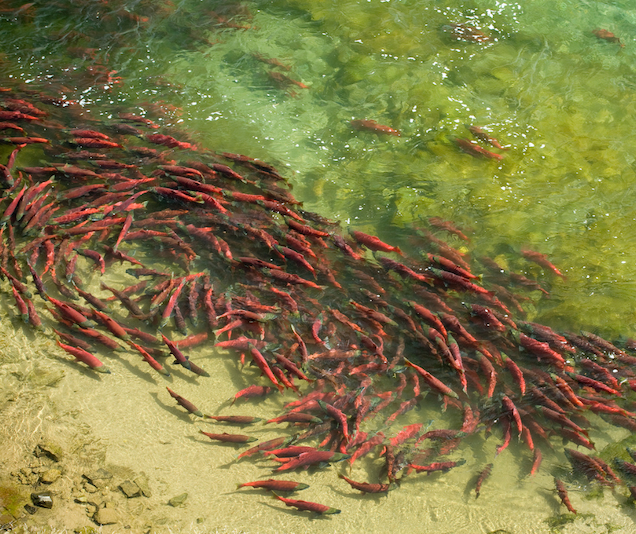 WASHINGTON – Leaders of Northwest tribes on Wednesday welcomed new commitments from President Joe Biden and members of his administration at the first in-person Tribal Nations Summit held by the White House in six years.

In a series of speeches and panel discussions with tribal leaders, Biden, Vice President Kamala Harris and several other top administration officials pledged to give tribes more say in federal decision-making, to set uniform standards guiding how agencies consult with tribes and to abide by treaties between tribes and the federal government.

“Everyone is entitled to be treated with respect and dignity,” Biden told a crowd of more than 300 tribal leaders and representatives. “This is especially true for tribal nations to whom the United States owes a solemn trust and treaty obligations that we haven’t always lived up to.”

In conjunction with the summit, which fell at the end of Native American Heritage Month, the White House announced a 10-year plan to revitalize Native languages, along with a slew of other efforts aimed at improving the lives of Indigenous people living on and off reservations.

“I was really impressed with President Biden’s speech today,” said Leonard Forsman, chairman of the Suquamish Tribal Council, crediting the administration for “fulfilling the promises the United States made with our tribes in the mid-1800s when the treaties were signed.”

Forsman, who also serves as president of the Affiliated Tribes of Northwest Indians, a group that represents 57 tribes in the region, hailed the Biden administration’s efforts to address climate change and investments in infrastructure that help preserve salmon runs, which he called “so extremely valuable to our culture and to our heritage, and something we all have in common with each other.”

The administration announced $135 million in funding to help 11 tribes relocate in response to climate change, including a $25 million grant to the Quinault Indian Nation on the Olympic Peninsula, where the coastal town of Taholah faces a growing risk of flooding as sea levels rise.

Gary Aitken Jr., vice-chairman of the Kootenai Tribal Council, said that while he was frustrated by the summit’s format – heavy on panel discussions with little time for tribal leaders to ask questions or voice concerns – he appreciates that Biden and his administration “actually try to understand our needs and who we are and honor us, and also the commitments the U.S. has made in the past.”

Aitken also applauded the work of Interior Secretary Deb Haaland, a Laguna Pueblo member and the first Native American to lead the agency, as well as Biden appointing other Indigenous people to key roles in his administration.

“Just putting Natives in places of power, of trust – people who understand the plight of the people they’re dealing with – I think that’s been really important,” he said. “Secretary Haaland, she’s done a tremendous job. She deserves to be there and I’m glad and proud she is there.”

Before she introduced Biden on Wednesday, Haaland acknowledged the significance of her role.

“You and I know first-hand, Native people have not always had friends in the White House,” Haaland said. “I am so proud to lead this work here at Interior. This agency once charged with assimilating our people through family separation is now leading the work to heal those broken promises and to strengthen Indian Country.”

A presidential memorandum signed by Biden will standardize the way federal agencies consult with tribes before making decisions that affect them, while requiring annual training on the tribal consultation process for all federal employees who work with tribes or on policies that impact tribes.

Jeremy Takala, a member of the Yakama Nation Tribal Council, called Biden’s announcements “very promising,” and said meaningful involvement for tribes is especially important for salmon recovery efforts and the development of energy projects. He said he hopes that will help avoid a repeat of the federal hydropower projects in the Columbia Basin that largely excluded the Yakama Nation and other tribes in the 20th century.

Along with the Yakama Nation, the Nez Perce Tribe has been at the forefront of efforts to restore salmon runs in the Columbia and Snake rivers, even if that means breaching the four lower Snake River dams.

Nez Perce Chairman Samuel Penney said he had a brief face-to-face meeting with Biden and told the president his tribe needs the administration’s help to preserve their ability to fish in their “usual and accustomed places,” as guaranteed by the 1855 Treaty of Walla Walla.

“My main message was that Pacific Northwest salmon is at the point of extinction,” Penney said. “We don’t have time to do more and more studies. We need action now. So we’re hoping that the administration will hold true to that and make sure that those treaty-reserved resources are protected, for not only today but for future generations.”

Sen. Patty Murray and Gov. Jay Inslee, both Washington Democrats, announced in August they couldn’t support breaching the Snake River dams until the benefits they provide to the region could be replaced by new infrastructure. Penney said he hopes the Biden administration’s legislative agenda, including a bipartisan infrastructure law Congress passed in November 2021, could make such a transition possible sooner rather than later.

Carol Evans, chairwoman of the Spokane Tribal Council, didn’t attend the summit, but said in a phone call Monday she was happy to see the return of the in-person event because it’s important for federal leaders to meet directly with their tribal counterparts.

“A lot of times, we are the ones with the solutions on important matters,” Evans said. “But it is important, from the president down, that they acknowledge their trust responsibility.”

President Barack Obama began holding the yearly summits in 2009 with the aim of improving engagement between the U.S. government and the country’s 574 federally recognized tribes. The Trump administration didn’t continue the tradition, and last year’s event – the first under Biden – was held virtually due to COVID-19.

Jarred-Michael Erickson, chairman of the Colville Business Council, was attending the summit for the first time and said having so many tribal leaders in one place again was an important step. He was especially happy about Biden asking Congress to fund the Indian Health Service on a permanent basis, as well as the administration’s efforts to streamline the process for converting individually owned parcels of land from “fee” status to “trust” status, a major priority of the Colville Tribes.

“It’s huge to have this many tribal leaders and nations here in one area to voice our concerns,” Erickson said. “It makes my heart happy to see us all here in one big group.”