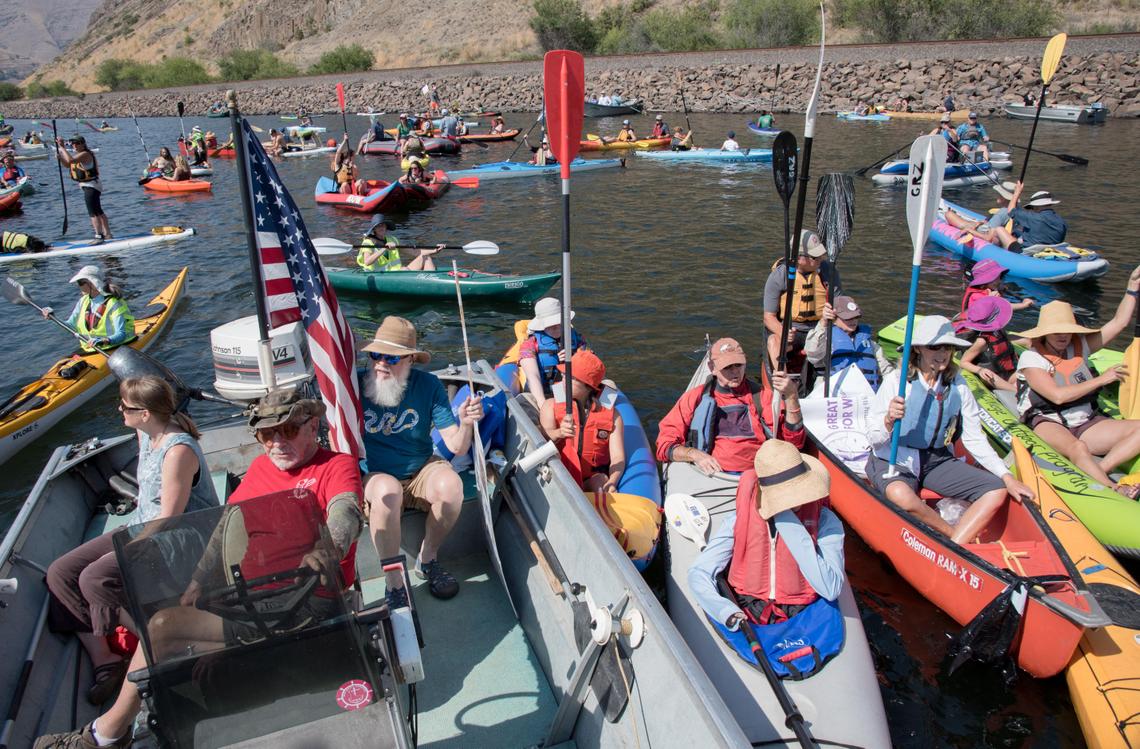 CLARKSTON – Navigating the slack water of the Snake River near Lewiston, Bill Chetwood remembers the days when the water was free-flowing.

The staunch conservative and former marine remembers watching salmon streaming below his boat. He remembers a riparian area that cut through the dry and high desert hills winding all the way to the Columbia River.

Chetwood, 88, is a lifelong resident of the Lewiston area. He is one of the few who can recall the Snake River before four dams slowed the river’s water.

He wants all that back.

On Saturday, Chetwood joined roughly 600 others in the annual Free the Snake Flotilla, a protest of the four lower Snake River Dams.
Participants brought a variety of craft, including kayaks, motorboats, sailboats and stand-up paddleboards.

They came from Idaho, Washington, Minnesota, California and elsewhere. Anglers, environmentalists and tribal members were represented, among others.

“This is the biggest flotilla yet,” said Sam Mace, the Inland Northwest Director for Save Our Wild Salmon and one of the organizers of the event.

The tribal members headed downstream, meeting up with the larger Free the Snake Flotilla.

One reason many attended this year’s Free the Snake was the plight of the southern resident killer whales. The orcas garnered international attention earlier this year when Tahlequah, a southern resident orca, pushed the corpse of her newborn baby for weeks.

Tahlequah is one of 75 orcas remaining in the Puget Sound, a 30-year-low. Salmon make up roughly 50 percent of the orcas’ diet.

Spring and summer chinook, fall chinook and steelhead were all listed as threatened in the 1990s.

“The orcas are going to die if we don’t breach the dams,” said Chiara Rose, a student at Western Washington University in Bellingham. “They are very dependent on this specific ecosystem.”

Like Chetwood, others attended the flotilla because they’d like to see large returns of wild salmon again in the Snake River system. And for members of the Nez Perce Tribe, the dams represent an historical injustice: When built, they flooded many traditional Nez Perce gathering
sites and burial grounds.

“We talk about the injustice, it’s ongoing,” said Julien Matthews, a Nez Perce tribal member. “Our relatives are buried there under that water.” 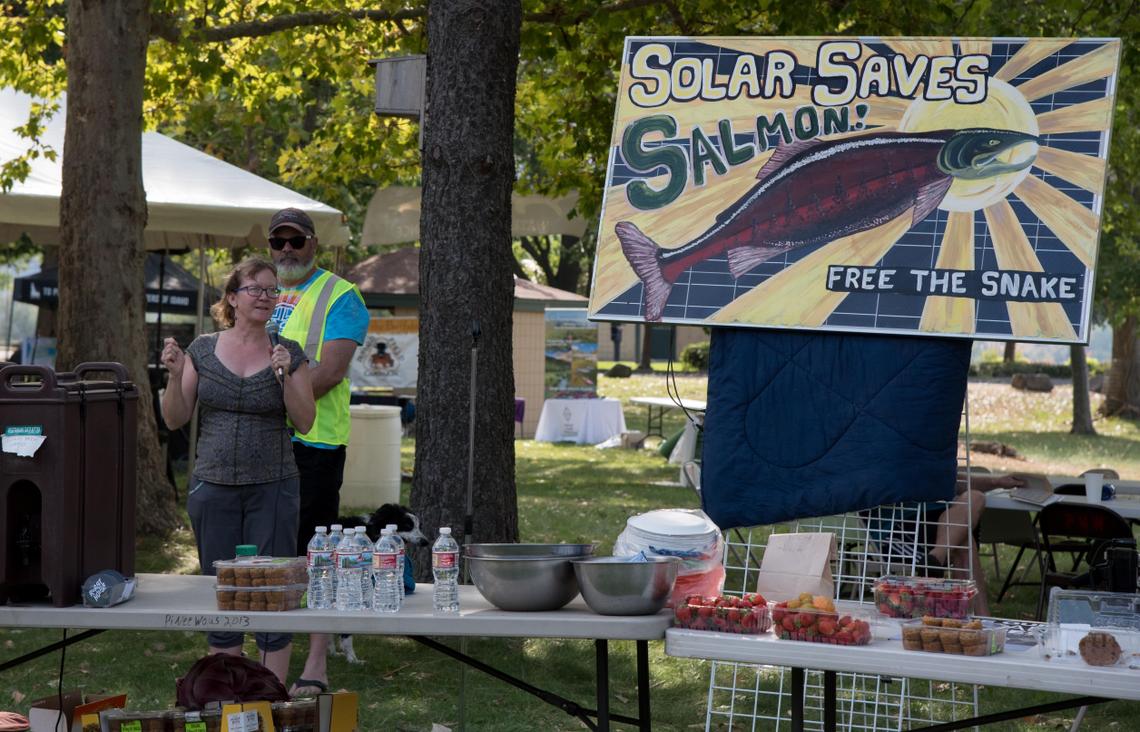 Matthews is also a board member of Nimiipuu Protecting the Environment, an environmental organization that focuses on upholding tribal treaty
rights.

After the flotilla, environmentalist and activist Winona LaDuke addressed the gathering at a campground west of Lewiston. In a wide-ranging talk, she urged those present to keep fighting for the removal of the dams and “make it beautiful.”

On the same day, and just miles upriver from the Free the Snake Flotilla, a pro-dam event was held. For many in the Lewiston and Clarkston areas, a world without dams is inconceivable, those demonstrators said.

River Fest, as the counterprotest was called, was hosted by the Port of Clarkston in conjunction with the Port of Lewiston. The festival aims to
celebrate the Snake and Clearwater rivers in all their uses, said Wanda Keefer, the Clarkston port manager.

The festival was held in Granite Park, near the confluence of the Snake and Clearwater rivers.

“This whole town is built on these dams,” said Jeff Sayre, the chairman of the Snake River Multi-use Advocates. “(Dams are) an easy target to point at, but there are not silver bullets to this issue.”

Sayre calls the dam issue the “most complicated” natural resources issue in the country.

“To me, a lot of the rhetoric out there has more to do with dam removal than salmon survival,” said David Doeringsfeld, the Lewiston port manager. “To a lot of people, dam removal is a religion.”

The dams ship grain grown in Idaho and Washington to Portland and beyond, supplement the electrical grid during peak power times and the pooled flatwater allows boats and fisherman to recreate on a lake-like surface, Doeringsfeld said.

However, barge traffic, which was one of the primary reasons for the construction of the dams in the first place, has declined in recent years.

And a study in April found that the energy produced by the four lower Snake River dams could be replaced by a mix of other clean energy
sources.

The study was commissioned by the NW Energy Coalition and conducted by Energy Strategies, a Utah-based company, using the Bonneville Power Administration’s data. However, some questioned the study, arguing that the amount of energy that could be created from solar and wind was unrealistic and that the increased cost to ratepayers was underreported, among other things.

The dams will stay in the public eye, even if outrage over the orca whales’ plight diminishes.

In 2016, a federal judge ruled the U.S. government hasn’t done enough to improve Northwest salmon runs and ordered an environmental review that’s due in 2021, urging officials to consider removing the four dams on the Snake River.

“I’m a little afraid I’m not going to see a free-flowing river,” he said.