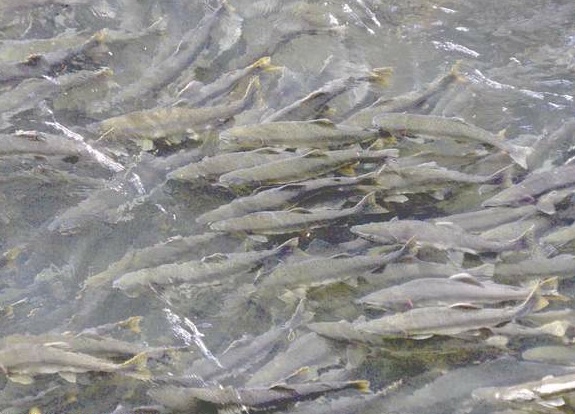 WASHINGTON – While the attention of Northwest salmon advocates has been focused on a renewed debate over the fate of the Lower Snake River dams, a Washington Democrat has quietly worked to secure an unprecedented investment in salmon recovery through two bills Congress appears poised to pass.

Sen. Maria Cantwell has used her position at the helm of the Senate’s influential Commerce Committee to include more than $2.8 billion for salmon recovery and ecosystem restoration efforts in the bipartisan infrastructure bill the Senate passed in August.

Although Democrats have had to cut their social policy and climate bill known as the Build Back Better Act to half its original size to please centrists in the party, the pared-down version the House unveiled Thursday still includes nearly $2 billion more for hatcheries, habitat restoration and research to understand why more salmon are dying at sea.

After months of haggling between the party’s moderate and progressive wings, Democrats appear close to sending both bills to President Joe Biden’s desk in a matter of weeks.

“This is important investment, regardless of anything else that’s happening,” Cantwell said in an interview, nodding to the heated debate over the Snake River dams that has escalated since February, when Idaho GOP Rep. Mike Simpson proposed breaching them to help restore salmon and steelhead runs.

While even the most aggressive timeline wouldn’t breach the Snake River dams for at least a decade, Cantwell said she wanted to focus on giving salmon recovery “a huge boost at a time when it’s being most impacted – not 10 years from now, not 15 years from now, but right now.”

Each lawmaker’s ability to get things done in Congress depends in large part on the committees on which they serve. Simpson sought to use his perch on the House Appropriations Committee, which writes the checks to spend federal money, to include $33.5 billion in the bipartisan infrastructure bill to breach the dams and replace the benefits they provide.

After the Idaho Republican’s pitch failed to garner enough support to make it into that legislation, Washington Sen. Patty Murray, a member of Senate Democratic leadership, announced Oct. 22 she plans to get Congress to authorize a federal study of the cost and impact of breaching the Snake River dams.

Cantwell, meanwhile, become chair of the Commerce, Science and Transportation Committee after Democrats won two Senate runoff races in Georgia in January and took control of the Senate. The panel’s broad jurisdiction includes oversight of high-profile tech companies and the aviation industry, but it also oversees the National Oceanic and Atmospheric Administration, or NOAA, an agency with a major role in the nation’s fisheries.

Biden campaigned on a promise to rebuild the nation’s roads, bridges and other infrastructure – while atoning for the harm some of that infrastructure has done – and Cantwell said as soon as she took over the chair of the Commerce Committee, she knew she had a rare opportunity to secure funds to replace the culverts that block fish from many of their traditional spawning grounds.

“We said, ‘Look, if the president’s going to talk about infrastructure investment, one thing’s really clear: A lot of infrastructure has damaged our fish passage and we need to do something about that,’ ” Cantwell said.

A 2018 Supreme Court ruling requires the state to fix more than 400 fish passages under Western Washington highways, at a cost of some $3.7 billion, by 2030.

“A fractured river and stream system in the Pacific Northwest is among the diversity of challenges salmon are faced with in the region,” Dan McDonald, president of the Yakima Bait Company, said in a statement. “These investments, including $1 billion for culvert removal and modernization, mark significant progress in mitigating some of those challenges.”

Narrowly seizing control of the Senate gave Democrats access to a tool called budget reconciliation, which lets the majority party pass budget-related legislation – provisions that either raise revenue or spend federal money – without the threat of the minority party blocking it with a filibuster.

As a bipartisan group of senators negotiated the infrastructure bill, which includes about $550 billion in new spending over five years, Democrats piled the rest of Biden’s agenda into what has become the Build Back Better Act, whose total price stands at $1.75 trillion over a decade.

Whittling that bill down from its original $3.5 trillion price tag has forced Democrats to fight over limited funding for their respective priorities, but Cantwell said powerful allies like House Speaker Nancy Pelosi – a California Democrat who’s also interested in coastal ecosystems – helped keep the salmon funding in the bill.

In a meeting last week with Sen. Joe Manchin, a centrist Democrat who has scrutinized every piece of the Build Back Better Act to cut costs, Cantwell said Manchin didn’t object to the funds for salmon, perhaps partly because the West Virginia senator is an avid angler.

The single biggest piece of salmon recovery funding in the Build Back Better Act is $1 billion for habitat restoration grants, which could help clear a backlog of projects across the state.

According to the Washington State Recreation and Conservation Office, there are 157 unfunded salmon recovery projects east of the Cascades in need of $56.6 million that would benefit salmon in the Columbia, Yakima and Snake rivers. In the Puget Sound region, there are 218 salmon restoration projects awaiting $117 million in funding.

“One billion dollars is several orders of magnitude over what has been provided for salmon recovery annually and marks an historic investment for the salmon, orcas, and citizens of Washington,” Megan Duffy, director of the Washington State Recreation and Conservation Office, wrote in an email.

“This level of investment will enable transformative restoration of our estuaries and floodplains, reconnect lost habitat, move infrastructure out of harm’s way, and conduct the studies and monitoring we need to guide the state’s efforts,” Duffy said. “It will allow for implementation of the bigger, more complex, game-changing type of projects. This is a giant step toward delivering on our promises to the tribes who depend on salmon for their way of life.”

The Democrats’ bill would also make a historic investment in hatcheries, which are vital to keep enough fish in the region’s waters to feed the southern resident orcas and allow tribal, commercial and recreational fishing to continue amid dwindling numbers of natural-origin fish. State and tribal hatcheries could benefit from a new $400 million NOAA grant program, and another $19.6 million in hatchery funding would go to tribes through the Bureau of Indian Affairs.

“The Colville Tribes has been working for decades to restore salmon in the region and improve hatchery capacity, including a phased approach to reintroduce salmon into the blocked area above Chief Joseph and Grand Coulee dams,” Andy Joseph, Jr., chairman of the Colville Business Council, said in a statement. “The Tribes appreciates Senator Cantwell’s leadership to fund these Department of Commerce programs and hopes to utilize these programs in its ongoing efforts.”

An equally crucial provision, Cantwell said, is the $500 million investment in salmon research at NOAA.

“One thing that is clear is we need a lot more science,” she said. “Why are salmon dying at sea? We don’t have any science on that, so how are we supposed to make these decisions?”

NOAA monitors ocean conditions and tracks the impact of various factors on the number of salmon that return to spawn each year, but Cantwell said the agency’s past directors have routinely told Congress they didn’t have enough money for salmon research and recovery efforts.

On top of the nearly $5 billion for salmon restoration and research between the two bills, $6 billion in the Build Back Better Act would go to a NOAA fund that could partly support Northwest coastal ecosystems. The bipartisan infrastructure bill would also reauthorize the Sport Fish Restoration and Boating Trust Fund – which supports $650 million a year in fishery restoration and conservation programs – and includes another $33 billion for water quality programs run by the Environmental Protection Agency that could indirectly benefit fish.

While Republicans have objected to the overall cost of the Build Back Better Act and how Democrats want to pay for it by raising taxes on the richest Americans and large corporations, no GOP lawmaker has taken specific aim at the salmon provisions. Nineteen Republican senators voted for the infrastructure bill, including Sens. Mike Crapo and Jim Risch of Idaho.

Some criticism has come from progressives who lament how some of the Democrats’ priorities, like the expanded child tax credit, have been scaled back to fit within the smaller Build Back Better Act while other provisions have stayed in the bill. David Dayen, executive editor of the liberal magazine The American Prospect, wrote Friday that while he supported the salmon restoration funds, they could be passed through separate legislation and Democrats should have focused their limited resources on other programs.

Democratic aides have worked over the weekend to craft the details of the Build Back Better Act, based on a compromise framework the White House presented Thursday. As Manchin and fellow centrist Sen. Kyrsten Sinema, D-Ariz., forced the party to scale back the bill, House progressives have insisted they will vote for the infrastructure package only when the Senate passes the larger bill. With Biden’s agenda and his party’s fate in next year’s elections counting on the two bills passing, Democrats in Congress are likely to strike a deal in the coming weeks.

Orion Donovan-Smith's reporting for The Spokesman-Review is funded in part by Report for America and by members of the Spokane community. This story can be republished by other organizations for free under a Creative Commons license. For more information on this, please contact our newspaper’s managing editor.