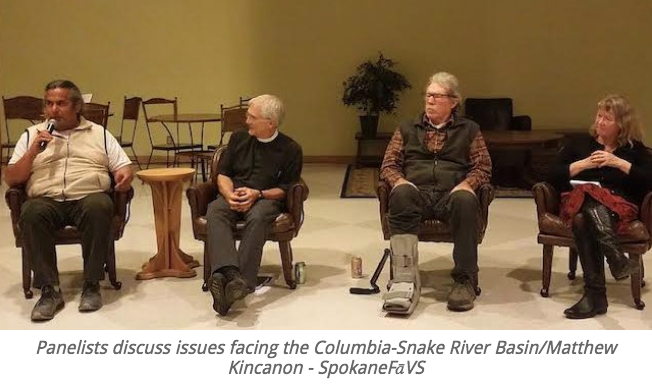 At a “Spokane Loaves and Fishes,” event on Tuesday night at the Cathedral of St. John the Evangelist a panel of farmers, commercial fishermen, Northwest tribal members and activists discussed issues concerning the dams and salmon conservation on the Columbia-Snake River Basin.

The event, hosted by Earth Ministry and Save Our Wild Salmon, was aimed at addressing the well-being and future of the river, explained Earth Ministry Program and Outreach Director Jessica Zimmerle.

“We believe in a future in which we can honor tribal treaty rights and restore salmon and ensure the livelihood of our farmers and fishermen, all with a vibrant, free-flowing lower Snake River,” she said.

Zimmerle then shared a success story where a campaign that Earth Ministry was involved in facilitated dialogue about closing Washington’s last coal power plant, TransAlta, in Centralia. The ensuing discussions between representatives from the plant and environmentalists resulted in plans to phase it out and transition into a solar farm.

Zimmerle said the story was one of hope that can get people’s imaginations going for what the region could look like.

Sam Mace, panelist and Inland Northwest director of Save Our Wild Salmon, provided an overview of the current issues regarding the salmon and opportunities for recovery.

She said Save Our Wild Salmon, which was founded in 1991, spent a few years working on having salmon co-exist with the dams still in the system.  However, after looking at the science, economics, continued decline of fisheries, failure to honor treaty rights and impacts on commercial and sport fishing communities, they decided that they had to endorse lower Snake River dam removal.

Mace explained that barging, which was the main purpose of the lower Snake River dams, has been declining and the energy produced by the dams is not worth what it once was, bringing into question whether the dams are worth maintaining.

She added that the public perception of removing dams and restoring rivers has changed.

Panelists were asked what a future that worked for all parties involved in the issue look like in the Inland Northwest. Bryan Jones, a  fourth generation wheat farmer from Dusty, responded by saying farmers should be provided with a way to ship their grain as well as assurances to those who would be put out of business.

The Rev Bill Osborne, rector of St. Stephen’s Episcopal Church, asked if dams were needed for irrigation and transportation. Mace noted, though, that the lower Snake River dams were meant for barging rather than store water for irrigation, supporting the deeper pipes solution.

When asked how the economy would be impacted if gran was shipped elsewhere, grain farmer Don Scheuerman said that most groups are cooperatives and that profitability at the expense of environmental and social degradation should be considered.  He added that looking for other markets, products and processing is a big paradigm type shift in terms of psyche.

He added that decentralization of food systems would be a wise decision and grain sheds could be easily built in Spokane that can help with transitioning from chemical soil to biological-grown soil, but they are only partial solutions rather than total solutions.

Circling back to the question about the future Nez Perce Tribe member Julian Matthews, director of “A Healing Journey,” and a member Nimiipuu Protecting the Environment, described how treaty hunting and fishing rights of the tribes are the law of the land and everybody, including the tribes, are paying for the dams.

“We’re paying for those dams, and they’re old and degrading and so we have to keep dumping all of this money into them and so how much is enough?” he asked.

As a taxpayer, Matthews said he does not see the dams as affording everyone a good benefit.

Zimmerle said she hopes this was the start of a conversation, with the panelists providing insights on how to carry the dialogue forward.  These included making sure elected officials are dealing with the issue, giving communities fact sheets about the salmon to help avoid spreading misinformation and show people the truth about the matter as gently as possible because getting to people who have their minds made up is difficult, among others.