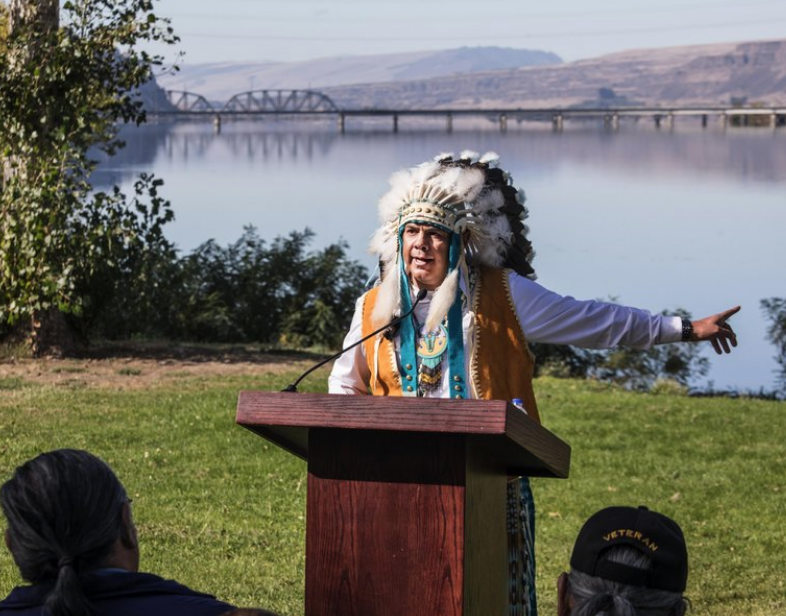 CELILO VILLAGE, Wasco County, Oregon — In a historic stand, the Yakama and Lummi nations called Monday for taking down the Bonneville, The Dalles and John Day dams on the Columbia River to restore salmon runs once the mightiest in the world.

Jay Julius, chairman of the Lummi Nation, and JoDe Goudy, chairman of the Yakama Nation, gathered — on Indigenous Peoples Day — at Celilo Village, all that is left of the fishing and cultural center at Celilo Falls, the most productive salmon fishery in the world for some 11,000 years. The falls were drowned beneath the reservoir of The Dalles Dam in 1957.

Julius and Goudy said taking down the dams is the only hope to save the salmon runs their people depend on, and restore to health the endangered southern resident killer whales. The Columbia River Basin once produced as many as 10 million to 16 million salmon per year.

Returns today are a fraction of that even in good years.

Goudy said Columbus Day, a federal holiday also on Monday, celebrates the invasion of the lands and waters of indigenous people under the colonial doctrine of discovery, under which Christian Europeans seized native lands.

The lower Columbia River dams inundated many usual and accustomed fishing sites of the Confederated Tribes and Bands of the Yakama Nation, and led to the decline of salmon, lamprey and other traditional foods.

“The tribe never consented to the construction of the lower Columbia River dams,” Goudy said.

“On behalf of the Yakama Nation and those things that cannot speak for themselves, I call on the United States to reject the doctrine of Christian discovery and immediately remove the Bonneville Dam, Dalles Dam and John Day Dam.”

Julius said the Lummi Nation stands with Yakama in calling for the removal of the dams. Tribes throughout the region are in a constant battle to defend their way of life, Julius said. “Whether defeating coal ports, opposing increased vessel traffic on the Salish Sea, repairing culverts or removing invasive Atlantic salmon, to leave to future generations a lifeway promised to our ancestors 164 years ago,” he said.

While calls for removal of the four dams on the Lower Snake River have been heard for decades, the demand to knock out some of the region’s larger main-stem dams is a first. How such a removal would even proceed, and what it would mean for energy or salmon recovery, has never been analyzed.

In addition to power generation, the dams are part of a system of locks that provide inland navigation all the way to Lewiston, Idaho. Some $2 billion in commercial cargo travels the Columbia and Snake river systems each year, according to U.S. Army Corps of Engineers statistics reported by The Associated Press. In 2017, that cargo included 53 percent of U.S. wheat exports.

Southern resident orcas prey on Columbia and Snake River fish, as well as fish from Puget Sound, the Fraser River in B.C. and even California’s Sacramento River. The loss of Columbia and Snake fish is probably the single biggest change in the amount of food available to them, according to the National Oceanic and Atmospheric Administration’s recovery plan for the whales.

There are only 73 southern resident left. Lack of available, adequate, quality food is one of three main threats to their survival, in addition to pollution and noise.

The three dams are among the oldest in the Columbia and Snake River system. They back up miles of the river, which pools in reservoirs that heat up in the summer. The reservoirs lengthen the travel time of young fish heading downriver, and warmer water temperatures caused by the cumulative effects of climate change are adding to the stress salmon endure. In particularly bad years, salmon also die in the thousands before reaching their spawning grounds.

The call for main-stem dam removal adds a new drumbeat for change on the river, where power markets already are shaking up the Bonneville Power Administration, which markets electricity from the dams.

A surge of wind and solar energy on the grid — along with power generation from natural gas — have upended BPA’s historic position as the low-cost provider in the region.

BPA must foot the bill for the costs of maintaining an aging hydroelectric system and for bankrolling salmon restoration efforts. The administration is also scrambling to remain competitive when long-term contracts with public utilities come up in 2028.

Yet as coal plants increasingly are phased out of the Western power grid, hydropower will become an increasingly important asset as the regional grid operators struggle to reduce the risk of brownouts or blackouts during periods of peak demand that unfold during days when solar and wind power may be at a low ebb.

The lower Columbia dams have deep regional support that would likely make any effort to remove them an even tougher battle than the years-long campaign by salmon advocates to remove the Lower Snake River dams.

“We have great respect for the Yakama and Lummi nations and for Indigenous Peoples Day, but we believe that the lower Columbia River dams are a critical carbon free resource in our fight against the climate crisis that threatens the health and well-being of the entire Northwest, “ said a statement released by Northwest RiverPartners, which has a membership that includes ports, businesses and consumer-owned utilities.

The Portland-based BPA also released a statement responding to the tribes’ Monday announcement.

“We remain focused on continuing our work with our many partners throughout the region to address the environmental, economic and cultural issues within the Columbia River Basin,” said the statement. BPA officials declined further comment

In Washington, Gov. Jay Inslee’s spokeswoman Tara Lee said that the governor “supports rebuilding fish runs to tribal communities … including improving fish passage, and exploring ways to reintroduce salmon in areas blocked by dams such as the upper Columbia.”

When ask to clarify that statement, Lee said Inslee “previously said he is open to exploring options around the dams.”

Federal agencies are seeking approval from a federal judge for operation of their hydropower system. The agencies have since 1992 been on the defensive against calls for a major overhaul on the river that go back to the first federal judge who heard the case, Malcom Marsh, in 1993.