Seattle Times: What Biden’s agenda on the environment could mean for the Pacific Northwest 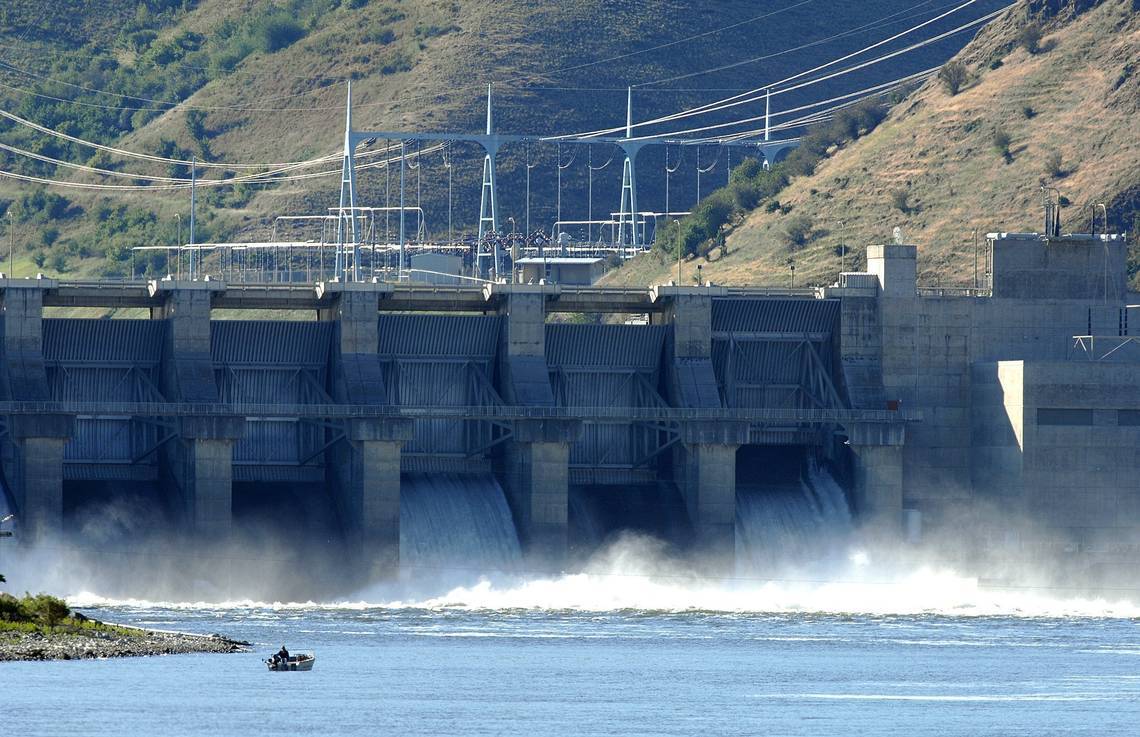 From reintroduction of the grizzly bear to its wild North Cascades redoubt to attacking climate change, a wide range of environmental policies could see a new direction in the Pacific Northwest under a Biden administration.

For starters, government and nonprofit policy leaders say they are looking forward to a return to science as a basis for environmental policymaking. Perhaps nowhere is this more true than on climate warming.

Gov. Jay Inslee has championed Washington climate and energy policies sharply at odds with a president who dismissed the threats posed by greenhouse gas emissions in a warming world.

Inslee now has a powerful ally in President-elect Joe Biden. Biden’s campaign platform calls for dramatically stepping up a U.S. transition away from fossil fuels to set the nation on a path to achieving net-zero greenhouse gas emissions by midcentury, which means that whatever carbon pollution is emitted into the atmosphere is offset by other measures. And, since the election, there has been speculation that Inslee will be asked to join the new Democratic administration to help Biden pull off this dramatic course correction in climate policy.

Biden would need approval from Congress to authorize $2 trillion in spending he proposes to help the nation move off fossil fuels and reach an interim goal of removing greenhouse gas emissions from power generation by 2035.

Passage of such spending or other climate legislation could be difficult even with a Democratic majority in control of the Senate and an even tougher task if Republicans are able to win runoff races in Georgia and retain control of the upper chamber.

From his first day in office, Biden also is expected to use executive orders to take a wide range of measures, including putting the U.S. back into the Paris Agreement on climate, developing new automotive fuel economy standards weakened by President Donald Trump and increasing regulations to control the release of methane — a potent greenhouse gas — during oil and gas production.

Biden also will try to block a Trump administration effort to open the Arctic National Wildlife Refuge coastal plain to oil exploration, which included a post-election announcement of the beginning of a process that could result in lease sales of land before Inauguration Day.

Sen. Maria Cantwell, D-Wash., in a statement released Nov. 16, called the Trump administration action, a “last ditch effort” that she predicted would not withstand court scrutiny.

Biden has said he would make a big push to expand wind, solar and other renewable sources of energy, which would add federal support to a movement already underway in Washington as utilities scramble to move off of coal and natural gas generation to comply with legislative deadlines set in Washington for 2045.

Biden also is expected to continue the bipartisan support that was found even during the Trump administration for investing federal dollars in hopes of developing a new generation of nuclear energy plants.

In October, Bellevue-based TerraPower, chaired by Bill Gates, received a $80 million federal Energy Department grant, the first installment of what is intended to be a seven-year effort to test, license and build its first advanced nuclear plant, and possible U.S. locations include a site near Richland, where Energy Northwest now operates the state’s only commercial nuclear plant.

The Biden administration also is expected to revive the Environmental Protection Agency’s Obama-era opposition to the Pebble Mine in southwest Alaska.

Developers have proposed an open-pit copper, gold and molybdenum mine in southwest Alaska that has faced fierce opposition from Bristol Bay fishermen, many of whom are from Washington, who fear that salmon would be put at risk.

Biden, in an August statement, said the Bristol Bay region is “no place for a mine. The Obama-Biden administration reached that conclusion when we ran a rigorous, science-based process in 2014, and it is still true today.”

Here are other issues likely to see a push for change under Biden:

Biden could reinstate the protection for roadless areas in the Tongass National Forest in southeast Alaska, the nation’s largest, with some of its last and largest tracts of old growth.

Forest conservationists said they also hope for policies that emphasize carbon sequestration in the management of public forests, and economic incentives for rural communities to retain and protect forests.

“We need to start utilizing forests for what they can be,” said Peter Goldman, director and managing attorney at the nonprofit Washington Forest Law Center. “Carbon storage.”

Salmon activists say they want to see federal legal action dropped or overturned that challenges state authority to regulate temperature in the Columbia and Snake rivers. A renewed effort to take out dams on the Klamath River and to develop federal support for dam removal on the Lower Snake River is already underway.

“One of the best things we can do to mitigate the effects of climate change is restore healthy and free-flowing rivers,” said Bob Irvin, president of the nonprofit American Rivers. “We are thrilled Klamath dam removals are going forward and hopeful that we will see progress in moving toward removal of the four Lower Snake River dams.

“It has become very clear there are alternatives for the energy they generate and the transportation they provide, but there is no alternative for the salmon or the tribes and communities depending on salmon for eons.”

Dam proponents are willing to put all options on the table for salmon recovery, said Kurt Miller, executive director of the nonprofit Northwest River Partners, an association of utilities, ports and other businesses. But he urged that any solution has to look beyond the Snake Basin to the broader Pacific Coast recovery problem, especially climate change. Climate warming, he noted, and its effects on the ocean is a threat so dire some scientists warn Snake River salmon could be extinct within a few decades.

The Biden administration could reverse the withdrawal of federal Endangered Species Act protection for the gray wolf; reconsider listing for the wolverine; restart reintroduction of the grizzly bear to the North Cascades region; and restore effects due to climate change as criteria for listing and critical habitat designation.

Robb Krehbiel, Northwest representative for the nonprofit Defenders of Wildlife, said the Trump administration’s on-again, off-again stance on grizzly reintroduction exemplified policymaking that was not based in science.

“This is the last native carnivore still missing from the Cascades,” Krehbiel said. “Bringing the grizzly back home would just be huge to restoring this ecosystem.”

The bears help maintain open, alpine meadows surely as a rototiller, as they dig in the ground with their big claws and muscular backs for insects, roots and small mammals, such as marmots and ground squirrels, said Bill Gaines, an independent biologist based in Leavenworth, who has worked on grizzly recovery since the 1980s.

In Yellowstone National Park, for instance, reintroduction of grizzly bears and wolves resulted in a redistribution of elk from riverbanks, allowing vegetation and birds to come back to those areas. Similar effects could happen if the grizzly were recovered in one of the few areas suited to them in the Lower 48: the more than 6.5 million acres of wild, open area comprised of the North Cascades National Park and parts of several national forests, Gaines said.

Biden could restore full protection for birds under the Migratory Bird Treaty Act to include fines against industries for unintentional harm, such as oil spills. The more than 100-year-old treaty has been repeatedly attacked by the Trump administration.

Under a Biden administration, the government could increase federal funding and cost-sharing for infrastructure to protect clean water in Puget Sound, including storm water and wastewater projects, and reinstate limits on water pollution implemented by fish-consumption standards devised by Washington state and tribes.

“I have been around this fish consumption issue for 20 years of my life and I did it to protect my tribe from contamination,” said Russell Hepfer, vice chairman of the Lower Elwha Klallam tribal council, and a member of the state Leadership Council of the Puget Sound Partnership. “We just took two dams down on the Elwha River. What good does opening 70 miles of habitat do if salmon have to swim through poison to get there?”

He supports reinstating limits on water pollution supported by Washington state and tribes but recently overturned by the Trump administration.

Biden could reopen the issue of noise created by Navy training flights over Olympic National Park and the effects of Growler overflights on communities and endangered southern resident orcas.

Washington state has sued over a 2019 Navy decision to increase by roughly 33% the number of EA-18G Growlers operations from Naval Air Station Whidbey Island, which has alarmed and angered some residents on Whidbey and on the San Juan Islands, as well as the Olympic Peninsula.

“We need to take a look at how to change operations and not fly over Olympic National Park and look at (effects on) people and orca in Puget Sound,” said Rob Smith, Northwest regional director of the nonprofit National Parks Conservation Association.

Above all, he said, he looks forward to professional and permanent agency directors that base decision-making on the rule of law, science and respect for the public process to make progress on protecting the environment, a sentiment echoed by others.

“I am just glad we are talking about hopes for the future and transformational change now, instead of holding the line and trying to stop bad activities,” said Mindy Roberts, Puget Sound program director for the nonprofit Washington Environmental Council. “We have a lot of work to do but that is a lot healthier place to start.”