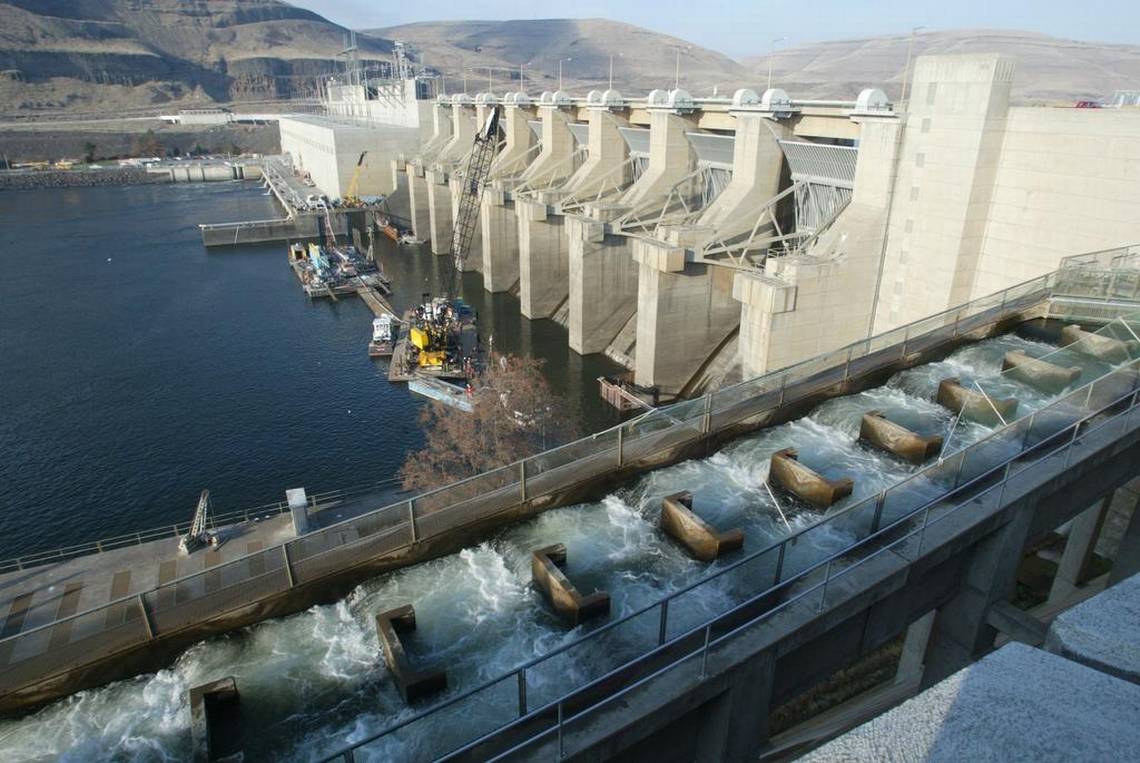 The Columbia is the great river of the West, winding from the north to meet its largest tributary, the Snake in Eastern Washington, then dividing the states of Oregon and Washington on its push to the sea. Big and powerful, its wild energy has been tamed to engineered stair steps controlled by locks and dams.

But what has worked well for navigation and carbon-free hydropower production has been a killer for salmon, as its now-lazy reservoirs heat up in summer. When the water gets hot enough for long enough, salmon stop migrating, and even die of stress and disease.

Today Columbia and Snake River salmon, and orcas that depend on them, are at risk of extinction. And Washington state regulators are taking a new regulatory role to chill fish-killing hot water at four dams in the lower Columbia, and four in the lower Snake.

Regulators also have a new tool to work with, in a just-published analysis of heat pollution in the river by the U.S. Environmental Protection Agency (EPA), open to public comment until July 21,

Temperatures always have spiked in the rivers at times in summer, even before the dams. But today, the effects of the dams combined with the cumulative effects of climate change, push temperatures in the Columbia and lower Snake rivers over the state maximum temperature of 68 degrees for weeks on end, the EPA found. 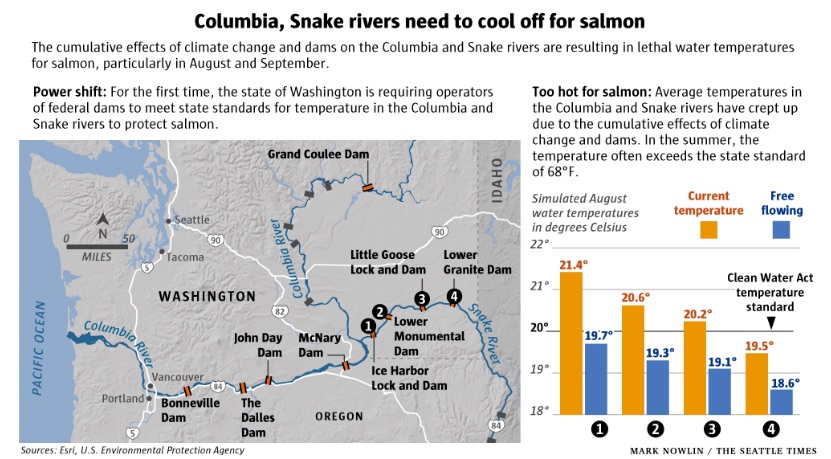 Impacts vary by dam location, and time of year. In general, temperatures are highest in August, and the lower down in the Columbia Basin the dam, the bigger the problem. John Day Dam, east of The Dalles, was the biggest offender in the EPA’s analysis, with the biggest cumulative temperature impact.

Brett VandenHeuvel, executive director at Columbia Riverkeeper, said only dam removal on the lower Snake can save orcas and salmon from extinction. “We are beyond tinkering at the edges,” he said.

This is the first time Washington has engaged its authority to regulate water-quality standards, including temperature, at federal dams — though it already does so at nonfederal dams all over the state. There are many steps ahead in the process, including public review, and rights to appeal.

Temperature is not a new problem on the Columbia and Snake. Releases of cold water from big storage dams upstream and infrastructure built at several dams already are used to help cool water temperatures in summer. But the cooling effects are soon swamped by hot water downstream.

So much heat is baked into the river by climate change that on the lower Columbia, the temperature standard could not be met at three of the four dams in August even in an entirely free flowing river, the EPA found.

That just shows the state standard is unachievable, some said — particularly with summer water temperatures already over the limit before the Columbia and Snake even cross the borders from B.C. and Idaho into Washington. “We and our members acknowledge that temperature is a really serious issue,” said Kurt Miller, executive director of Northwest River Partners, which represents industrial river users and utilities.

“But we are concerned the plan that eventually emerges from this could be really costly for electricity customers across the region, without being able to achieve the goal,” Miller said. “That would be a bad outcome.”

It’s too early for that kind of talk, state regulators say.

“Everyone wants to jump to ‘Oh this is impossible,’ ” said Vince McGowan, water quality program manager for Ecology, which will work with the U.S. Army Corps of Engineers, which operates the dams, to implement state temperature standards. The Corps has two years to generate temperature management plans for the dams. A whole suite of actions could be taken to cool the rivers, up to and including dam removal.

“This is just the beginning, we are going to have that opportunity to talk about what can happen and what is feasible,” McGowan said.

“We are on a path where we can have those conversations with dam operators working with us on how they are going to meet our temperature standards,” McGowan said. “Which are just critical for protecting and restoring salmon runs.”

STRUGGLING FISH
Temperature is only one of the problems facing Columbia and Snake salmon — but when the problem is severe and sustained, hot water is a major threat to survival for fish already struggling to hang on.

More than a dozen runs of salmon and steelhead are listed as threatened and endangered in the Columbia and Snake rivers. Despite spending billions of dollars to save Columbia Basin salmon, since the first listing in 1991 not a single salmon run has recovered. Now another species is at risk: the southern resident orcas, down to a population of just 72, in part because they cannot reliably get enough Chinook salmon, their preferred food, to eat.

The orcas take fish out of a vast hunting range. But the Columbia and Snake are such important food sources some scientists believe the orcas cannot beat extinction without dam removal on the lower Snake to boost runs in the river, once the source of 40% of all Columbia Basin spring and summer Chinook. “I really believe if they don’t take the lower Snake dams out we are not going to recover the whales,” said Sam Wasser, director of the Center for Conservation Biology at the University of Washington, who has led a multiyear study of nutritional stress in the southern resident orcas based on analyzing hormones in the whales’ scat.

The EPA documented a warming trend in the Columbia and Snake rivers since 1960 of 1.5 degrees Celsius, or 2.75 degrees Fahrenheit, plus or minus half a degree. Salmon are cold-water animals and even slightly elevated temperatures for extended periods can kill them. The problem is predicted to get worse, because of rising air temperatures and changing weather, snowpack and runoff patterns. How much worse depends on how much people pollute and warm the atmosphere with carbon emissions, primarily by burning fossil fuels.

It’s a world that wasn’t thought of back when the dams were built — most of them before Washington adopted its temperature standard under the Clean Water Act.

SPECTACULAR RIVER
Until the dam-building era began in earnest in the early 1930s, the wild Columbia was a spectacular slasher of a river, sticklebacked with bone crushing rock, swirling with sucking whirlpools, foaming with rapids, chutes and drops, and rainbowed with spray as it smashed its way through rock walls in a 1,290-mile run from B.C. to the Pacific.

Home to every species of salmon and steelhead, the river was alive in every season of the year and thronged with salmon 10 to 16 million strong, the wealth of native people living from its abundance.

But the river is now also a unique source for hydropower, with a steep drop draining the snowmelt from mountain ranges across the 259,000-square-mile Columbia River basin. Eventually 281 larger dams were built throughout the basin, home to 40% of the hydropower capacity of the entire nation, juicing power lines all over the West.

But dams also alter rivers in many ways that on the Columbia and lower Snake are combining with climate change to heat the river by an order of magnitude more than any other cause, the EPA found. The dams create a backwater effect that extends upstream, in large impoundments of water. That also slows water travel times, to 7 to 15 times longer between upstream and downstream points in the river today than under free flowing conditions in the Columbia, and 8 to 13 times longer on the lower Snake, the EPA reported.

The channel widths of the river also are wider in reservoirs that act as slow-moving heat sinks. The run-of-river dams on the main-stem Columbia and lower Snake also don’t have the deep, cold water reserves of the big storage dams upstream, or the cooling freshets of free flow.

The Snake was a hot river in summer even before the dams, notes Matt Rabe, director of public affairs for the Corps’ Northwestern Region. But the dams and climate change have combined to create a much bigger temperature problem for fish over many more days in summer, despite what the Corps has already done to attack the problem.

“Obviously,” Rabe said, “temperature is something everyone has had their eye on for a long time.”

But the lower Snake River heats up, too: At Ice Harbor Dam, temperatures exceeded the state standard on average in August 100% of the time.

The EPA findings are stoking long-simmering controversy in the region over dam removal on the lower Snake River. Using a mathematical model to assess the temperature impacts under varying conditions, the EPA estimated a free-flowing lower Snake River would be within state temperature limits, even in August.

The Columbia and Snake are essential sources of chinook salmon for southern resident orcas, providing food at a hungry time of year before the orcas make their way to their summer feeding grounds in the Salish Sea, the transboundary waters between the U.S. and Canada, and Puget Sound.