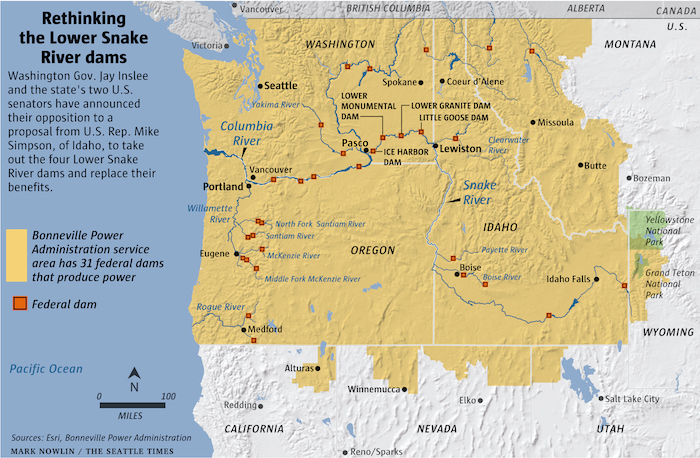 Under questions from Indigenous leaders about the threat of extinction for Snake River salmon, Washington Gov. Jay Inslee has called for a study on how to replace benefits of the four Lower Snake River dams.

Inslee and Washington’s senior U.S. Sen. Patty Murray are expected to have more to say about the study in the coming weeks.

Inslee made his remarks Thursday at a virtual fundraiser for Washington Conservation Voters, convened remotely by CEO Alyssa Macy and featuring a panel discussion with Inslee, Macy, and Shannon Wheeler, vice chairman of the Nez Perce Tribe.

Macy, a citizen of the Confederated Tribes of Warm Springs, Oregon, has led Conservation Voters and nonprofit Washington Environmental Council, where she also is CEO, to endorse, for the first time, dam removal on the Lower Snake to recover salmon.

The Nez Perce Tribe has been a leader in the fight for dam removal. In his remarks Thursday, Wheeler said the salmon are crucial to the Nez Perce and other tribes that have united around dam removal, from the interior of the Columbia Basin to the salt water of Puget Sound.

Restoring salmon is imperative to live up to the treaty promises made to tribes that ceded millions of acres to the U.S. — but reserved their rights to fish, hunt and gather in their traditional territories forever, Wheeler said. “The thing to recognize here is salmon are in crisis.”

Losing salmon when they could be saved, for people whose cultural identity depend on them, “is something short of genocide,” Wheeler said in an interview. “But it is right there.

“The fear is that when this chain of events starts happening, it really puts our people in a disarray of who we are. Not only historically, but what is in our blood, what is in our heart. There is that emptiness that will be there for our people, to have to live in that type of sadness, from something that we can fix, and change and correct.”

Irrigators pumping from a pool created by one of the dams say they are open to dam removal if compensation is provided to adapt their equipment so they can keep farming.

Inslee first called for the study at a salmon orca summit convened by tribes all over the region in July. He stressed this week that he is making no announcement at this time about dam breaching. But he called for a study to be completed by next summer on replacing the benefits of the dams.

“I think the next step is for us to define how to replace the services of the Snake River dams if they are breached,” Inslee said. “We know they are a salmon impediment.
“We know salmon are at the brink of extinction.”

A poll recently released by Washington Conservation Voters found nearly 60% of the state’s voters support a plan to remove the Lower Snake River dams to prevent salmon extinction if the plan also includes investments in clean energy, transportation for farm products, and irrigation.

The poll of 800 voters in the state was conducted by The Mellman Group.

But Kurt Miller, executive director of Northwest RiverPartners, representing ports, utilities and other river users, said Inslee “is really getting the cart before the horse, unless he has already decided in his mind the dams should be breached.”

It’s illogical, Miller argued, to talk about replacing the dams’ services until the Northwest has fully decarbonized its energy sources.

Lower Snake River dam removal has riled the region in legal fights and debates for decades. But the debate took on new energy last winter when Republican U.S. Rep. Mike Simpson, of Idaho, proposed spending billions in the infrastructure package now before Congress to replace benefits of the dams and breach them to benefit salmon.
The proposal never gained traction with Washington lawmakers — but the issue if anything is picking up speed as tribes add their clout to an issue only made more urgent by climate warming that is stoking extinction risk.

The future is being written by decisions being made now, Macy said. “We must center on environmental justice … honor and uphold tribal sovereignty with our actions.”

The study should spur a regional consideration about how to seize the moment for innovation, Wheeler said, to not only make people whole in a transition to dam breaching but “smarter, better, stronger and richer.