Seattle Times: This tribe has lived on the coast of Washington for thousands of years. Now climate change is forcing it uphill 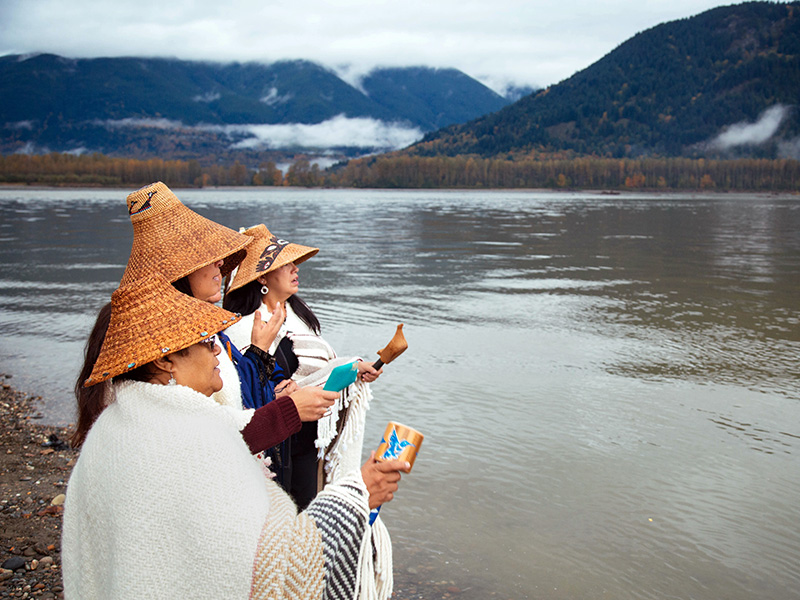 Now the tribe, which lived at sea level for thousands of years, is moving its village up the hill as the effects of climate change take hold.

The village provided a somber backdrop Monday during a historic visit from Deb Haaland, the secretary of interior — and the nation’s first Native American Cabinet secretary. While meeting with tribal leaders, she promised hundreds of millions of dollars in aid to tribal nations to combat the threat of a warming planet.

The visit, Haaland’s first to Washington state since her appointment to the Biden Administration, coincided with the release of a dire report from the United Nations Intergovernmental Panel on Climate Change, predicting global havoc due to human-caused climate warming.

The report’s predictions of droughts, floods, rising seas and fires could not have been more personal to the people of the Quinault Indian Nation. Intensified rain during winter months, melting glaciers and sea-level rise are combining to drive the tribe inland.

Haaland teared up as she spoke of the importance of tribal homelands and how her visit here, where she greeted the sunrise on the beach, made her all the more determined to
protect tribal communities.

“It’s pretty clear and it’s pretty easy to see … why we need to take action and why we need to do everything we can to protect these beautiful areas,” Haaland said. “For the sake of nature, but also because people have lived here for thousands of years and they deserve to have their homeland preserved. They deserve to know that in the future their grandchildren can rely on a place that is their ancestral homeland.”

Haaland warned the climate crisis was “happening now” and that inland tribal and Indigenous communities are also vulnerable “to the impacts of wildfire and drought, as our coastal communities face the threats of … coastal erosion, storm surges and rising seas.”

U.S. Rep. Derek Kilmer, D-Gig Harbor, Haaland’s former colleague in the House, introduced her at a brief news conference. Kilmer, who has sponsored legislation in the House to get tribes out of harm’s way, said he understands the climate threat.

“It isn’t until you visit places like Taholah, the Quileute School in La Push and the villages of the Hoh and Makah tribes when you really get to truly understand the imminent threats facing our tribal communities,” Kilmer said.

The Biden administration also is committed to helping upgrade broadband access in Indian Country, Haaland said, where some tribal governments are still on dial-up.

The administration has made available nearly $1 billion in grants to expand broadband access and adoption on tribal land.

Asked whether she also supports funding in the infrastructure bill to take down four hydropower dams on the Lower Snake River and replace their benefits, as tribes around the Northwest and U.S. have demanded, Haaland acknowledged the need to save salmon that have been at the center of tribal cultures for generations uncounted.

“What I will say is that of course drought and climate change are wreaking havoc on our natural systems. The salmon are extremely important to the tribes here,” Haaland said. “They have sustained them for millennia and I feel very strongly that we should be doing every common-sense action to ensure the survival of tribes and their sustenance as they have had it for thousands of years.”

Fawn Sharp, vice president of the Quinault Indian Nation and president of the National Congress of American Indians said she has spoken to Haaland about the proposal and that tribes will continue to advance dam removal on the Lower Snake in multiple forums.

Moving a village: “It hurts”

Work is already underway at Taholah to move the tribe to higher ground. While the Quinault have always lived in sight of the sea and the river that carries their name — right at sea level — now their future lies in the woods, uphill.

Larry Ralston, treasurer of the Quinault Indian Nation, teared up as he spoke of the need to tear down the buildings and homes the tribe holds dear.

The work began with the Generations Building, opened last April, home of services for seniors and day care and early childhood education. Housing and a new school are next in line for construction.

“It’s bittersweet,” Ralston said. He is glad for the progress — but grieved at the destruction. He watched last winter as waves breached the village seawall. The field he used to play on as a kid has washed away.

“All these houses are being abused and neglected, all these resources are just going to be abandoned, and torn down,” Ralston said. “My grandmother’s house, the house my mother was born in. It hurts. But it makes sense, it’s not going to last.”

As Haaland concluded her public remarks, she said she had been moved by what she saw at Taholah.

“You don’t really understand how important a place is to a community of people until you are actually there with them,” Haaland said. “I understand how important this place is.” Washington was Haaland’s first stop on a three-state swing through the West. Next she heads to California, and then Wyoming, where she is expected to discuss wildfire and alternative energy.