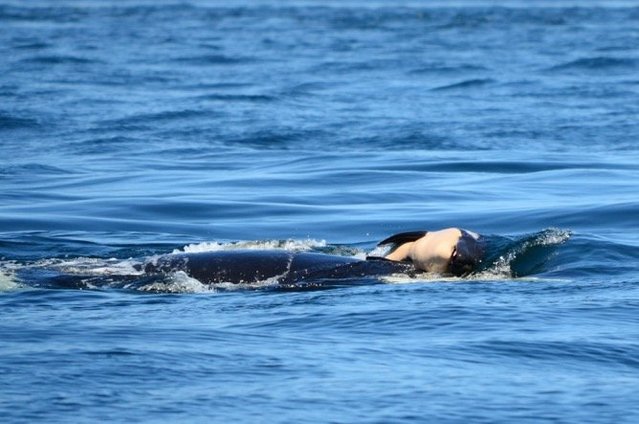 The loss of the calf reported by Ken Balcomb of the Center for Whale Research continues the reproductive failure of the southern residents, which have not managed a successful pregnancy in three years.

The calf’s mother, J35, was seen Tuesday carrying her dead calf as she swam, refusing to let her go, hour upon hour, Balcomb said. “Maybe this is her protest.

“I told the governor it was going to happen,” Balcomb said. “More and more will happen. We are losing them … The whales are not going to stand for it. They are going to pass away.”

Balcomb, a member of Gov. Jay Inslee’s task force on orca recovery said steps need to be taken immediately to get the whales more salmon — their preferred food.

Up to two-thirds of pregnancies were lost among the southern residents from 2007 to 2014. A multiyear study linked the orca population’s low reproductive success to stress due to low, or unreliable abundance of chinook salmon.

“The (southern residents) have very little reproductive potential left, and we are wasting it in a process that cannot succeed unless thinking leaves the box,” Balcomb said. “We have to call it quits or fight like hell to restore wild salmon in as many ecosystems as possible as soon as possible. Hatchery fish are catchable and edible, but not sustainable.”

On Tuesday, J35 swam as she balanced the stillborn calf on her head.

“The dead calf would occasionally slip off her (head) and sink, at which time J35 would dive down and retrieve the carcass,” he said.

Meanwhile the health of another member of the pod, J50, is also raising concern.

Brad Hanson, wildlife biologist at the Northwest Fisheries Science Center in Seattle, was alongside the whale on Saturday with a petri dish on a 20-footlong pole, collecting droplets of her breath.

Delivered weeknights, this email newsletter gives you a quick recap of the day's top stories and need-to-know news, as well as intriguing photos and topics to spark conversation as you wind down from your day. “She is very thin, there is no question about her body condition, it is very emaciated,” Hanson said. “We are very, very concerned. It is hard to say at this point what her long-term likelihood of survivorship is.”

The breath samples are intended to diagnose whether the whale is ill. Biologist Deborah Giles, research scientist for University of Washington Center for Conservation Biology and research director for the nonprofit Wild Orca, told Hanson last week that she smelled foul breath coming from the direction of the whale while out on the water collecting fecal samples from the whales for analysis of their diet.

J50 is nearly 4 years old. She was the first of the “baby boom” among the southern residents that caused so much celebration in late 2014. Of the 11 babies born between December 2014 and Jan 2016, only five are known to still be alive.

“In my opinion she is definitely not getting enough to eat,” Giles said. “It will be a miracle if she survives.”