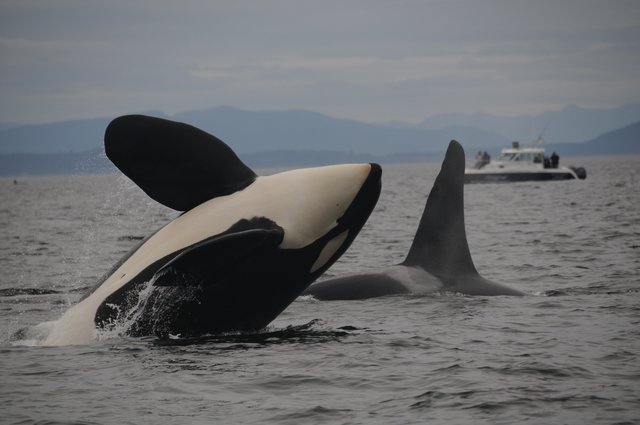 Just two males fathered more than half the calves born since 1990 to Puget Sound’s killer-whale population, and few females are giving birth in the three pods.

Just two male whales fathered more than half the calves born since 1990 in the population of southern-resident killer whales, a sign of inbreeding, scientists have learned.

“It was a shocker to find out two guys are doing all of the work,” said Ken Balcomb, director of the Center for Whale Research and an author on a paper published this week in the peer-reviewed scientific journal Animal Conservation. The findings are based on a new genetic analysis of the whales that frequent Washington’s Salish Sea and Puget Sound.

Already a small population of 76 animals, the southern residents are acting more like a population of only 20 or 30, with few animals breeding, said the lead author, Michael Ford, a conservation biologist at NOAA Fisheries Northwest Fisheries Science Center.

The paper builds on earlier work and raises new questions about whether inbreeding is another factor contributing to the southern residents’ difficulties, Ford said in an interview.
“We found kind of a hint of a suggestion that more inbred individuals survive at a lower rate,” Ford said. “But that is uncertain, and we want to understand that better, to learn if there is a negative relationship between being inbred and the probability of survival.”

Scientists discovered through DNA analysis of skin and fecal samples that just two whales, J1 and L41, are the fathers of more than half the other sampled whales born since 1990.
Unlike many other wildlife species, southern-resident killer whales don’t leave their families as they mature to find mates and new territory. They stick together for life — and even breed with family members, scientists have discovered.

“I don’t want to give the impression that it’s necessarily a cause for giving up on the population,” Ford said of inbreeding.

Staying with their family groups for life may be an advantage to the whales, allowing them to hunt together and share food.

What is most remarkable to him, Balcomb said, isn’t even the inbreeding in the population, but the cratering birthrate, and small number of breeding females among the southern residents. No babies have been born and survived in the southern residents’ J, K and L pods since 2015, Balcomb said. One J pod whale was born early in 2016, but it did not survive. Half (three of six) of the baby whales that were born in the “baby boom” in 2015 also perished. And the whales are not on track to boost productivity.

“There are really only 10 of the 27 females that are now producing calves,” Balcomb said. Those births also occur at longer intervals of one nearly every 10 years. It used to be about one every five years, Balcomb said.

Further, even assuming there are no more deaths in the pods — not likely — there are only nine young females that will mature into reproducing age in the next 10 years, while just about as many females will age out of breeding, Balcomb said.

That is the most optimistic scenario over the next decade, he said.

That trend, combined with the decline in the whales’ primary food source — chinook salmon — causes him grave concern.

“I don’t want to make it sound hopeless,” Balcomb said. “But the bad news is that with current trends in southern-resident demographics and prey resources, the situation may be unsolvable and lead to extinction.”