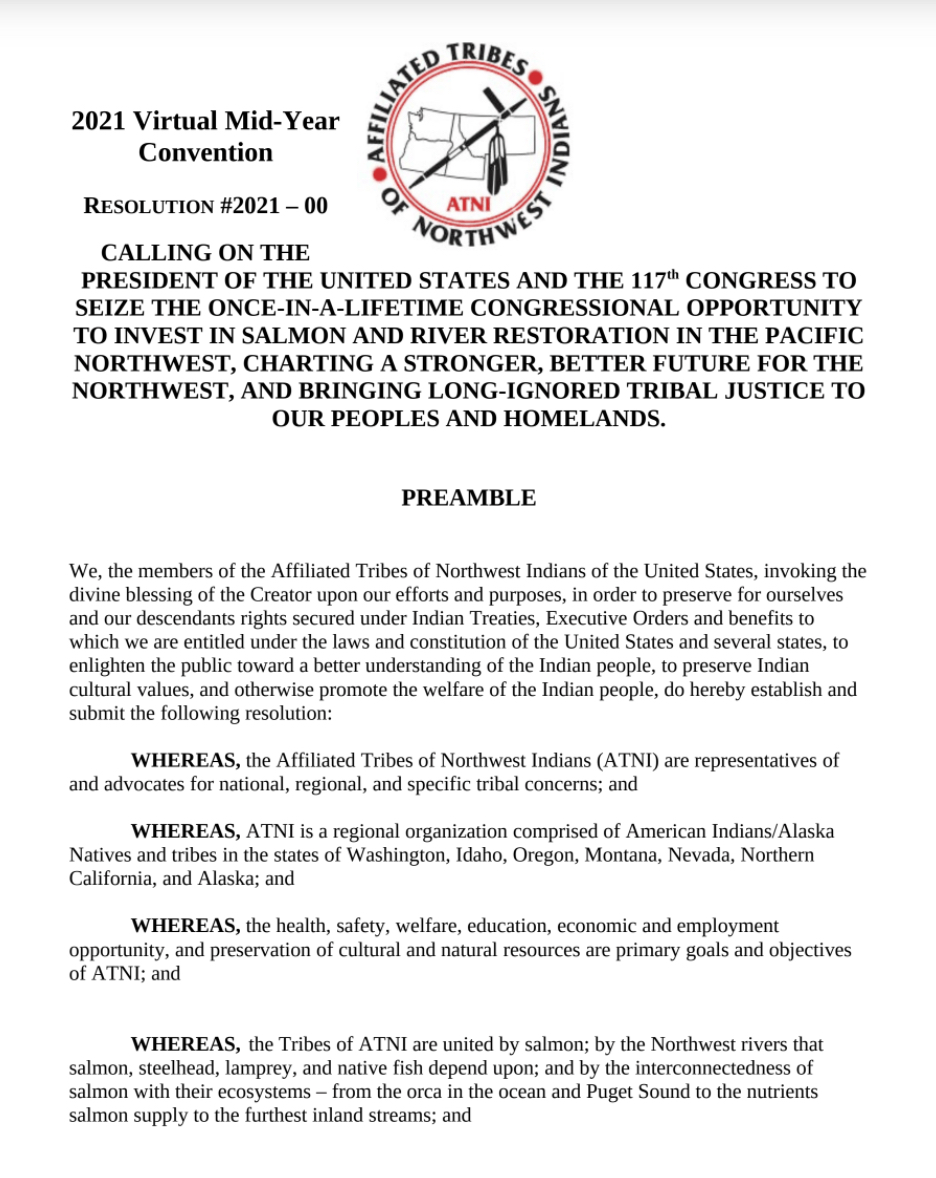 The Affiliated Tribes of Northwest Indians unanimously approved a resolution Thursday calling for breaching of the Lower Snake River dams to rebuild salmon runs, save endangered orcas and secure funding from Congress to replace the benefits of the dams.

A plan proposed by Congressman Mike Simpson, R-Idaho, to do just that was panned by key leaders in Washington state earlier this month. Sens. Patty Murray and Maria Cantwell as well as Gov. Jay Inslee — all Democrats — called for further consideration of how best to help salmon while also seeking federal funding to continue to address salmon-blocking culverts and other environmental problems.

But the Northwest tribes gathered for a convention this week blew right past their opposition, and said they not only support the Simpson plan, but they also want to convene an orca and salmon summit this summer to focus attention on the crisis facing both species.

“The Columbia River Tribes are unified and clear — we need to breach the four lower Snake River dams now, if we are to save endangered salmon runs from extinction. At today’s gathering of the Affiliated Tribes of Northwest Indians, representatives of tribes throughout the Northwest region agreed: that we need to take urgent action,” Leonard Forsman, president of the ATNI and Chairman of the Suquamish Tribe said in a statement released to The Seattle Times.

“We call on the Northwest congressional delegation and Gov. Inslee to join Idaho Rep. Simpson, Oregon Gov. (Kate) Brown, and Oregon (Rep.) Earl Blumenauer in taking urgent, nonpartisan, action to save the Snake River salmon and the regional ecosystems that depend on them,” the statement said.

In their resolution, the tribes also called on President Biden and Congress to “seize the once-in-a-lifetime opportunity to invest in salmon and river restoration in the Pacific Northwest, charting a stronger, better future for the Northwest, and bringing long-ignored tribal justice to our people and homelands.”
The resolution is expected to be signed by tribal leaders Friday.

In addition to the salmon, the southern resident orcas of Puget Sound are also sacred to many tribes, the resolution stated, and must have more food: salmon.

The Simpson proposal seeks a wide range of benefits to revive salmon, improve the energy grid, and ensure farmers, ports and others that rely on the status quo benefit from investments made for the region’s future.

Wheat farmers, ports, and shippers have issued statements opposing the Simpson plan. Washington’s GOP delegation to Congress came out against it before it was even officially released.

While the legislation to implement the Simpson proposal is yet to be written, now is the time to set aside funding for the region in an infrastructure bill the Biden Administration is crafting, the tribes stated.

Further, they called for the convening of a Northwest Tribal Salmon and Orca Summit this summer, with invitations to be extended to Biden Administration officials and Northwest Congressional members.
They, after all, are the federal trustees charged with honoring the treaties under which the tribes ceded millions of acres — in return for continuing their way of life. But that way of life is embodied in a living ecology that includes salmon and orca.

The tribes also called for the president to prioritize working on salmon and river restoration as identified in the Simpson proposal. And they called on the administration to stand down from any legal defense for a biological opinion just approved by federal agencies to continue operations of Snake and Columbia river dams.

That opinion has been challenged in court by environmentalists and tribes, continuing a long-running court battle over salmon in the Columbia Basin.

The unity expressed by the tribes in pushing forward now on behalf of salmon and orca is historic, said Shannon Wheeler, vice chairperson of the Nez Perce tribe, which has long argued for removal of the four dams on the Lower Snake.

“Tribes have not always gotten along and have even been at war against one another,” Wheeler said in an interview. “But we realize and understand a common thread between us is the salmon.

“We all understood the importance and opportunity of what is being presented now by Congressman Simpson’s proposal, and the critical juncture and timing of where salmon are, not only in the obstacles they currently face but the changing climate. We need to speak up now, and we need to speak up together.”