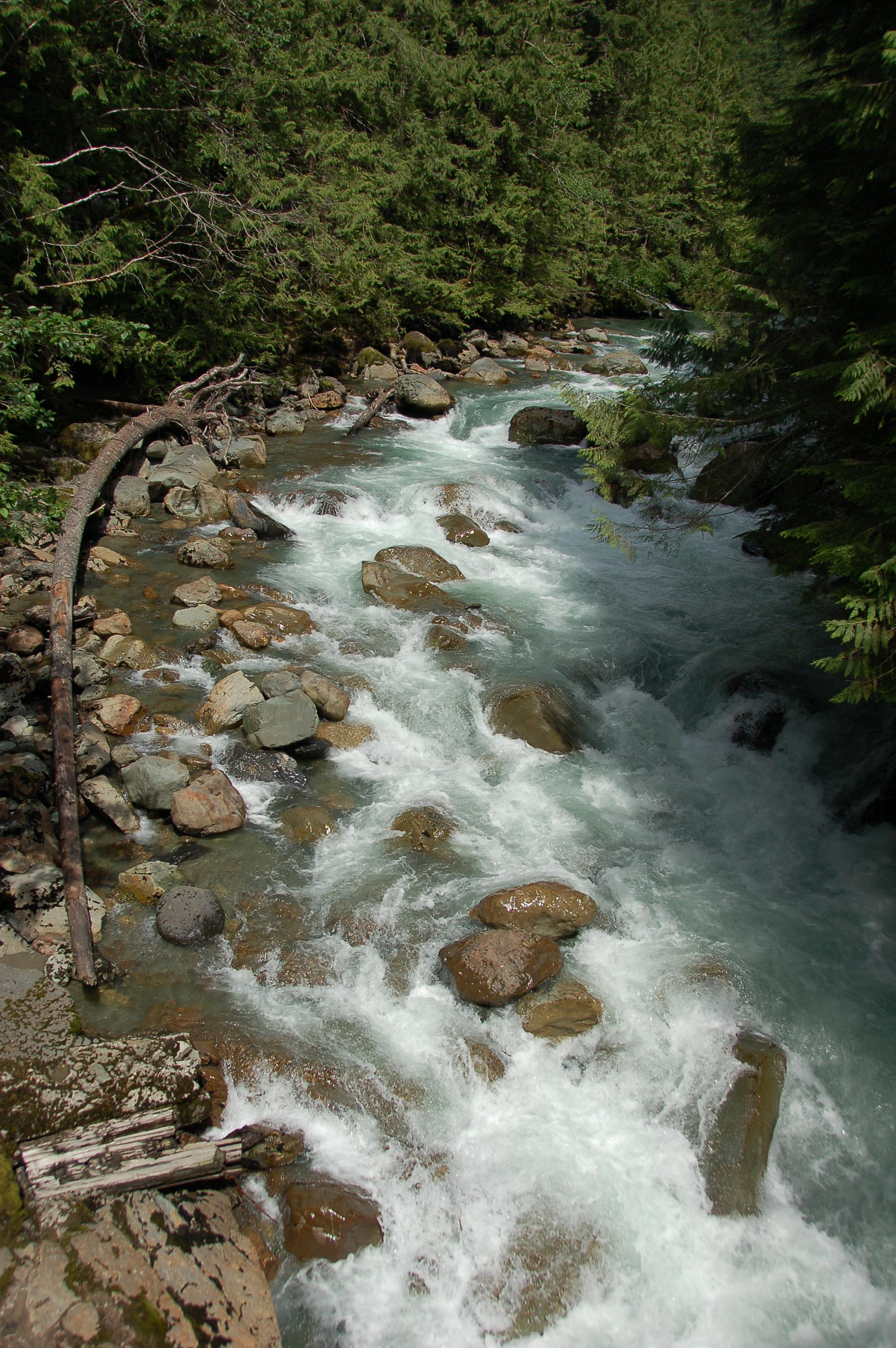 NOOKSACK RIVER — With a bang, Washington state’s dam-busting binge continued last week, as the city of Bellingham blew up its 25-foot-tall dam here.
The $17 million project will open 16 miles of habitat for fish including spring chinook important to southern resident killer whales, and is expected to be completed by September.

Removal of the Middle Fork diversion dam on the Nooksack follows detonation of the Condit on the White Salmon in 2011, the blow-up of Elwha Dam in 2012 and deconstruction of Glines Canyon Dam, completed in 2014, both on the Olympic Peninsula’s Elwha River.

The dam-removal movement has been picking up steam nationwide since the takedown of Maine’s Edwards Dam on the Kennebec River in 1999. In all, 1,722 dams have been demolished through 2019. Of those, 114 dams were in the Pacific Northwest, including 33 in Washington.

Most were small dams that had outlived their original purpose, became derelict, dangerous, couldn’t meet modern environmental standards, or were too expensive to operate, said Brian Graber, senior director of river restoration for American Rivers, which compiled the dam removal data.

Next up for detonation in Washington is a dam on the Pilchuck River, under an agreement to benefit salmon between the Tulalip Tribes and the City of Snohomish. Talks also are underway to take out Nelson Dam on the Naches River, and Barrel Springs Dam on the Samish River.

The biggest project of all is on the Klamath River in California and Oregon, where owner PacifiCorp is still working through the regulatory steps toward removal of four hydroelectric dams, said Robert Gravely, spokesman for the utility.

Not that dams are an endangered species.

There are more than 100,000 dams across the country today and more are proposed, including a dam on the Chehalis River in Washington – over the steadfast opposition of the Quinault Indian Nation.

And, of course, the region’s longest-running argument about dam removal on the Lower Snake River appears to be headed for the usual court battle as a long-awaited final environmental impact statement is published later this month. The study was ordered by a federal judge in 2016 and is the sixth go-around on the issue over the past 25 years.

But on the Nooksack, it’s a new day and another history maker. Increasingly, dam removal is the practical solution for problem dams. Often the formula is to find a way to provide the same benefits communities built the dam for in the first place, whether power generation, flood control, or water supply, but without the dam, Graber said. That, after nearly 20 years of negotiations, was the winning formula for the dam on the Middle Fork of Nooksack.

Progress years in the making

The dam on the Nooksack in many ways is not an exception but a typical case of how salmon and rivers have been sacrificed for development in the 150 years since settlers began arriving in the territory of Coast Salish people.

Like many rivers in Washington, the Nooksack has been hard-used. Its upper reaches are mostly pristine and permanently protected in park and national forest lands. But much of the rest has been heavily logged, hardened with levee walls, farmed, and otherwise altered for development.

“The Nooksack has been raped,” said Merle Jefferson, director of Natural Resources for the Lummi Nation. The river has yet to recover from heavy logging, Jefferson said, and it took the U.S. Environmental Protection Agency to clean up a dump for electrical transformers less than a mile from the river.

From 1958 until 1985, Northwest Transformer made a business of salvage and disposal of industrial equipment soused with PCBs (polychlorinated biphenyls), a persistent pollutant. The company burned the transformers in an open pit and heated its shop with PCB-laden oil burned in a space heater.

Soils at the site were permeated by PCBs to a depth of 35 feet, and groundwater polluted. A Superfund cleanup was completed at the site in 1994, according to clean-up documents.

Southern resident orcas carry PCBs in their bodies from the pollution that makes its way into the salmon they eat – and the orcas also too often go hungry. Pollution, lack of regularly available, adequate food, and vessel noise and disturbance that makes it harder to hunt are the three main threats to orca survival.

The City of Bellingham began building the diversion dam for drinking water in the late 1950s and began operations in 1961. That was before the federal Endangered Species Act or Clean Water Act existed. Before the Nooksack Tribe was federally recognized, and before a federal judge’s decision made tribes co-managers of the salmon fishery in Washington and upheld their reserved rights to salmon fisheries as promised under treaties signed with the United States.

But the requirement for fish passage has been on the books since before Washington was a state. One of the first laws passed by the state lawmakers was passed on March 10, 1893, empowered fish commissioners to seek criminal prosecution, levy fines, and if need be modify or even dynamite obstructions over any stream “where food fish are wont to ascend.”

But that doesn’t mean the state of Washington goes around slapping liens on property owners or filing lawsuits to blow up dams, culverts and other blockages, said Brendan Brokes, north Puget Sound regional director for the Washington Department of Fish and Wildlife. “That would be extremely litigious and unpopular,” Brokes said.

Many owners of dams and other passage barriers want to do the right thing but are scrounging for the money to do it. That was the story in Bellingham.

“We want to be part of the solution, but the money has to be there to make projects like this happen,” said Renee LaCroix, natural resources director for the city.

The $17 million Middle Fork project finally became a reality because of project management provided by American Rivers, paid for with funding from the Paul G. Allen Family Foundation, LaCroix said.

Getting the project shovel ready helped leverage major funding from a variety of other partners, including $10.5 million approved by the 2019 Legislature.

A new water supply intake for Bellingham will be built farther upstream. It will be screened to protect fish and is expected to better serve the city’s water needs even as weather patterns change because of climate change.

April McEwen project manager on the Nooksack for American Rivers, said she got into her line of work to shepherd restoration projects from plans to blast day. “I just love getting this done,” she said over the roar of equipment, as excavators cleared the site from the first blast and prepared for two more.

The Middle Fork of the Nooksack always has been of great importance to the Nooksack people, for hunting, gathering, and especially solitude and spiritual practice.

Both the Nooksack and Lummi tribes stopped all commercial fishing for chinook on the Nooksack decades ago, because the fish became so scarce, said Ned Currence, fisheries resource protection manager for the Nooksack Tribe.

This was the first year since the 1970s the Lummi Nation allowed fishermen to take only one fish each in a Mother’s Day fishery on chinook at the mouth of the Nooksack, for ceremonial and subsistence use, said Jefferson, of the Lummi Nation. The Lummi and Nooksack people struggle to find enough salmon and hatcheries have become critical to get any fish at all for tribal families.

Dam removal on the Nooksack is hoped to boost chinook in the river by about 30%. It’s one more step to help orcas and Puget Sound chinook survive in a region where both are losing ground.

Getting the dam out of the river also means recovery for tribal cultural values, said George Swanaset Jr., natural and cultural resources director for the Nooksack Tribe. The river was tainted spiritually by the dam, Swanaset said, because while it does not create an impoundment, the dam breaks the river’s natural flow.

Industrialization of the river threw his people’s center out of balance – a center the tribe looks forward to getting back, said Trevor Delgado, historic preservation officer for the Nooksack.

“The tribe has been waiting for this for decades,” Delgado said, as he watched the river tumble, vibrant and green, through a tight rock canyon, overhung with cedar and fir, and heavy equipment clawing at the dam.

“This is a new start of a new direction.”