Seattle Times: Lummi Nation carvers and allies to embark on national tour to D.C., give totem pole to President Biden 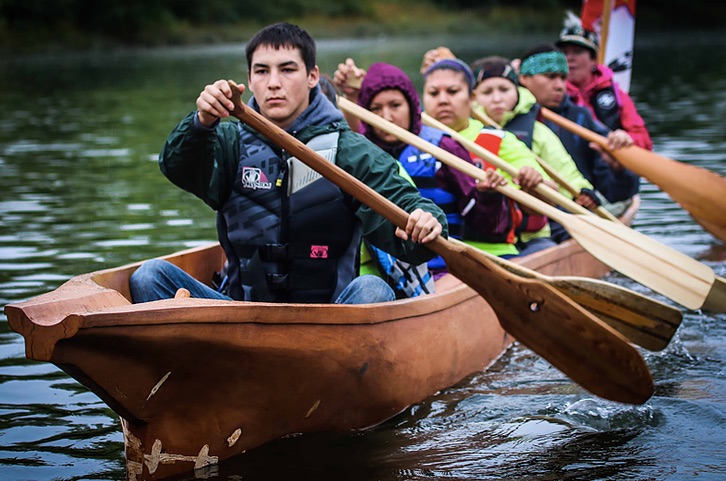 They will arrive by horseback. On foot, running from long distances. And even by canoe, to witness a spiritual journey.

It will begin at the Lummi Nation outside Bellingham next month, and continue to stops at Nez Perce traditional lands; Bears Ears National Monument in Utah; the Grand Canyon; Chaco Canyon, New Mexico; the Black Hills of South Dakota; and the Missouri River, at the crossing of the Dakota Access Pipeline, where thousands protested its construction near Native lands.

A more than 24-foot-long totem pole, carved at the Lummi Nation from a 400-year-old red cedar, will accompany the people who join this trip along the way, evoking an urgent call to protect sacred lands and waters of Indigenous people.

This totem pole journey, called the Red Road to DC, will culminate in early June in Washington, D.C. There the pole will be featured at the Smithsonian National Museum of the American Indian this fall. A special exhibition was developed by The Natural History Museum and House of Tears Carvers at the Lummi Nation, which is gifting the pole to the Biden administration.

Head carver and Lummi tribal member Jewell Praying Wolf James said he and a team of relations and beloveds, ranging in age from 4 to 70, carved the pole beginning this winter. They were buoyed by the urgency of presenting the pole to President Joe Biden as a reminder of the sacred obligation to honor the rights of Indigenous people and their sacred places, James said.

They carved the pole one figure at a time, led by spirit, inspiration and dreams, not a drawn plan, James said. The figures include everything from Chinook salmon, food of the southern resident killer whale, to the wolf, the bear, an eagle diving to Earth, and even a child in jail — a reference to children presently incarcerated at the U.S.-Mexico border. James explains each figure in this artist’s statement.

The pole opens a path to the spirit, James said. From the extinction risk to salmon and orca to the tears of seven generations, the carvings are intended to open hearts and minds into thought and prayer, James explains in a description of the symbols on the pole recorded by Lummi tribal member Freddie Lane.

The Red Road trip is the latest by the House of Tears Carvers, who for more than a decade have launched totem pole journeys to call national attention to causes, most recently, freeing southern resident orca Tokitae from captivity at the Miami Seaquarium.

This journey comes at a time of awakening and reckoning across the nation to the violence of systemic racism. Organizers and backers of the journey also hope to seize a new political moment in the Biden Administration, in which an unprecedented number of people of color, including the nation’s first Indigenous Secretary of the Interior, are serving.

“It is a magic movement moment,” said Judith LeBlanc, an enrolled member of the Caddo Nation of Oklahoma and director of the Native Organizers Alliance, a national Native training and organizing network and one of the backers of the journey. The alliance most recently was instrumental in calling out support for the confirmation of Debra Haaland as secretary of interior and getting out the vote among Native Nations during the 2020 elections.

To build on those successes, now is the time to remind the nation of its promises to the first people of these lands and waters, LeBlanc said. One of the messages of the journey, she said, is the need to adopt free, prior and informed consent of Native Nations as the principle that guides policies, regulations and agencies in the protection of sacred places. Those decisions also must be negotiated with Indigenous leaders as equals, not handed down after the fact.

The journey will begin at the Lummi Nation with a ceremony on May 25, then travel to various Western Washington tribes for blessings and prayers. Next, the carvers and their supporters will stop in Nez Perce traditional territory where Native Nations and their allies are seeking removal of four dams on the Lower Snake River to revive salmon runs at the root of Native cultural survival.

The journey, funded by a range of nonprofits and foundations, will spotlight 20 Native-led struggles across the country to protect lands, waters and wildlife imperiled by dams, climate change and development of every sort.

All along the way, in a round trip of more than 7,000 miles, the goal is to gather the hopes, prayers and support from communities to protect sacred places and the natural world, for generations to come, said Jay Julius, former chairman of the Lummi Nation and co-founder of the nonprofit Se’Si’Le, another co-convener of the journey.

At the root of the message is a return to common sense, Julius said, in an understanding that all things and all beings are connected, over the past, and into the future.

“This is about reestablishing that connection,” Julius said.