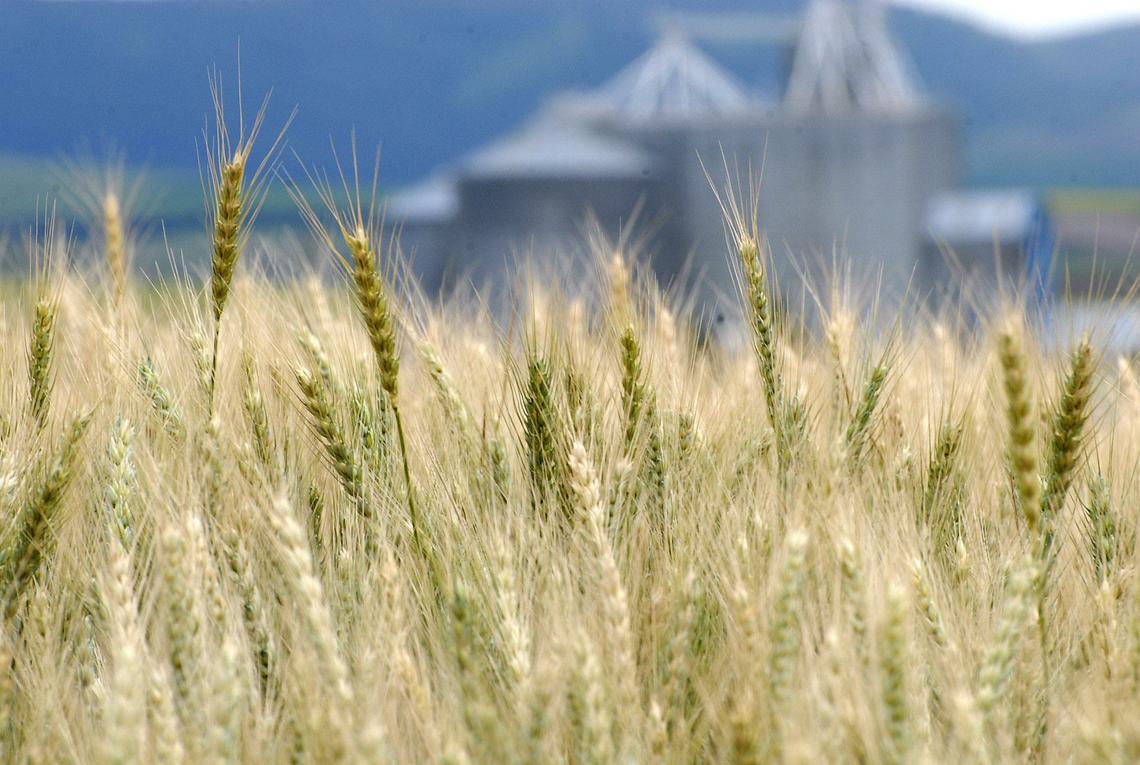 PASCO — With a steady hiss, a fog of water misted from a center-pivot irrigation machine as it crawled around a field of crops, drenching the leafy tops of potatoes reaching for summer sunshine.

It’s some of the most valuable farmland in the West, in an agricultural paradise converted from desert and sagebrush with water drawn out of pools behind hydropower dams on the Columbia and Lower Snake rivers.

While historic drought has dropped reservoirs and aquifers in California, Colorado and Oregon to historic levels, and irrigators mine groundwater and watch crops go dry, these southeast Washington farms have access to abundant water.

They also have a huge stake in the future of the four Lower Snake dams, embroiled in a dam-removal controversy for decades. It’s no abstract debate here, amid the wheat, potatoes, hay, onions, wine grapes and corn. The tumbleweeds snagged in the wire fences along thousands of irrigated acres are reminders of just how fragile an abundance this is.

So irrigators have newly engaged in the ongoing debate over dam removal as another court battle over salmon survival heats up. Farmers and irrigators on the Snake are split over the dams that sustain their businesses, with a growing chorus supporting a solution of some kind. They oppose dam removal, but they also say change is coming, and it’s time for a solution crafted with agriculture interests at the table — not by a judge in a courtroom.

What they propose is a drawdown, or lowering of water levels, in two Lower Snake reservoirs to provide more water for migrating salmon. The proposed drawdown would allow them to keep pumping water with current infrastructure and deflect change upstream.

The agricultural empire built here is entirely dependent on pipes, pumps, wells and other equipment, configured to work with a river dialed to engineered flow rates and reservoir levels. It’s a finely tuned delivery system that relies on dams that have converted two of the wildest rivers of the West to regulated reservoirs.

This water supply has allowed productivity, employment and investment to flourish.

The ground near the river is mostly frost-free — allowing producers to harvest in the most profitable weeks of the market, early and late in the season. The value of the natural gifts of this place, irrigators here will tell you, is irreplaceable.

“It’s the last firm water in the West,” said Darryll Olsen, board representative and spokesman for the Columbia-Snake River Irrigators Association in Kennewick. He counts more than 90,000 acres worth $1.5 billion in farmland watered either by direct pumping or ground water from the upper McNary Dam pool on the Columbia and the reservoir impounded by the Snake’s Ice Harbor dam.

He calls this the “impact area” if dam removal on the Lower Snake leaves irrigators’ pumps high and dry.

Oh, and don’t call them farmers.

“It’s like the difference between pilots and Navy aviators,” Olsen said. “We are not a bunch of yeoman farmers. We shot the mule. We are done with that. Forty acres and a mule?

Make that a big pump — and lots of them.

Stephen Paget, area manager of land and livestock for J.R. Simplot, was dwarfed by the size of the 68-inch diameter pipe he walked past on a maintenance check of this pumping station. This equipment moves irrigation water directly from the upper McNary reservoir, where it joins the Snake. Pumps churned and hummed, boosting the flow to 15,000 acres of potatoes and other crops.

With processors nearby in Pasco, Simplot, an international food and agriculture company based in Boise, Idaho, feeds the world, and is a regional agricultural job hub.

Simplot is just one of the operators on large commodity farms here with corporate owners from out of the state, or out of the country, growing food for processing and export.

The largest single owner irrigating from the Ice Harbor pool is the Church of Jesus Christ of Latter-day Saints, or Mormon church, in Salt Lake City. Other big owners include the Hancock Natural Resource Group, based in Boston; The Ontario Teachers’ Pension Plan, in Toronto; International Farming, based in Raleigh, North Carolina; and Nuveen Alternatives Advisors LLC, based in Champaign, Illinois, according to an analysis by American Rivers.

But whether the owner is a church, foreign investment firm or local family — there are small operators irrigating from the river, too — any significant change in dam operations is a threat.

So the irrigators association has decided to take a let’s-make-a-deal approach.

Their first proposal was to form a united front with ports and agricultural interests to seek an exemption from the federal government for river operations from Endangered Species Act requirements. That got no takers. So next, the irrigators association broke off on their own, with a proposal to draw down two upstream dam reservoirs on the Lower Snake to boost salmon survival.

The drawdown, they argued, could help fish along their downstream migration while allowing irrigators to keep pumping. It would, however, end barge transportation to Lewiston, Idaho, served by locks at the dams. Some ports would be beached. Wheat growers using the river would have to turn to trucks and rail.

To these irrigators, their latest proposal is not apostasy, but a sensible business decision to protect their investment as a federal judge once again is set to decide a lawsuit brought by the state of Oregon and other plaintiffs against the status quo in dam operations on the Columbia and Snake.

In a first round of filings, plaintiffs are calling for a change in dam operations to better protect salmon and steelhead threatened with extinction.

Dam breaching — if it comes to that — for irrigators would mean hundreds of millions of dollars in costs to extend pipes and modify pumps to keep some of the most valuable ground in Washington in agriculture.

“We have very productive soil, we have very secure sources of water and adequate water, and we are north of the 45th parallel and [in summer] have 16 hours of daylight,” said Dewey Holliday, president of the irrigators association. In his day job he manages some 7,000 acres of tree fruit crops and 13,000 acres of row crops irrigated from the Columbia and Snake owned by the Hancock Natural Resource Group, a global manager of timber and agricultural land usually on behalf of retirement funds or pensions.

Holliday said he and others in the irrigators association just want to keep farming — and fishing.

“I’ve earned my living most of my life from agriculture. I love fly-fishing for steelhead on the Grande Ronde River in Eastern Washington, and I want my grandkids to be able to do that, and I want to be sure my kids and grandkids will be able to farm, too,” Holliday said.

This was a desperate season for Washington dryland wheat growers. Farmers expect to bring in the smallest wheat crop since the 1970s, due to a punishing drought. For Michelle Hennings, who grew up in Ritzville, Adams County, and grows wheat on her family’s ranch, the ongoing debate over the dams is just one more uncertainty growers face, along with weather and markets.

Hennings, executive director of the Washington Association of Wheat Growers, said ending barge transportation to Lewiston would be a gut punch for wheat growers who use the river to get their crop to market.

She doesn’t appreciate the irrigators association peeling off to fight for themselves.

“We need to stick together,” Hennings said. “I am confused, disappointed and frustrated.”

Like Hennings, Glen Squires, CEO of the Washington Grain Commission, said what’s needed is a regional solution that looks at all the challenges facing salmon, instead of fixating on the four Lower Snake dams.

He noted that Seattle Public Utilities, just for instance, could take a lesson from the U.S. Corps of Engineers, which unlike the Seattle utility provides fish passage at its dams on the Columbia and Snake. As much as 97% of salmon survive passage at each dam, he noted.

There are eight hydropower dams on the main stem Columbia and Snake. And even in the best-case scenario, that only 3% of juvenile salmon are killed at each of the dams, that’s nearly a quarter of every year’s migration. Then there’s the toll taken by slow-moving reservoirs that heat to lethal temperatures for weeks at a time in summer. Or the still unquantified factor of “delayed mortality” — salmon that die because of stress or other factors due to the hydropower system, even though they make it past the dams alive.

Salmon returning to the Snake Basin have it the worst. Most of the spring and summer Chinook runs are nearly extinct. Adult steelhead returns are at their lowest this migration season since 1943.

Dam opponents, including tribes, are more united and determined than ever. For the first time, tribes from the interior of Idaho all the way to saltwater have come together to support breaching the Lower Snake dams to boost salmon survival.

They were galvanized in part by Congressman Mike Simpson, a Republican from Idaho, and his proposal to put billions of dollars into replacing the benefits of the dams, and breaching them to save salmon.

Simpson’s proposal has not gained the traction he hoped in an infrastructure bill moving through Congress. But it isn’t dead, either.

Washington’s senior senator, Democrat Patty Murray, has joined with Washington Gov. Jay Inslee in calling for a new look at salmon recovery in the Columbia Basin that keeps all options on the table, including dam removal.

“I think there is zero probability of nothing happening,” Olsen said.

Wheat growers, ports and others “have their heads stuck in the sand,” he said. “We are not going to PR our way out of this.”

Katie Nelson would really rather grow wine grapes and cherries at her family’s place than talk about dams. Her father, Jeff Gordon, transformed the sagebrush ground he purchased in 1978 into an estate vineyard that today is home to some of the oldest vines in the state. The family owns and manages 260 acres, including 15 acres of cherries, 85 acres of alfalfa and 105 acres of grapes — all of it irrigated from the Snake.

Nelson is no fan of removing the dams. But she grew up with the debate, it’s been going on so long. So in a way, she hands it to Simpson and his pitch.

“I admire that someone put something fairly comprehensive on the table,” Nelson said. “No one else did.”

She and her husband, Marc, are managing the farm, and built their house not far from her dad’s. There’s even a pen for the pigs her son is raising for 4-H, a rare pigpen with a riverfront view.

Midsummer brought bins of sweet cherries. The grapes on the vines were fattening on sunshine, good ground and water, gaining the right flavor balance, the gift of hot sunny days and cool nights just right for a vineyard.

“We’ve got the right crop, the right place and the right water. Right here,” Nelson said, with a sweep of her hand to vines heavy with fruit, overlooking the Snake.

The value of her family’s land is based on the availability of water, Nelson said. And theirs is an estate vineyard, meaning the wine they make must be made from grapes grown on their land.

By now, Nelson said, she’s ready for a solution, and tired of all the drama.

“Nothing frustrates me more than when people dig in their heels and aren’t willing to hammer something out.

“Can we just come up with a solution, so we don’t have to talk about this forever?”