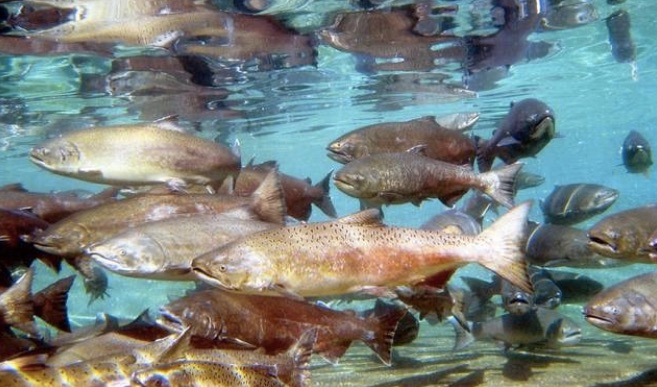 Breaching the four Lower Snake River dams is not an option yet, Washington Gov. Jay Inslee and U.S. Sen. Patty Murray, D-Wash., said Thursday in a statement outlining the findings of a joint report on dam removal and salmon recovery.

Their announcement comes after the Biden administration weighed in on the issue last month, giving proponents hope that a swift resolution was on the horizon. Washington relies heavily on hydroelectric power generated through dams, but the impacts they have on salmon, orcas and tribal fishing grounds have become impossible to ignore, thanks to drought, heat waves, reduced snowpack and other facets of climate change felt in recent years.

But dam removal in any capacity would reduce the state’s portfolio of renewable energy amid ambitious efforts to transition away from fossil fuels by 2050.

At the moment, dam removal isn’t entirely a partisan issue.

Removing federal dams requires congressional approval. Murray said she will not support an immediate push in Congress because it lacks bipartisan support, and not all Democrats are guaranteed to vote for it.

“It’s clear that breach is not an option right now — while many mitigation measures exist, many require further analysis or are not possible to implement in the near-term,” Murray said in a statement.

“We are adamant that, in any circumstance where the Lower Snake River Dams would be breached, the replacement and mitigation of their benefits must be pursued before decommissioning and breaching,” the joint statement said Thursday.

In June, a draft report commissioned by Inslee and Murray estimated it would cost between $10.3 billion and $27.2 billion to replace the collective benefits for energy, irrigation and recreation provided by the four Lower Snake River dams.

While the report did not take a position on whether the hydroelectric dams should be removed, it found that breaching the dams will offer the best chance for salmon runs to recover in the Columbia and Lower Snake rivers, and for honoring tribal rights promised by the federal government.

“The release of the Murray-Inslee proposal is the next step in the right direction to save these sacred species,” said Samuel Penney, chairman of the Nez Perce Tribe, which has spent decades pushing for dam removal.

The White House took an unexpected step by weighing in on the issue in July when it released two reports in support of dam removal, citing the importance of salmon recovery and the feasibility of finding a replacement for the lost energy.

Another study commissioned by the Bonneville Power Administration and released in July indicated that using power produced from controversial natural-gas turbines to replace some of the low-cost hydropower would be a substantially cheaper option. It could also be implemented faster than pursuing other renewable sources or expanding nuclear power production.

But in Washington, such a move would likely require changes to a state law that calls for a phaseout of all fossil-fuel power production that releases carbon emissions. The state’s attorney general this week also joined Oregon and California in a legal challenge to the proposed expansion of a natural-gas pipeline project.

“I believe that we can have, and we will have, both the requirement of adequate clean power and saving the salmon from extinction,” Inslee said.

Inslee said the planning for replacement power needs to start now, but he does not think it is “useful” to put a timeline on breaching the dams.

Inslee was also hopeful the federal government could help shoulder the costs of breaching, which he said was “clearly, scientifically the best option to avoid extinction.”

For decades, dam removal has been opposed by a long list of public utilities, ports and other users that benefit from the river and the electricity it generates.

“The Murray-Inslee conclusion reflects what we have been saying, that losing the dams would increase rates, risk blackouts and harm our ability to fulfill clean energy laws, and it looks like Sen. Murray and Gov. Inslee listened to the experts and the public who had big concerns over losing the dams,” said Kurt Miller, executive director of Northwest River Partners, a coalition of utilities across the Pacific Northwest that rely on hydroelectric power.

Four dams were built on the Lower Snake River — the Columbia River’s largest tributary — the last completed in 1975. Across the basin, 31 dams, operated by the federal Bureau of Reclamation and the U.S. Army Corps of Engineers, generate a third of the region’s power.

That power propelled industrial growth, but it came at a price.

“Sen. Murray and Gov. Inslee have clearly stated we should move forward with a plan to replace the benefits of [the Lower Snake River dams] and implement a new comprehensive approach to protect and recover salmon and steelhead populations facing extinction today,” said Joseph Bogaard, executive director of the Save Our Wild Salmon coalition, which includes the Sierra Club, Earthjustice, the Natural Resources Defense Council, the Idaho Conservation League and American Rivers.

In the Columbia and Snake rivers, salmon and steelhead populations have declined by more than 90% since the dams were constructed. Research says the dams are partly to blame, but climate change, recreation and development are also factors.

“The loss of the dams would still devastate our communities: Prices would rise, crops would perish, jobs would be eliminated, and the environment would be threatened,” U.S. Rep. Dan Newhouse, R-Wash., said in a statement.

Newhouse represents much of Central Washington, including Yakima and the Tri-Cities, where local economies rely on agriculture and shipping. “We should be focusing time and money towards more support for salmon recovery and habitat restoration efforts.”