Seattle Times: For the First Time in 20 Years, Feds Take a Deep Look at Hydroelectric Dam Removal on the Lower Snake River 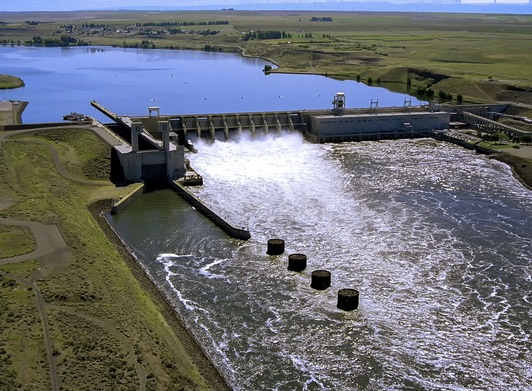 The futures of hydropower, salmon and orcas in the Pacific Northwest are at stake in the first assessment in 20 years of the environmental effects of dams on the Columbia and Snake rivers.

Federal agencies are set to release a draft environmental impact statement (EIS) of dam operations on Friday, opening a 45-day public comment period. On the table will be a range of alternatives for operation of 14 dams in the federal Columbia River hydropower system, including a preferred alternative.

The review was required by a federal judge in 2016, and must, among other things, assess dam removal on the Lower Snake.

It’s the first new look at river operations across the entire Columbia Basin since new challenges have emerged for endangered species and the region’s power grid.

A warming climate has made both ocean conditions and the freshwater river environment tougher for salmon. Another endangered species has also been listed since the last EIS: the endangered southern resident orcas that frequent Puget Sound.

The Bonneville Power Administration, which sells power from the dams, is struggling to maintain financial stability and remain competitive in changing Western energy markets. Years of surging expenses have led the agency to raise rates it charges the region’s utilities, which pass higher costs on to ratepayers.

Southern residents rely on salmon from the Columbia and Snake rivers as a critical food source, and were listed as endangered in 2005. They are headed to extinction in part because they do not regularly get enough salmon to eat. Orca and salmon scientists in a letter to the region’s governors and congressional delegation on Feb. 20 said a review of the science shows dam removal is the best chance for recovering Columbia and Snake salmon.

The four Lower Snake River dams were the last dams built in the federal Columbia hydropower system. Completed in the 1970s, they together provide about 5% of the region’s electricity, enough to power a city about the size of Seattle.

Growers also draw water from behind one of the dams to water some of the largest orchards and vineyards in the Northwest. In addition, locks built at the dams extend a navigable waterway all the way to Lewiston, Idaho, 465 miles from the Pacific Ocean. Barge transportation via the waterway is more efficient and less polluting that trucks or rail.

Most flood control is provided by the large storage dams in the Upper Columbia on both sides of the U.S.-Canada border and in Idaho.

The stakes are high as the region considers the best options for dam operations. For the first time in recent years, the possibility of power shortages has developed as coal plants have unplugged. Managing the surge of wind and solar power on the grid today relies on hydropower dams like the ones on the Columbia and Snake rivers to quickly balance delivery of energy through the system as demand fluctuates. To fight climate change, the region also is looking for more carbon-free energy sources, not fewer.

In its review of the last EIS in 2000, the National Oceanic and Atmospheric Administration called breaching the four dams on the Lower Snake the most reliable path toward salmon recovery and survival. The agency is in charge of both salmon and orca recovery.

“By reducing the effects of one type of human activity, breaching the four Lower Snake River dams would provide more certainty of long-term survival and recovery than would other measures,” the agency found — but stopped short of requiring breaching.

More than a dozen salmon runs remain at risk of extinction since then; not a single run has recovered. The region is facing another poor chinook season this year after a string of better years, especially 2015, that raised hopes. Long term, recovery rates have remained far below recommended targets to beat extinction. The population of  southern resident orcas has declined to 72 whales.

This EIS marks the sixth time federal agencies will try to come up with an operations plan that meets the requirements of the Endangered Species Act to protect salmon. Each time in the past, the state of Oregon, the Nez Perce Tribe and multiple fishing and conservation interests have won legal challenges to the agencies’ plans.

Some are ready for a new approach.

“There is a fundamental question of whether the EIS can deliver the kind of broader solution the region needs,” said Todd True, an attorney with Earthjustice who represents plaintiffs in the long-running court battle to save Columbia and Snake salmon. People across the region are going to have to dig in and problem solve, True said. “At this point, multiple paths are needed and it will take some political leadership to forge a package that will get people on board.”

Oregon Gov. Kate Brown said in a letter to Washington Gov. Jay Inslee on Feb. 11 that dam removal on the Lower Snake would be the best boost for salmon in the river to provide more food for orcas. She also called for a process to determine solutions to minimize economic harm from changes in dam operations.

Even that mild letter brought sharp disagreement from river users.

Kurt Miller of Northwest River Partners, which represents ports, utilities, industries, shippers and other dam users, said it’s time to agree to disagree about the dams and move on to other solutions.

His group is looking to partner wherever there is common ground, Miller said, but dam removal is a non-starter.

“We are very clear that we believe the Lower Snake River dams are essential to the region achieving its clean-energy goals in a fair and equitable way,” he said. “We believe there are other ways to help salmon without removing this critical infrastructure.”

Changes intended to benefit salmon have already been made in the hydropower system since the last EIS, including hundreds of millions of dollars worth of retrofits to the dams to help fish passage. A big change in river operations also was initiated last year in a so-called flexible spill agreement, intended to help salmon while keeping dams in place and boosting power revenues.