Seattle Times: Both orca babies are alive, and all 3 southern resident pods have been spotted in Canadian waters 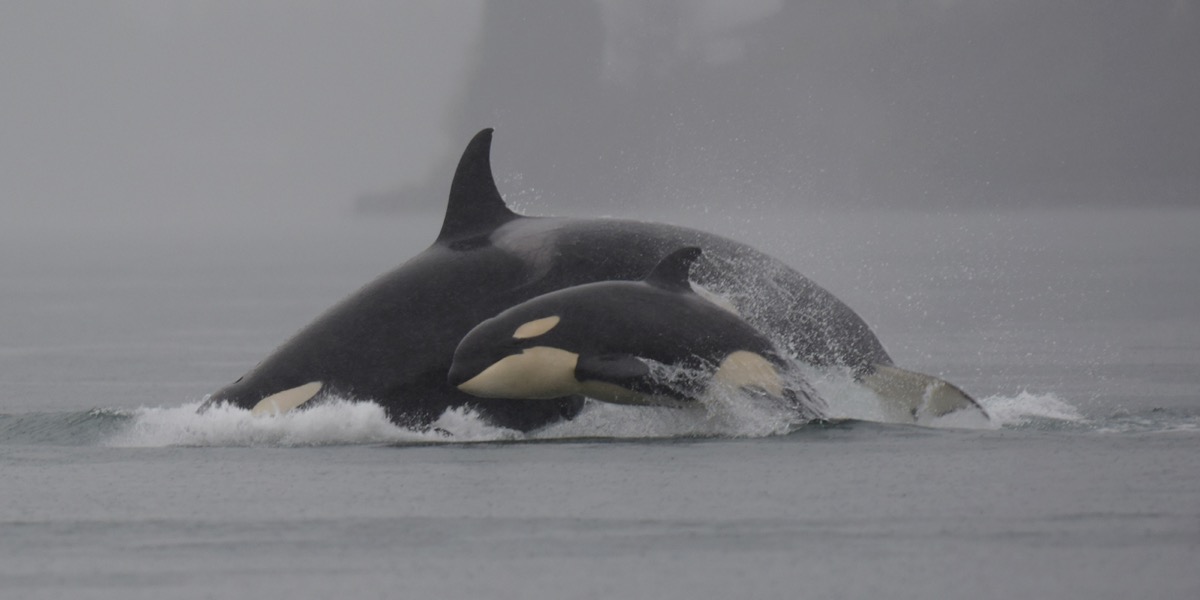 Researchers documented this week that both babies in the southern resident killer whale pods are still alive.

That was welcome news for the population of endangered orcas that dropped to just 73 this month, with three adults missing and presumed dead: J17, K25 and L84. The southern resident population has been in steady decline and is the lowest since the end of the live capture era in Washington waters in 1976.

On Sunday, researchers with the Center for Whale Research, which tracks the southern resident population, photographed both babies, alive and seemingly well.

Orca calves have a 50 percent chance of surviving their first year of life in the best of circumstances. So the persistence of the babies — J31’s new calf, J56, and L124, the calf born to L77 in January — is encouraging.

Researchers have confirmed J56 is female. The gender of L124 is not yet known.

In addition to the sighting near Clo-oose on the west side of Vancouver Island on Sunday, J pod was seen in the Strait of Juan de Fuca Tuesday, Ken Balcomb founding director of the Center for Whale Research, reported Wednesday morning in a text to The Seattle Times. The whales were headed inbound from Sooke, B.C., Wednesday night.

The hour-to-hour location of the whales is of fierce interest to whale researchers waiting all summer to do their work, and hoping the southern residents will arrive to follow fall runs of chinook salmon to the Fraser River.

Spring and summer runs have been so low the whales have not bothered to come around. The whales have been on the outer coast all summer, including an unprecedented two-month absence from their summer habitat in the inner Salish Sea, including the San Juan Islands.

Sarah Colosimo is the lead of a four-person research team for Oceans Initiative seeking to document how the southern residents are influenced by the presence of boats.

Since July 1, the team has been surveying for the whales from the west side of San Juan Island, watching from land all day. The whales have shown up only twice, on July 5 and 6, and only briefly. The whales made a fast shuffle up and down the island, then left.

Days go by, as the team waits for them to come back. Their equipment is ready. Their protocol perfected. All they need is their study subject to show up.

Undaunted, the team will keep at it through September, Colosimo said, watching for the whales from shore.

The study, begun in 2017, has been helping to shed light on the behavior of the whales in the presence of ships and boats. Whales use sound to hunt, and noise by ships and boats blocks what they need to hear.

A report from the Port of Vancouver last month on the effect of voluntary slowdowns in 2018 by shippers in Haro Strait found that slower speeds lower boat noise, and help reduce interference by shippers with whale foraging.

The report also found that as underwater noise increases, there is a decrease in the probability that the whales will start foraging, and an increase in the likelihood that they would stop.

Other peer-reviewed, published research has shown that even the presence of boats can cause orcas to stop foraging and travel. That matters for an endangered species that is struggling to get enough to eat.

The absence of the whales most of the field season so far this year is bittersweet, Colosimo said.

“Everyone that is working on this project is really passionate about the whales and invested in their well-being. It brings us some comfort to know they must be somewhere where it is quieter and less polluted, with more fish,” Colosimo said.

“Maybe this is hopeful, that that they have figured out this isn’t the best place for them, and they have found somewhere better.”