from the desk of Pat Ford, SOS executive director 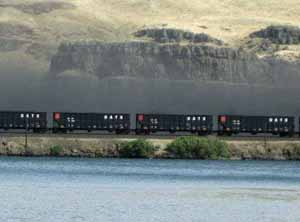 Coal dust photo from a kayaker on the Columbia River, via CRITFCThis blog is particularly addressed to SOS members and advocates for salmon.  It concerns action on which I would like your perspective.

Water temperatures so warm are terrible for salmon, especially when sustained over many days and in long stretches of a river or reservoir.

This is not just a 2012 problem that ends now that summer is ending; it is a trend certain to get worse.  We can expect summer water temperatures at some Columbia and Snake dams to hit 75 degrees in the near future – first a few times, then more, then routinely.  Think about the damage this will do to salmon.  (As well as to you and your family, who also depend on the health of our common waters.)

At the same time Columbia temperatures have reached this danger zone, plans to ship coal on and along the Columbia River, from inland mines for export to Pacific Rim markets, are proliferating.  Proponents argue jobs, and ask: “if it’s going to happen anyway, why not here?”  Opponents argue local health, safety, and pollution concerns, and jobs threatened, and ask: “why should Northwest people further stoke the fire now cooking our air and water, lands, and towns?”

Last month the National Wildlife Federation and Association of Northwest Steelheaders, both in our coalition, issued a report detailing the harm large-scale coal export will cause salmon. Some harm is direct from the transport itself, but most deadly over time is the ubiquitous, inexorable heating of salmon waters to which the burning of coal globally is a top contributor.

Salmon advocates could once focus our work on salmon habitats and the salmon-affecting actions of people in a given watershed(s).  No longer.  The effects of global warming, if not slowed then stopped, will destroy salmon and salmon resources as we know them.  The “someone else will ship it via somewhere else if we don’t” argument is probably true right now.  But if we are to rein in climate chaos, it can’t stay true.  Northwest people have a tradition, and duty, of leadership on national and global imperatives, and we have urgent self-interest too, of which salmon is part.

So later this month I will ask the Save Our wild Salmon board of directors to oppose use of the Columbia and Snake Rivers to further or facilitate coal exports through the Northwest.  I may go further, to oppose use of our region’s roads, rails or waterways to do so.  I am working on the wording now, and welcome thoughts from anyone in our coalition or others who care about salmon.

Many other SOS members are working on this issue – Sierra Club, Columbia Riverkeeper, and Earthjustice are examples. Earth Ministry is another.  Whether and how SOS makes assisting that alliance part of our work priorities is a separate issue we will address if the board adopts a resolution.

SOS recognizes there are many who support coal exports through the Northwest.  Some are people and companies SOS has or hopes to work with, including unions and railroads.  An SOS board resolution along the lines above will not end our commitment to dialogue that seeks win/win solutions on this and other issues of salmon, transportation and energy.  But go back to my first paragraph.  SOS cannot ignore the reality in the Columbia and Snake Rivers.  Steadily rising water temperatures are a disaster for salmon we must try to stop.  This action will not come from Washington D.C.  We must find our own, and by so doing help or inspire others in other regions to follow.