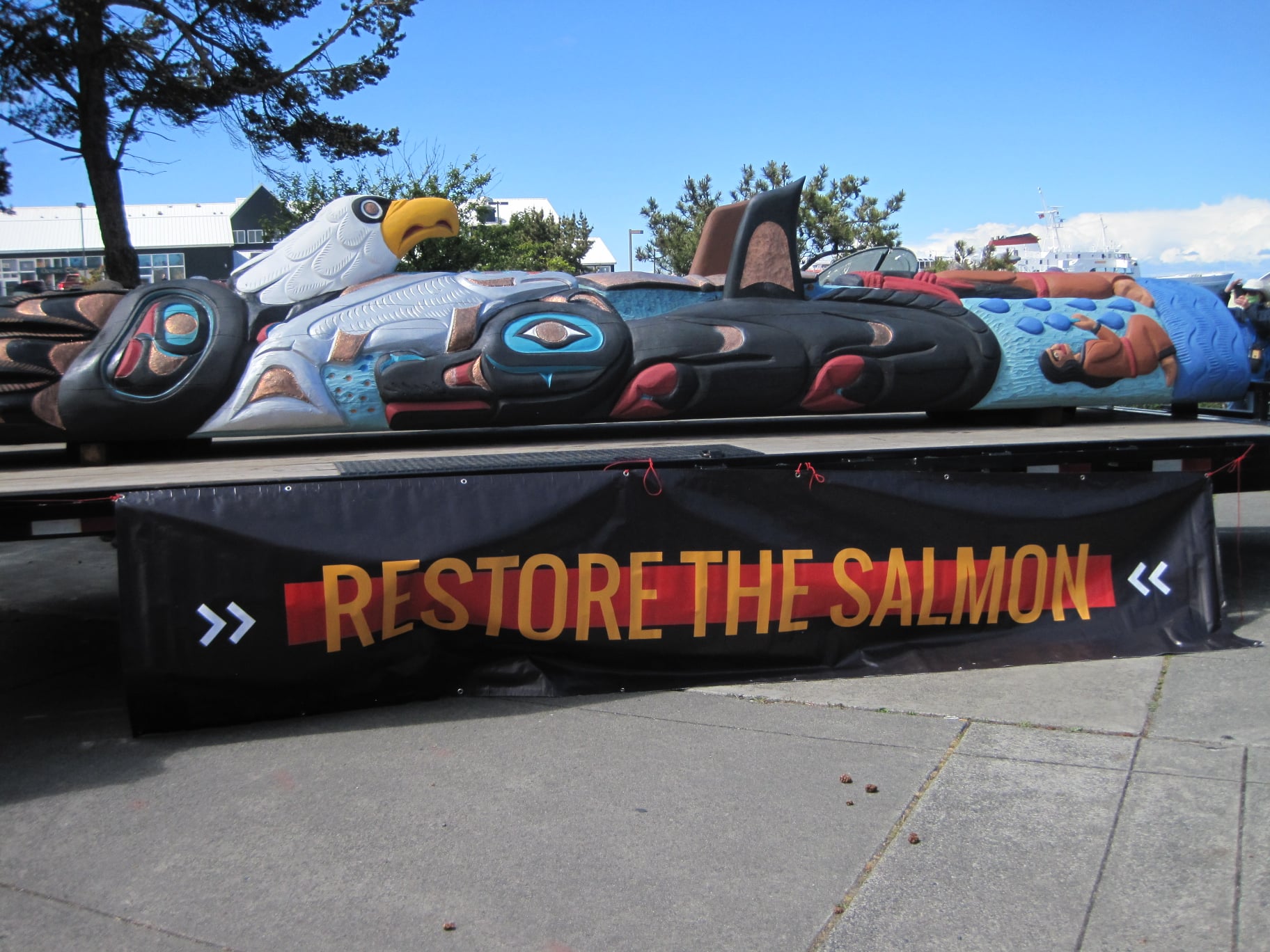 Washington, DC – Tribal leaders and Native American grassroots activists today delivered a totem pole honoring sacred Indigenous sites to Washington, DC, to the Biden administration. In an event on the National Mall, the totem pole was welcomed by Secretary of the Interior, Deb Haaland; President Biden’s Chair of the Council on Environmental Quality, Brenda Mallory; and PaaWee Rivera (Pojoaque Pueblo), Senior Advisor for Intergovernmental Affairs and Director of Tribal Affairs at the White House.

Tour organizers were also joined at the final stop of the Red Road to DC, a cross-country tour highlighting Indigenous sacred sites at risk, by tribal leaders from across the country.

Leaders and activists brought the totem pole carved by the House of Tears Carvers of Lummi Nation to places sacred to Native peoples that are at risk from infrastructure projects and resource extraction. A permanent location for the totem pole will be announced at a later date.

“The totem pole holds the prayers of all who blessed it along its journey to DC,” said Jewell James, a member of the Lummi Nation and master carver at House of Tears Carvers. “Across Indian Country, our places where we pray, gather food and medicine, and hold our ceremonies, are being threatened by the greed and carelessness of corporations. We wanted to bring attention to this crisis.”

“Native people must have a seat at the decision-making table if we are to see real change happen,” said Judith LeBlanc (Caddo), executive director of Native Organizers Alliance, one of the tour hosts. “We need a system of consultation that engages our tribal nations and gains their consent at every stage of projects that impact the wellbeing of our land, water and communities.”

“When the federal government considers any action that impacts tribal communities, the United States must acknowledge and recognize the political standing and equality of Tribal Nations to be at the table and heard in good faith government-to-government negotiations," said Sharp. “We possess the inherent right as sovereign nations to speak decisively in all matters which affect our citizens and lands before any action by the United States is taken. Free, prior, and informed consent must be the governing policy for all federal agencies.”

Leaders say the absence of this policy has not only threatened sacred places, but exacerbated the climate crisis.

“It is time for the United States to honor treaties with sovereign Tribal Nations,” said Whitney Gravelle, president of the Bay Mills Indian Community in Michigan. “For too long tribal concerns have been brushed aside in favor of companies like Enbridge Energy [Line 5] that have abysmal track records not only where the environment is concerned, but also for violating, threatening, and harming long-standing treaty-protected rights and treaty-protected resources. Enough is enough. As my ancestors long before have taught my people, if we do not protect the land and water, we risk destroying a way of life for our people and we risk destroying the heart of Turtle Island [North America].”

Dozens of speakers on the National Mall, representing tribes across the nation, shared a similar sentiment. They called on the Biden administration to take immediate action to protect Indigenous sacred sites.

“The places where our ancestors once walked, fished, and prayed is what sustains us as Native people,” said Daniel Tso, member of the Navajo Nation Tribal Council. “But oil and gas companies look at our land like it’s there for the taking. It’s just Indian land, not anything important. But this is our way of life. And until the federal government changes how it does business, you will keep seeing gatherings and rallies like this one today. We have an obligation to defend this sacred landscape and we won’t stop until it’s protected.”