Q13 Fox: Trump speeds up environmental review of Columbia River system and its effects on salmon 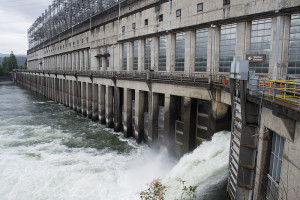 SEATTLE — President Donald Trump on Friday ordered the government to speed up environmental reviews and streamline regulations that he says are hindering work on major water projects in the Western United States.

The signed memorandum affects the timeline of a court-mandated review of the environmental impacts of the Federal Columbia River Power System.

The Columbia and Snake rivers are home to 13 species of fish listed under the Endangered Species Act.

A federal judge initially ordered three agencies to complete an environmental impact statement of the federal dams in the Columbia Basin by 2021. President Trump has moved up the deadline to 2020 and is ordering agencies to submit a new schedule of completion within 60 days.

The White House said the presidential direction is aimed at "reducing regulatory burdens that harm reliable water access in the West."

Other impacted projects include the Central Valley Project and the California State Water Project in California, and the Klamath Irrigation Project in Oregon.

In the Columbia-Snake River System, eight federal dams generate hydropower and serve as a barge system for wheat and grain export from Lewiston, Idaho, to Portland, Oregon.

The environmental review process is currently estimated to cost $81 million, according to the U.S. Army Corps of Engineers.

It is also creating uncertainty in the region as agencies debate the future of four dams on the lower Snake River.

A federal judge demanded the federal agencies consider breaching the dams to recover threatened salmon and steelhead populations. Salmon scientists have been advocating for this action for decades. Orca champions have echoed their calls in recent years as the endangered southern resident killer whale population continues to decline.

The critically-endangered orcas, who are suffering from a lack of prey, rely primarily on chinook salmon for their diet.

This summer, NOAA Fisheries ranked the priority chinook stocks for the orcas. Two of the top 10 stocks are from the Snake River. Another three stocks come from the Columbia. The dams are still impacting fish survival, despite billions of dollars spent improving the system.

The governor's orca task force is considering recommendations related to breaching the four Snake River dams. More than 600,000 people have signed a petition supporting that action on Change.org.

Meanwhile, Eastern Washington is fighting to keep the dams in place. Republicans in the region are celebrating the president's action to accelerate the timeline on the federal review.

“Moving up the deadline for the EIS is a procedural win that will give more certainty to the communities whose livelihoods depend on effective operations of our dams,” said Rep. Dan Newhouse, WA-04.

Save Our Wild Salmon executive director Joseph Bogaard reacted to the memorandum Friday, calling it "pure politics three weeks ahead of the election in hopes of helping vulnerable Congressional Republicans."

"What the people here need most is a thorough, honest study of salmon recovery options in the Columbia and Snake Rivers," Bogaard said. "This politically-driven announcement only kicks

up dust and undermines this effort."

While the announcement does affect the state of Washington, it will serve as an even bigger boost for endangered Republican lawmakers in California's Central Valley, who are facing tough challenges from Democrats in a race to take control of the House.

Many Democrats in the area have outraised their incumbent Republican opponents ahead of the midterm election.