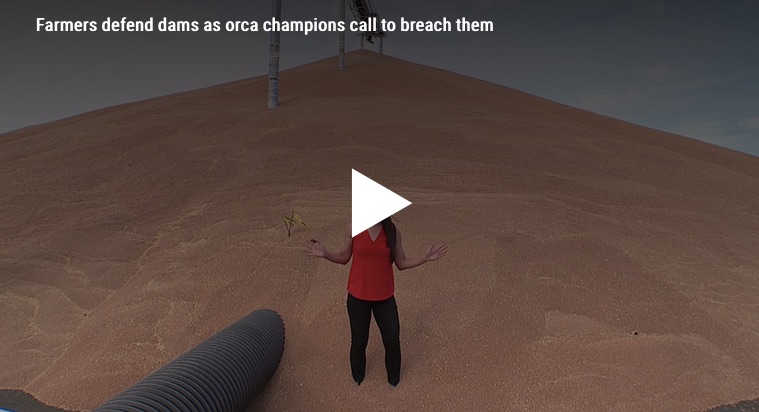 NEAR TRI-CITIES, Wash. -- Despite many improvements, the four dams along the lower Snake River in Eastern Washington still threaten the survival of endangered salmon that the critically endangered orcas eat.

Salmon advocates believe the only solution left is to breach the dams. It is one of the most controversial actions being considered by Gov. Jay Inslee's southern resident killer whale task force.

But in Eastern Washington, the agricultural community told Q13 correspondent Simone Del Rosario that losing the dams would threaten their livelihood. They use the dammed river to transport wheat on barges.

In Paterson, Del Rosario met with Nicole Berg, a fourth generation farmer. Berg Farms has 21,000 acres and grows wheat, bluegrass, sweet corn and more. Along with being ingrained in the local farming community, Berg also serves on the board of the National Association of Wheat Growers, a lobbying group.

"We feed the world in the Pacific Northwest," Berg said.

How breaching the Snake River dams would impact irrigation in Eastern Washington:

Many wheat farmers near the river rely on the river barge system to get their product to market.

Farmers pay for the transportation costs, from trucking wheat to a grain elevator on the river to barging it down the river to Portland, Oregon.

"We have some of the least expensive transportation costs in the United States," Berg said. "It’s 40 cents for me to get my wheat to Portland."

Berg said she takes her wheat to a grain elevator on the Snake River. Del Rosario visited one 45 miles away in Pasco called Tri-Cities Grain and met with Randall Ward, a grain merchandiser.

Grain merchandisers buy the wheat directly from farmers and load it up on barges to head down the river for export. The wheat they buy is grown in multiple states.

"We'll take wheat from farmers in northeast Oregon, south Idaho, sometimes as far away as Montana and then all the way up Highway 2 in Washington," Ward said.

Barging is possible because of the Columbia-Snake River System, a 465-mile river highway connecting Lewiston, Idaho, to the ocean. Eight federal dams have turned these rivers into a series of reservoirs to allow for transportation. Four of those dams are on the lower Snake River.

As of 2016, roughly 9 percent of U.S. wheat exports barged through the Snake. It's a system that is now facing uncertainty with growing calls to breach the dams.

One side of the story

"I do think the people that are like, 'Dam, dam, dam, dam, let’s take them down,' I’m not sure, are you listening or are you wanting to listen to the science or both sides of the story?" Berg said.

On this side of the story, in and around Tri-Cities, people see these dams as their economic lifeblood.

"The dams have provided so many things that have allowed this area to grow and develop, to provide food for not only those in this area but people around the country and around the world," he said.

But those benefits are waning as shipping trends change.

Pressure is growing with every orca death to breach the dams and give endangered fish a greater chance of survival.

This summer, NOAA Fisheries ranked the most important chinook stocks for the critically endangered orca. Two of the top 10 come from the lower Snake River. Three more stocks are from the Columbia.

In the first few months of the year, the southern resident orca can be found at the mouth of the Columbia River to feast on spring chinook as the salmon migrate upstream to spawn. Historically, adult salmon returns to the Columbia Basin were believed to be between 10 and 16 million fish per year. Today, the returns are a small fraction of that.

Years before the government listed the southern resident orca as endangered, salmon advocates were already fighting to breach the dams.

In 1995, the U.S. Army Corps of Engineers, which operates the dams, began a study looking at ways to increase juvenile fish survival.

Even though that study found that dam breaching had “the highest probability” of fish recovery, the corps instead opted to make major dam improvements, in part, because the chosen option had “minimal economic impacts.”

The river economy is changing. Since the start of that study in 1995, total tonnage shipped on the Snake River has dropped 50 percent.

The decline is largely because of two major trends: Portland stopped accepting container shipments, and new, high-capacity rail-loading facilities drew customers away from the river.

But for some, the dams are still an integral part of their lives, from the grain merchandisers above the dams that might have to change their businesses if the Snake becomes too shallow for barging, to the farmer who might have to truck farther to get to a river barge on the Columbia or turn to rail.

"If I can even get it there," Berg said. "Sometimes the rail system, for lack of a better word, is just plugged up. You can’t even get the rail cars."

One four-barge tow carries the same amount of grain as 140 railcars or 538 trucks. Farmers are concerned that if the Snake River dams are breached, they'll face backups for barging on the Columbia River or burden the roads with more trucks.

Still, Jim Waddell, an advocate for breaching the dams and a retired civil engineer with the Army Corps of Engineers, claims the Snake River transportation function can easily be replaced.

"We’re not gonna put, like the pro-dam people say, hundreds of thousands of trucks on the roads," Waddell said. "It’s the same number of trucks; the only difference is instead of going to a grain elevator that goes to the river, some of those farmers will be taking it to a grain elevator on a railroad siding."

The railroad would need some improvements to handle the load. The corps had previously estimated that would cost about $50 million. Grain elevators would also need multi-million-dollar adjustments.

What cannot yet be accounted for is decline in competition. Pro-dam advocates argue that affordable barging on the Snake keeps rail costs low, even if barging has steadily declined the past two decades.

For both sides of the dam breaching debate, the question is simple: Is it worth it?

"What we can’t afford to continue to do is continue to put money in the kinds of programs that we’ve been doing for the past 20 years that have cost so much and yielded so little," said Joseph Bogaard, executive director of Save Our Wild Salmon.

Because of that investment, fish survival has improved but it hasn’t been enough to delist the many stocks from the Endangered Species Act.

As a result, many fighting to breach the dams argue that major investments to the dams have not worked and breaching is the only option left to consider for fish recovery.

Farmers argue that with the dams, there’s too much to lose. Conservationists argue the same.

There is no one silver bullet to saving the orca. Science shows breaching dams give salmon the best shot at survival, but if the decision to breach were simple, the Snake River would already be a free-flowing river.

This is the second installment of our series on the complex issue of breaching. In the next few weeks, Q13's Simone Del Rosario will look at the regional impact on power with and without the dams and cover the federal fight that has already started.