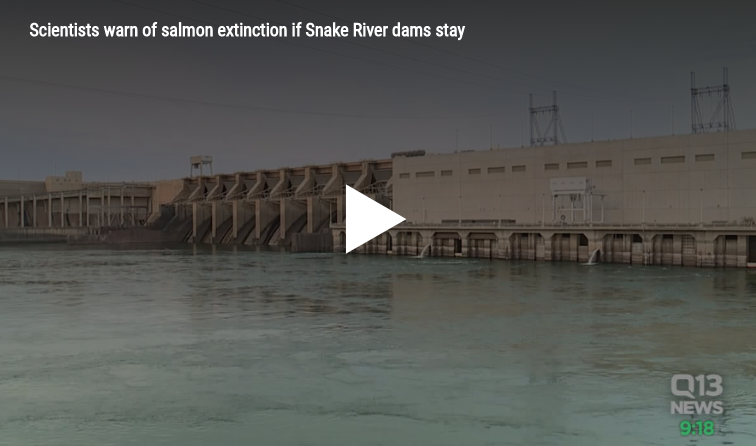 SEATTLE -- Dozens of scientists are urging lawmakers to breach four dams along Eastern Washington's Snake River, declaring salmon are at risk of going extinct if they don't. In a letter signed by 55 scientists, representatives from Washington, Oregon and Idaho declared that hot water is harming salmon and steelhead in the Columbia-Snake River Basin. They say the reservoirs behind the eight dams in the system are a big part of the problem. When water temperatures rise above 68 degrees Fahrenheit, salmon die. In late summer and early fall, these scientists say the dams push temperatures more than 6 degrees higher on average, reaching dangerous thresholds. Currently, the federal government is studying the impacts the dams have on threatened fish after a federal judge ruled the last plan was inadequate to protect the environment. "They must do more than just tweak the system a bit to deal with the temperature," said Rick Williams, a former fisheries consultant for Northwest Power and Conservation Council. "We will fail to solve the hot water problem, and fail to restore salmon runs, if federal agencies select any long-term plan that does not include removal of lower Snake dams." Williams told Q13 he predicts salmon and steelhead will disappear from his home state of Idaho within 20 years if the dams remain. Congress ultimately authorizes the federal projects along the river and several members have already pushed back against calls to breach the dams, citing power production and agricultural uses as reasons to keep them. Over the years, the federal government has spent $16 billion trying to mitigate the impacts the dams have on fish. The river system is home to 13 species listed on the Endangered Species list. The endangered southern resident orcas also rely on the chinook salmon that come from the Snake and Columbia rivers.