Post Register: Without redoubled conservation efforts 'the trajectory is clear' for wild salmon 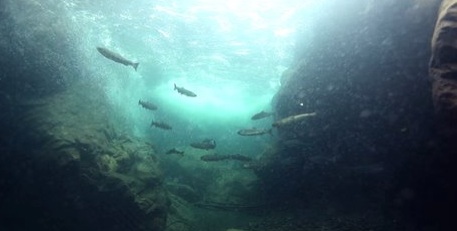 Salmon, ID — The decline of wild salmon and steelhead in the state and the prospect of a future with no fishing seasons for the anadromous fish would be a severe blow to the economies and identities of rural river communities, the head of the Idaho Outfitters and Guides Association said last week.

Speaking at a forum Tuesday that drew more than 100 area residents, Aaron Lieberman said strategies to recover the iconic fish have not been tainted by ill-intent or poorly thought out, yet they have proved ineffective.

“If we don’t do something differently and bigger, the trajectory is clear,” he said, forecasting a loss of heritage and tradition in towns such as Salmon.

“As far as the people I represent are concerned — outfitters and guides — the disappearance of these fish would be catastrophic within the industry,” he added.

Lieberman was one of several speakers focusing on the uncertain fate of the anadromous fish during a panel discussion — “Salmon: Our Fish, Our Past, Our Future” — brought by the Lemhi County Historical Society and Museum, the Sacajawea Center and Trout Unlimited River of No Return Chapter.

Lieberman said sport fishing in Idaho translates to hundreds of millions of dollars a year. He called for a show of hands from those in the audience who were either outfitters or guides or were otherwise associated in a demonstration that indicated a majority with such affiliations.

Fish advocates — and a raft of scientific studies — for the most part place the blame on hydroelectric dams tied to Bonneville Power Administration (BPA) for Idaho’s declining salmon and steelhead runs, which also are the focus of a workgroup called for earlier this year by Gov. Brad Little.

Young salmon and steelhead embark on an extended journey from their birth streams in Idaho to rivers such as the Salmon and the Snake and down the Columbia River in Oregon and Washington to reach the Pacific Ocean.

The ancient migration of the fish — born in fresh water but which undergo a metamorphosis that allows them to live and feed in saltwater — once took just days but now requires months as the weakening, coldwater salmonids attempt to overcome such challenges as the dams, slow-moving reservoirs that make them easy prey for predators and dewatering of streams for irrigation and other purposes.

If they successfully navigate their way to the Pacific, the fish may mature and undergo physiological changes that allow them to engage in an upstream migration to the freshwater streams where they were born in order to spawn.

The loss in the state of robust salmon and steelhead fisheries has unfolded over the decades even as the BPA has provided more than $16 billion to help mitigate adverse effects on fish and wildlife in the region.

The self-financed federal entity sells electric and transmission services to utilities that serve customers across the Pacific Northwest and beyond.

“We have to balance competing needs and we hear it from all sides, including customers and conservation folks,” Williams said.

Cleve Davis, a Shoshone-Bannock Tribal citizen and editor of the Journal of Native Sciences, urged for local campaigns designed to underscore to state and U.S. leaders the importance of saving fish that have immense cultural, spiritual and practical value to Native Americans and others.

“Speak up, stand up and take action,” he said, adding that successful recovery efforts must involve indigenous peoples.

Davis said the city of Salmon should develop a policy statement regarding wild salmon and its future that clearly outlines both the community’s stance and its plan.

Wayne Johnson, owner of Salmon River Rafting Co., said in an interview after the discussion that his operation has suspended steelhead trips on the Main Salmon for the past four years due to lack of fish.

“We’re very concerned; we’d love to see the salmon and steelhead numbers increase,” said Johnson, who estimated spending by the company and its guests at tens of thousands of dollars annually.

The event last week was the first in a series of four educational programs offered in cooperation with and sponsored in large part by the Smithsonian Institute and the Idaho Humanities Council, according to Lemhi County Historical Society President Hope Benedict.