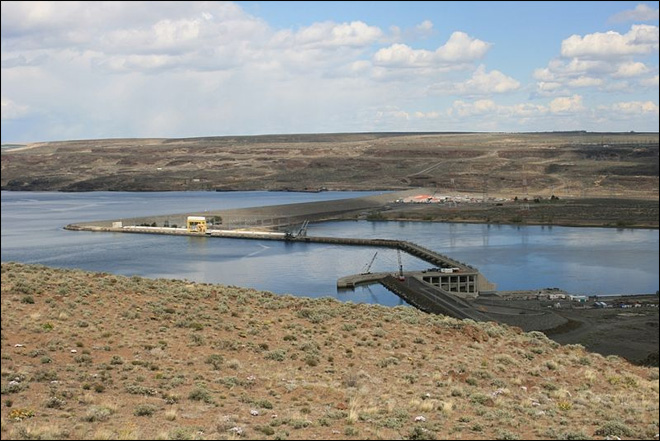 Native American tribes say not enough is being done to address an “imminent crisis” in fish passage on the Columbia River due to the drawdown of the reservoir behind the damaged Wanapum Dam in central Washington.

In late February, the dam’s operator, Grant County Public Utility District, discovered a 65-foot-long crack in a concrete spillway pier at the dam and was forced to draw down the reservoir behind the dam to relieve pressure on the structure. The utility has hired a contractor to drill core samples in the dam and determine the extent of the problem. That job should be done by June.

In the meantime, the spring fish run is getting started, and the reservoir drawdown left fish ladders high and dry, blocking 100 percent of the adult upstream passage of the salmon and lamprey. It also dramatically reduced the flow of water through the dams juvenile passage system, which the tribes contend will seriously compromise downstream migration as well. Resulting low water conditions are also affecting passage at the Rock Island Dam, upstream of Wanapum.

Grant PUD says it’s working to modify the Wanapum fish ladders so they will be operational by next Tuesday. It claims all of the dam’s downstream fish-passage features can operate under the low-reservoir conditions.

The Columbia River Inter-Tribal Fish Commission has written to the Federal Energy Regulatory Commission and the National Oceanic and Atmospheric Administration urging them to not only formally consult with the tribes on their emergency measures, but implement a variety of additional measures to ensure passage and at least two studies to track the impact of the drawdown.

Tony Lorz, a fish passage engineer for CRITFC, said the on-the-fly modification being made for upstream passage of adult fish may not be effective, particularly for lamprey, which don’t have the same swimming strength as salmon. If the modifications don’t work as intended, he said the utility and other stakeholders face a major crisis, with far more fish than they could possibly trap and haul above the dams.

Likewise, Lorz said the downstream system is compromised by a 75 percent reduction in water flows, and low water conditions that are likely to increase cavitation levels in the dam’s turbines and decrease survival rates of juvenile fish who pass through them.

“This is uncharted territory,” he said. We don’t have any data. We’ve never had to do this mid-season.”