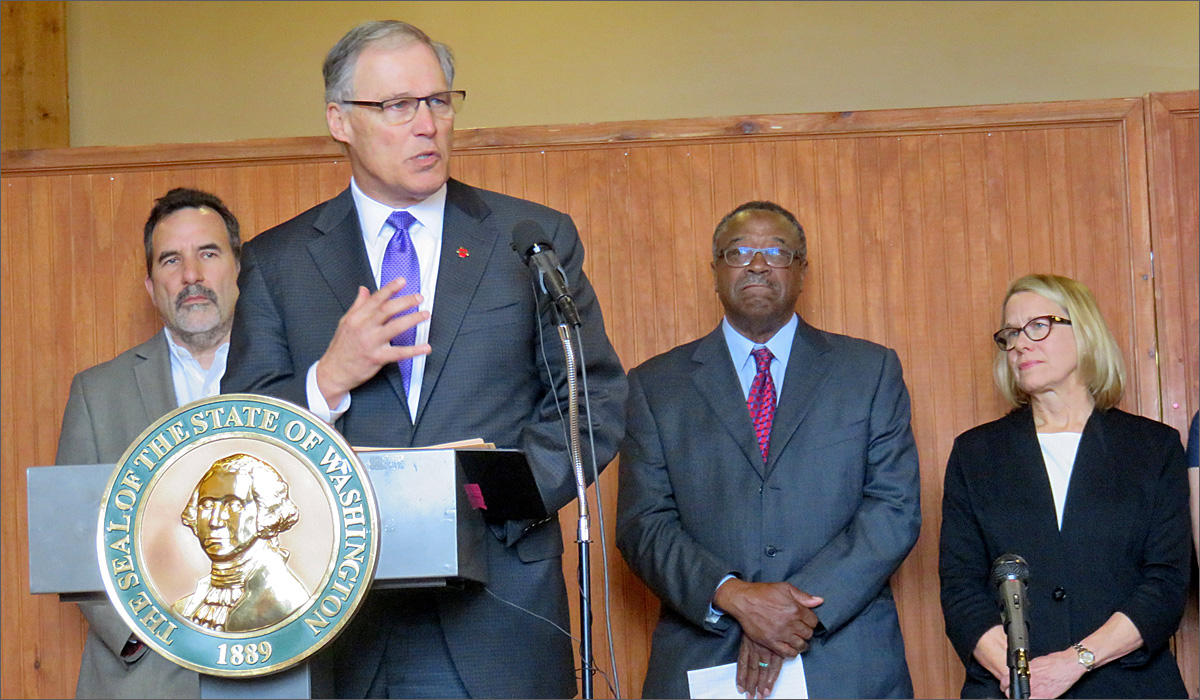 Tucked into Washington’s $52.4 billion operating budget passed Sunday night by the Legislature is controversial funding for a “stakeholder group” tasked with looking into what would happen should the four Lower Snake River dams be removed or altered. Supporters say this group will make sure Washingtonian’s voices are heard in the often contentious conversation around dam removal. Critics say the effort is a waste of time and money – too similar to a discussion already happening at the federal level. Gov. Jay Inslee had asked for $750,000, following the recommendations of the state’s Southern Resident Orca Task Force, a group created by the governor to find ways to save the orcas. “Funding the Snake River stakeholder discussions is critical for Washington communities and stakeholders to assure their voice is heard and interests addressed if the four lower Snake River dams are removed - which the science shows is essential for the salmon and orca,” said Bill Arthur, the Sierra Club’s salmon campaign coordinator, in a statement. Critics of Washington’s dam removal study have said the federal process is enough and what the governor asked to spend money on essentially duplicates the federal government’s assessment. “Calls for additional processes and forums that undermine the existing study are counterproductive, not based in science, and divert resources from the creation of a credible plan that is best for salmon and the Northwest,” Kristin Meira, executive director of Pacific Northwest Waterways Association, said in a statement. U.S. District Court Judge Michael Simon ordered federal regulators to take a hard look at all options to protect salmon, including the potential (and controversial) removal of the four dams on the Lower Snake River. “Despite billions of dollars spent on these efforts, the listed species continue to be in a perilous state,” Simon wrote. “The (Federal Columbia River Power System) remains a system that ‘cries out’ for a new approach.” That kicked off a years-long process, where federal agencies began studying ways to protect imperiled salmon on the Columbia and Snake rivers. A final decision on that study is expected in September 2020. In an earlier statement, Washington Republican U.S. Reps. Dan Newhouse and Cathy McMorris Rodgers said spending taxpayer money to look at removing or altering the dams (something they both oppose) would be a waste. “Congress has the sole authority to authorize breaching our federal dams, and as representatives of Eastern Washington communities that depend on the many benefits they provide, breaching them is out of the question. We commit to do everything in our power to save our dams,” the representatives said in the joint statement. At a salmon conference in Boise April 23, Michael Garrity said there’s “new urgency” around these issues in the state because of the connection between salmon and orca health. Garrity is the Columbia River and Water Policy Manager for the Washington Department of Fish and Wildlife. “There’s a call for exploring the social and economic benefits of breaching the Lower Snake River dams,” Garrity said during a panel. At the same conference, Rep. Mike Simpson, R-Idaho, said he has started to ask “what if” questions, looking more deeply at what should happen if the dams are removed or altered. What happens to Lewiston (the most inland port in the West)? What happens to farmers? How do growers transport their grains? “There are an awful lot of questions that have to be asked, because you need to address these if you are going to solve this problem,” Simpson said. Simpson challenged the group to come together to save salmon. Conservation groups are now drawing comparisons to that challenge, with the funding of Washington’s stakeholder task force. “We are encouraged to see leadership emerging in both states. The problems facing salmon, orca and energy in the Northwest can’t wait,” said Sam Mace, Inland Northwest program director for the Save Our Wild Salmon Coalition, in a statement. The funding ask was the result of recommendations from the Southern Resident Orca Task Force. The whales mainly feed on chinook salmon. Their population has dropped to 74 orcas, as they face threats from a dwindling food supply, water pollution and vessel noise. (The task force did not recommend breaching the dams.) In the budget, the stakeholder forum funding will be split between fiscal years 2020 and 2021. “Should it be determined that it’s time for the dams to be removed, then communities must have the opportunity to collaboratively develop a transition plan to ensure the region’s needs will continue to be met. We must insist on a path forward that works for salmon and people,” said Wendy McDermott, Puget Sound and Columbia Basin director of American Rivers, in a statement.